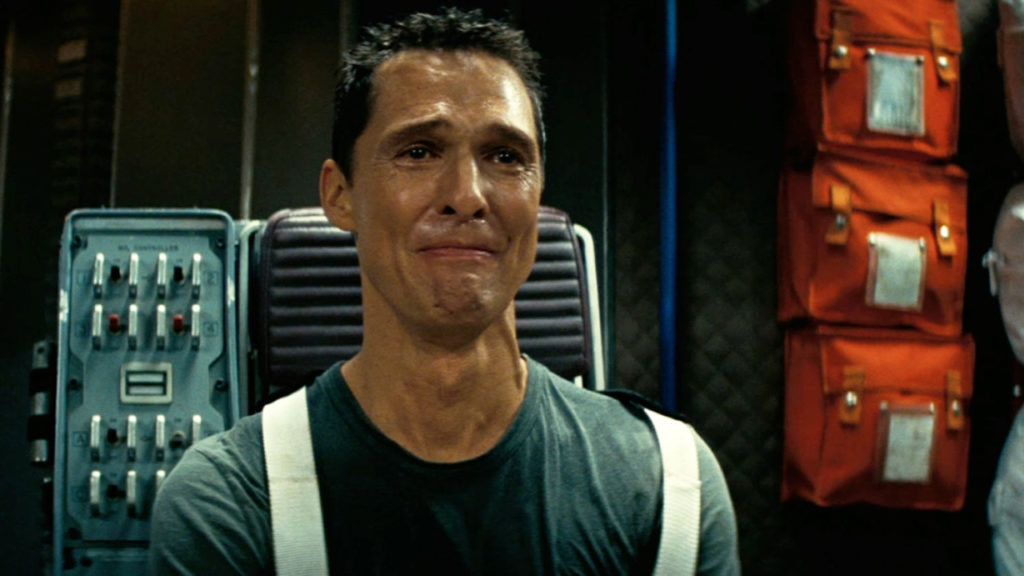 In my Best of 2016 Year-Ender list, I coined (to the best of my knowledge) the phrase “Sci-Fi Weepie” to describe Denis Villeneuve’s alien-contact epic Arrival. At the time, I used the term as a pithy, perhaps glib descriptor for the mind-bending, heart-wrenching work. The idea has stuck with me, though, to the point where I’ve casually used it in conversation, as if it’s a universally recognized subgenre that exists in circles outside my own head. So I figure I should expand upon the concept, if for no other reason than to make myself marginally less maddening to talk to.

In essence, the Sci-Fi Weepie is a film which uses the unfathomable hugeness of space and science to push its characters– and its audience– into unimaginable emotional and/or ethical territory. Most frequently, Sci-Fi Weepies are prestigious, high-budget affairs; they have to be, really, in order to attract actors with the gravitas necessary to keep the material from lapsing into camp In my mind, the quintessential Sci-Fi Weepie is Contact, Robert Zemeckis’ 1996 adaptation of Carl Sagan’s novel of the same name, starring Jodie Foster as a brilliant scientist attempting to reconcile alien communication with her issues of faith, family, and Gary Busey’s weird son. A.I. is another example, as well as last year’s underseen stage adaption Marjorie Prime. One could make an argument for Gravity or The Martian, though both of those films are grounded enough (so to speak) that I’m more tempted to file them alongside man-vs-nature survivalist films like 127 Hours and Alive. Duncan Jones’ excellent Moon arguably fits the bill (despite being more comedic than most), as do select episodes of Black Mirror, and even The X-Files. And it’s been too long since I’ve seen them, but one could probably make an argument for Cocoon and Spielberg’s War of the Worlds as well. These are all obviously very different works, but they all feature equal parts childlike wonder, wry social commentary, and ugly-crying. 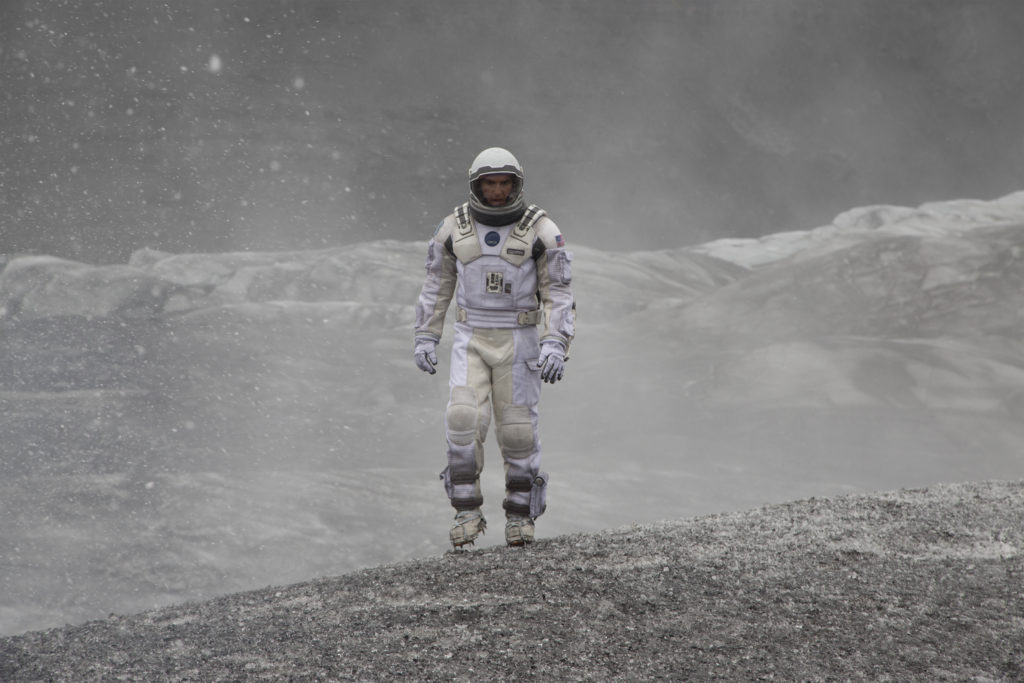 In all of these regards, few films can match Interstellar, Christopher Nolan’s sprawling, polarizing follow-up to his world-dominating Batman trilogy. Interstellar is a big film in just about every imaginable way: in heft (nearly three hours!), in star power (including a handful who had yet to ascend at the time, like Timothee Chalamet and David Oyelowo), and not least of all in scope. From the opening moments– Ellen Burstyn speaking to the camera, faux Ken Burns-style, about a dust bowl which has yet to occur– the film is practically bursting with ideas, unveiling a new concept which could easily carry a weepie of its own roughly every twenty minutes. Even many viewers enamored with the pop-cerebralism of The Dark Knight and Inception felt it was a bit much; its dizzying visuals and pummeling sound design (augmented, naturally, by Zimmerian bombast) sparked waves of headaches and nausea in Nolan’s preferred 70mm Imax, and the film only sparked below-the-line interest in that year’s Oscars. Personally, though, I loved it, and have returned to get wrecked by it several times since its release.

As previously mentioned, the film takes place in a not-too-distant future where the world’s crops have largely withered and died, returning all human civilization to Arbus-like malaise. Matthew McConaughey plays “Coop” Cooper, a former pilot who desperately tends a dust farm, along with his aging father (John Lithgow), moody son, Tom (Chalamet), and spunky daughter, Murph (The Conjuring’s Mackenzie Foy). For somewhat murky reasons, it is now the official line of the government and public school system that the space program was a hoax. Coop, however, suspects otherwise, and through the guidance of what may or may not be a ghost (more on that later), he stumbles his way into what remains of NASA (including Michael Caine, Anne Hathaway, and others), who draft him into a desperate hail-Mary play to save humankind. 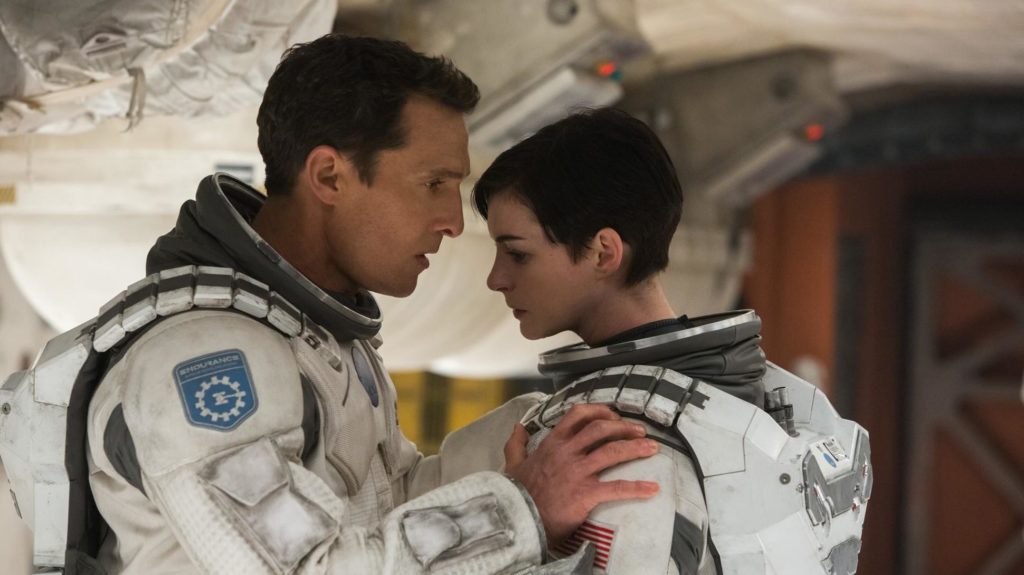 I’m going to stop my synopsis there for a few reasons. First, obviously, is spoilers; if you haven’t seen it, you really ought to go in mostly blind. The second is that you’d quickly get tired of it if I tried. As I said before, Interstellar is essentially a series of heady ideas and breathtaking setpieces, which is thrilling to watch (to me, anyway), but on paper would quickly devolve into a series of “…and then THIS happens.” The film spans galaxies, multiple time periods, and a few separate casts who barely interact with each other. As I said, there seems for a while to be a subplot involving a haunted house, which ultimately turns out to be something infinitely stranger. In my year-end list for 2014, I compared the film to a sprawling rock double album– The Wall, The White Album, Daydream Nation— mixing moments of brilliance with curious non-starters, but creating something greater than the sum of its parts. Without giving too much away, a few of my favorite bits: TARS, a boxy robot remarkably played through practical effects by the great physical comedian Bill Irwin; a deafeningly silent water planet; an epiphany by a grown Murph, now played by Jessica Chastain (which places Interstellar in another of my favorite contemporary microgenres, the “Get Out Of The Way And Let Jessica Chastain FIX This” movie); and a surprisingly unhinged turn by a super-secret third-act guest star.

But the third reason I don’t want to get into the plot details is this: they’re kind of beside the point. The defining image of Interstellar is not any of its sprawling planetscapes or dust-bowl tableaux, but the oft-memed shot of McConaughey weeping over his messages from Earth. Interstellar is a movie of big ideas, but they only mean anything inasmuch as they affect the characters. The characters are defined by their emotions: McConaughey’s passionate outbursts, Hathaway’s brittle desperation, Chastain’s righteous fury, Caine’s wizened melancholy. This is the essence of the Sci-Fi Weepie: space may be big, but it’s nothing compared to the expanses of the human heart. Interstellar may not be for everyone, but for my money it’s one of the niftiest space epics in recent memory, and worth at least one big screen viewing for anyone interested in heady Hollywood spectacle. Just bring some Kleenex. And a Dramamine.