Three vignettes offer insight into three different women’s lives in Montana in Kelly Reichardt’s Certain Women.  The triumph of the film is not just in its direction or the realism with which it portrays women and their relationships. For the first time in Reichardt’s 22 year career as a director, Certain Women crossed the $1 million mark at the North American Box Office, topping off a pretty good year for female filmmakers in general.

Based on short stories from the collection Both Is the Only Way I Want It by Maile Meloy, Reichardt’s rendition paints a portrait that is at times a bleak picture of loneliness and depression in a remote corner of America, and at others a highly realistic portrayal of relationships. Her depiction of Montana is dotted with sprawling landscapes that have a luminescent feel to them, rendered in wintry tones.  The opening shot, a characteristically long one, remains steady as a train approaches from a distance, toy-like in its diminutive size from afar. It passes, undisturbed and carrying on with its business, whatever that may be.

Much of Certain Women chronicles small, meaningful moments – the kind of thing that one of the film’s leads, Laura Dern, has called “life that happens in the pauses” in the “space where no one’s watching.” Both Laura Wells, played by Dern, and Gina Lewis, portrayed by Michelle Williams, grapple with the reality of being talked and looked over, and having their expertise overshadowed by male counterparts – a familiar plight for many women. Laura, a lawyer in Livingston, deals with a disgruntled client who won’t accept her counsel but who, upon hearing a second opinion that exactly resembles the first, immediately accepts it, presumably because it comes from the mouth of a male lawyer. Gina, who runs a business with her husband Ryan, silently tolerates numerous interruptions by an elderly friend, Albert, who seems only interested in talking to Ryan. Later, upon seeing the names of both Gina and Ryan on a business card, Albert assumes that Ryan helms their business as boss – but it is actually Ryan who works for Gina. 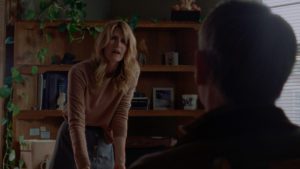 Although there’s no obvious timeline or concern with chronology – that is to say, chronology does not play into any of the storylines as a structural component – Certain Women unfolds in wintertime, and brutal cold provides a backdrop for much of the film’s emotional tension.  The cold is palpable but not unbearable; its characters trudge through it, and so do we. The cold gives a crisp edge to Reichardt’s portrait-esque shots of mountainous landscapes, and to the general air of Montana’s urban and rural settings (of course, urban here means something less built-up than what we might imagine with east- or west-coast mindsets). 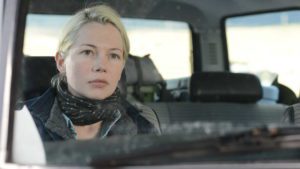 Perhaps the most emotionally compelling of the three vignettes is that which follows Jamie (Lily Gladstone), who’s working alone on a ranch for the duration of winter (a seasonal job, she explains).  Here, we see the closest approximation to a typical narrative structure in all of Certain Women.  Jamie drives aimlessly through town – Belfry, MT – in which she evidently knows nobody, and happens upon a night class taught at the local school by a timid Beth (Kristen Stewart). Jamie’s fixation on Beth sets up a kind of tragic romance between the two of them that is brutally realist at its core. 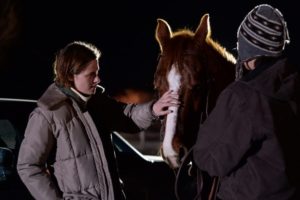 There’s much to be said of Certain Women’s simplicity, along with its realist portrayal of life in a place that for many of us is ‘out there,’ in the endless expanse of territory that separates the bustling coasts of the US. Simplicity is a necessary component of the overlapping stories of Laura, Gina, Jamie, and Beth.  Many filmmakers have developed styles or experimented in the overlapping-story narrative format, to varying degrees of success.  What strikes me most about Reichardt’s film on interconnected lives is that they don’t actually connect that much. They do so at the edges or in corners that gently elbow one another. In this approach there are many silences as Laura, Gina, or Jamie contemplate their circumstances, or are visibly anguished by the conditions of their lives.  Lingering shots allow us to take in the breadth of their dilemmas, those ongoing frustrations that nag at their ability to be these ‘certain women.’ This snapshot view into their lives is altogether illuminating, gnawing at the mundane and everyday qualities of life that lay bare the seeds of change, whether we perceive them or not.