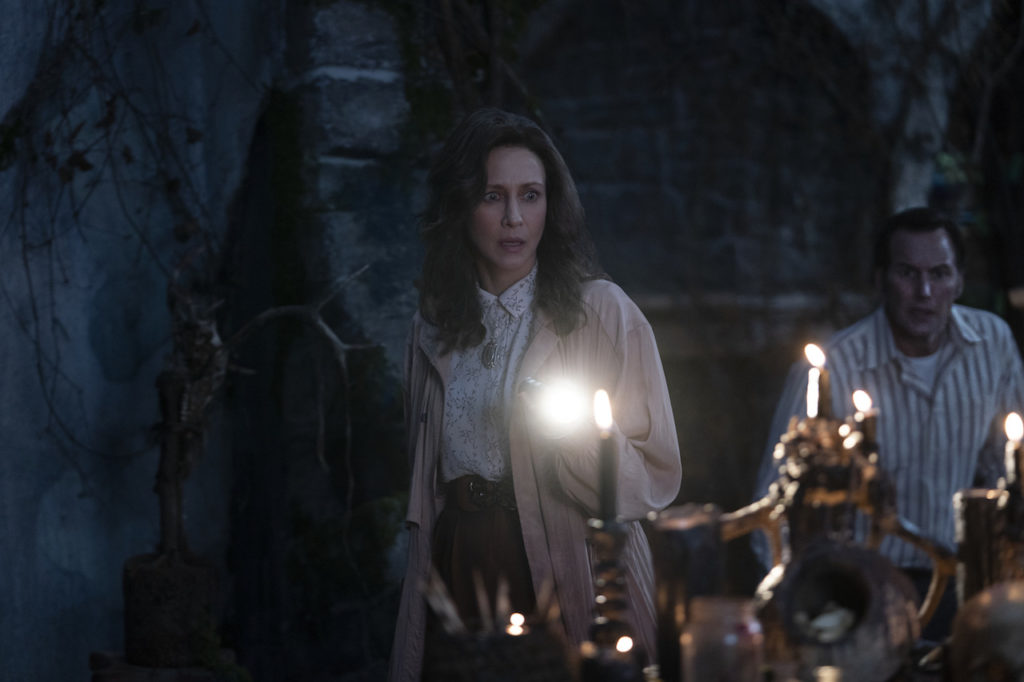 (L-r) VERA FARMIGA as Lorraine Warren and PATRICK WILSON as Ed Warren in New Line Cinema’s horror film “THE CONJURING: THE DEVIL MADE ME DO IT,” a Warner Bros. Pictures release.

Another week, another press screening of a horror tentpole sequel.

I kid, somewhat– the novelty of returning to the movies still hasn’t worn off for me, and I suspect it won’t for some time– but it’s still funny to me that, so far, my theatrical beat has consisted entirely of big-studio horror franchises. I made my return to cinemas last month with Spiral, the Chris Rock-led ninth entry in the “book” of Saw, followed by the horror-phenom follow-up A Quiet Place Part II. Officially speaking, The Conjuring: The Devil Made Me Do It is the third entry in that slick ghosthunter saga, but if you include the assorted spinoffs and acquisitions of its peculiar “cinematic universe,” it’s technically the eighth. And while the bar has perhaps been set low, I have to give it credit: if you can only see one summer blockbuster scarefest once you hit your two-week mark, this is the one to see.

Like its predecessors, The Devil Made Me Do It is very loosely inspired by the case files of real-life paranormal investigators Ed and Lorraine Warren (here played winningly once again by Patrick Wilson and Vera Farmiga). In the cold open, the Warrens successfully exorcise a demon possessing young David Glatzel (Julian Hilliard). What they do not realize is that, in the midst of the chaos, the possessing spirit was actually sucked out of David and into his older sister’s fiance, Arne Johnson (Ruairi O’Connor). Sure enough, Arne is soon haunted by dizzying hallucinations and visions of a sinister woman in black (Eugenie Bondurant). One thing leads to another, and eventually Arne is found wandering down the highway covered in a drinking buddy’s blood. Convinced that he’s possessed, Arne calls the Warrens back for his murder trial, in which they find themselves compelled to convince a jury of the existence of the Devil.* Puzzled by the facts of the case, the Warrens do some additional investigating, and soon realize that the case may be stranger than even they initially realized.

The Conjuring series– the main line, that is, as opposed to the Annabelle/Nun/La Llorona spinoffs– is unusual among horror franchises. The films are punctuated by intense blasts of gnarly, J-horror-inspired scares, but they are primarily defined by the positively wholesome relationship between their central characters. The Warrens were, of course, real people (Lorraine even supervised on the series prior to her death in 2019), and Wilson and Farmiga play them with the gravitas of any Oscar-bait biopic. Simply put, there aren’t many summer blockbuster movie franchises– let alone horror movies– centered on a friendly, religious, middle-aged couple who love each other very much. Even if you don’t believe a word of the Warrens’ real-life adventures, or agree with their theological bent, Wilson and Farmiga bring such a warmth to these films that they’re difficult not to enjoy. Make no mistake, these are loud, aggressive horror movies filled with mutilation and bodily fluids, yet they’re somehow also movies you could take your mom to.

RUAIRI O’CONNOR as Arne Johnson in New Line Cinema’s horror film “THE CONJURING: THE DEVIL MADE ME DO IT,” a Warner Bros. Pictures release.

I wrote last week about the unsettling political undertones of A Quiet Place Part II, and I’d be remiss if I didn’t note that The Devil Made Me Do It has its share as well. The early ‘80s setting, combined with the stonefaced discussions with law enforcement about covert Satanic rituals, can’t help but bring to mind the real-life “Satanic Panic” of the time, in which the newly ascendent religious right whipped up a public hysteria about supposed cells of occultists sacrificing children and animals in suburban America. This was, of course, bullshit designed to be used as a cudgel in the Reagan-era culture war, but it ruined a lot of innocent people’s lives, and there is a direct line which can be drawn from Pat Robertson ranting about Dungeons & Dragons to the gibbering QAnon theories currently radicalizing our elders (for more on the subject, I recommend Penny Lane’s excellent documentary Hail Satan?). To hear characters earnestly discussing these Satanic rituals as if they were a real thing that happened is unnerving, to say the least.

But just as the ‘80s Satanic Panic was accompanied by a wave of objectively badass heavy metal and slasher movies, The Devil Made Me Do It illustrates its themes with wave after wave of boss Satanic imagery. While investigating Arne’s house, they discover a “witch’s totem” which appears to be a doll with a head made out of coyote jawbones, and I’ve never wanted a piece of movie tie-in merchandise more badly. Later, they visit the home of a retired priest who blew the lid off a sinister devil cult (John Noble, essentially reprising his mad scientist character from Fringe), and he brings them into his basement full of ebony baphomets, goat skull chalices, and other accoutrements of the occult. I’m a sucker for the cornball devil-horns aesthetic that came into vogue with Anton LaVey and his swingin’ ‘60s brand of Satanism, and it’s rare to see it translated to screen in this day and age with this level of care and high production values. Filmmakers have used moral posturing to get prurient interests on screen since the days of Reefer Madness, and even if that wasn’t the filmmakers’ intention in this case, it’s the level I choose to take it on. On these terms, it’s more than satisfying.

PATRICK WILSON as Ed Warren and in New Line Cinema’s horror film “THE CONJURING: THE DEVIL MADE ME DO IT,” a Warner Bros. Pictures release.

Of course, most people don’t come to a Conjuring movie for the socio-theological implications, or even the better-than-it-needs-to-be character work; they come to be scared. The Devil Made Me Do It sees Curse of La Llorona director Michael Chaves take over for series mastermind James Wan, and while this threequel doesn’t have anything on the level of the first film’s “Hide and Clap” scene, Chaves fills Wan’s shoes admirably. The trick of the Conjuring series is to draw the viewer in with classical, Lewtonesque suspense, then wallop them with an absolute in-your-face assault on the senses (there is a gag in particular in the opening exorcism where David’s body contorts to the point where you’re not even sure what you’re looking at, and then just keeps going). There are times when the spectacle of it all threatens to eclipse the story at the film’s heart (when the climax of your demon possession film involves police helicopters, it’s probably a sign that you’re going too big), but for the most part I got what I came for.

It should go without saying that this is going to be a very weird summer. One by one, pasty morlocks will shuffle blinking into the sunlight, desperately trying to approximate what they can remember of basic human interaction. Given that, it feels appropriate that the first big, bombastic action blockbuster of the summer is not Black Widow or Fast & Furious 9 or the new James Bond film, but a dark, violent horror movie filled with defiantly unironic sentiment. This may say more about me than about the movie, but the new Conjuring gave me the widescreen, empty-calorie thrills I didn’t realize how badly I missed. Ed and Lorraine have officially joined the ranks of Hollywood comfort-characters who have been absent these past long months, and it’s a joy to have them back.

* – This subplot bears a curious parallel to the history of the Conjuring franchise itself. In 2017, Gerald Brittle, author of a book about the Warrens, sued Warner Brothers for plagiarizing his work. When Warners argued that you can’t copyright a true story, Brittle argued that it can’t be a true story, because ghosts aren’t real. This meant, in essence, that the future of a multi-million-dollar movie franchise hinged on whether or not the studio could prove the existence of an afterlife. I didn’t follow the trial too closely, but I can only assume from the fact that the films are still being made that they succeeded.

Opens in theaters Friday, 6/4 (though the Hassle recommends the Capitol or your local independent multiplex). Also streaming on HBO Max through July 4.