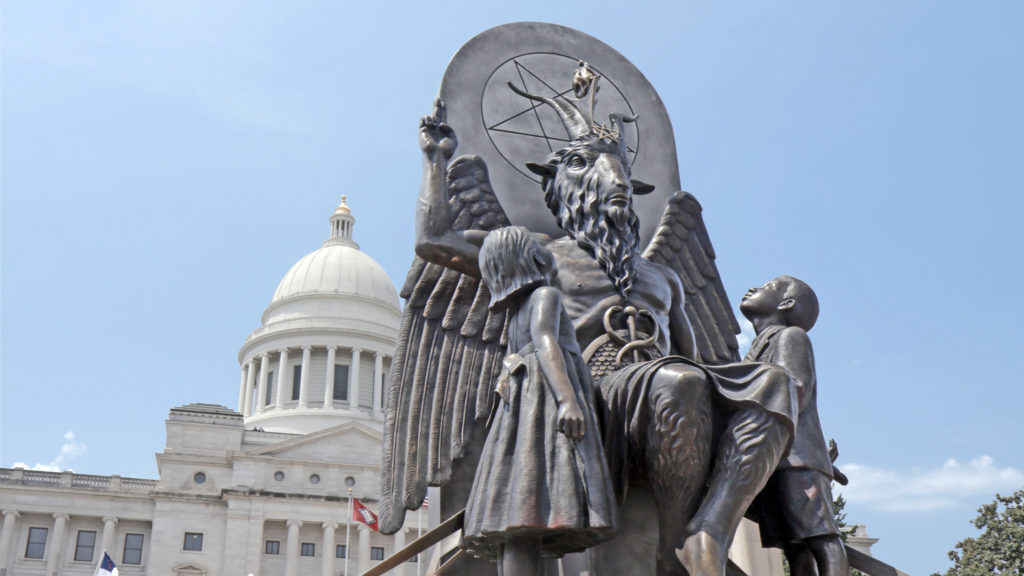 It’s difficult for me to talk about the Satanic Temple. This isn’t because I’m at all queasy about the subject matter (anyone who knows me can tell you that’s far from the case), or because I have any objections to their beliefs or actions. Quite the opposite, in fact: when describing the group’s highly publicized public actions, which lionize free speech and point up the hypocrisy of America’s so-called “moral authorities,” the phrase I keep gravitating toward is “They’re doing God’s work.” I stop myself, realizing how absurd this statement is on its face, only to find myself nearly uttering the even more absurd “God bless the Satanic Temple.”

These contradictions, of course, are at the heart of this Salem-based organization, the focus of Penny Lane’s fantastically entertaining new documentary Hail Satan? Like most modern Satanist organizations, the Satanic Temple (or TST) isn’t exactly a religious group, but rather a riposte to the idea of religion. What sets TST apart from their diabolical peers, however, are their completely earnest belief in freedom of religion, their remarkable knack in using the system’s tools against its abusers, and the fact that, judged strictly by their actions, they’re honestly pretty hard to take issue with.

A little background, in case it’s still needed: modern Satanism, as codified in the mid-’60s by former lounge organist Anton LaVey, is specifically not centered around worship of a literal, personified devil, but rather uses the idea of Satan as a symbol of rebellion against organized religion in general (and American Evangelicalism in particular). But where LaVey and many of his followers at times used his writings as an excuse for do-what-thou-wilt hedonism and objectivist self-centeredness, the Satanic Temple– founded in Salem by one “Lucien Greaves” in the early 2010s– turns its energy outward, attracting headlines with a series of larger-than-life stunts to point out the hypocrisy in American attitudes toward the separation of church and state. Like many locals, I first became aware of TST when they attempted to hold a school-sanctioned Black Mass on Harvard’s campus (I tried to RSVP before the event got shut down; I got sold out, but did get to see a mass of counterprotestors from the window of the 86). As it happens, this relatively modest stunt would soon lead to more and more audacious actions, which in turn would lead to national attention and, in many cases, real social and legislative change.

Like such flamboyantly satirical activists and groups as Earth First, the Yes Men, and Joey Skaggs, TST’s actions are specifically engineered to be both sensational enough to attract media attention, and telegenic enough to spread through viral channels. The group’s most famous trick (which forms the backbone of the documentary) is traveling to towns with monuments of the Ten Commandments in front of their courthouses, and petitioning to install their own massive, bronze Baphomet statue next to it. If one religion’s iconography is allowed, they reason, they need to allow all religions equal space, or be in violation of the first amendment. Unsurprisingly, they have yet to find a courthouse that will take in their Dark Master (the statue is currently on permanent display at TST’s Salem headquarters, where you can pay to take pictures on its lap like Santa), but they have successfully gotten the Commandments removed from a handful of cities, which was their true goal in the first place. 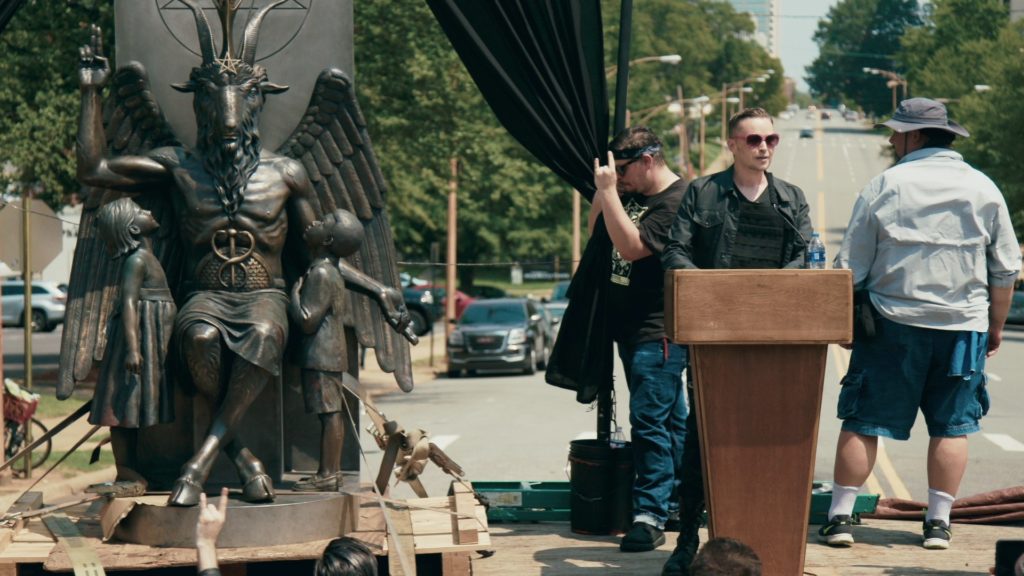 Director Penny Lane is one of the most interesting voices in documentary film today; most recently, she was brought to the Brattle by The DocYard to showcase The Pain of Others, a fascinating and disturbing look into the online community of “Morgellons” sufferers. Unlike that movie (assembled entirely from YouTube clips) and Lane’s previous work (the documentary/animation hybrid Nuts!, the postmodern presidential collage Our Nixon), Hail Satan? is fairly straightforward from a structural standpoint, telling the story of the Satanic Temple via talking head interviews and footage of their greatest hits. This is probably the smartest approach for the subject matter at hand: the Temple’s stunts are inherently entertaining, after all. Instead, Lane uses her found-object aesthetic to complement the subject matter with a dizzying array of sources, from Häxan to a number of hilariously hokey Biblical reenactment films, to the prerequisite Satanic Panic news clips from the ‘80s to today. On a more conventional front, Lane also speaks to a number of legal and religious experts to unpack the group’s techniques, viability, and the jaw-dropping origins of all those Ten Commandments monuments.

But, of course, the star of the show is the Satanic Temple itself. The face of the movement is Greaves himself, who, along with Lane, was present at the film’s area premiere at the Boston Underground Film Festival last month, and will return to the Coolidge this Sunday (interestingly, Lane and Greaves first met at BUFF a few years ago, when Greaves introduced the excellent cult doc Sympathy for the Devil). Greaves admits to being a somewhat reluctant mouthpiece (early stunts, as when the group spoke out in “favor” of Rick Scott’s endorsement of prayer in public schools, had him hire an actor to serve as frontman), but he does his job well, striking an articulate, Puckish (or at the very least Buscemic) figure as he essentially narrates the film. His strongest counterpoint in the film is Jex Blackmore, former head of TST’s Detroit chapter (whom you may remember from local news interviews for her role in the Harvard mass). Blackmore is wildly charismatic, and her brand of Satanism is far more radical and theatrical than Greaves’ measured, calculated approach. Blackmore was eventually excommunicated for making inflammatory statements that put the group in dicier legal territory, but her performances (including a bondage-clad “adult baby” parade encircling a group of pro-lifers) provide the film with some of its most unforgettable images.

That being said, perhaps the most remarkable thing about the film is how fundamentally decent most of these Satanists appear. Throughout the film, Lane speaks to a number of “parishoners” from chapters across the country. While many fit the “type” that one might expect (eg. leather jackets, battlevests, a lot of pretty fantastic tattoos), the interviewees are remarkably diverse, and all speak to the sense of fellowship and belonging they found in TST that was lacking in their mainstream communities (as one says in a meeting, overjoyed, “You’re all real! It’s not just Facebook!”). They also seem at least as committed to doing legitimate good in the world as any “above-the-board” religious group; while it certainly seems like a joke when they adopt highways and beaches (thus forcing the county to put up public signs reading “SPONSORED BY THE SATANIC TEMPLE”), Lane then shows footage of Satanists doing their damnedest (har, har) to keep these spaces clean and beautiful. In the end, they’re not doing God’s work. They’re doing good work, plain and simple– which was the point all along.