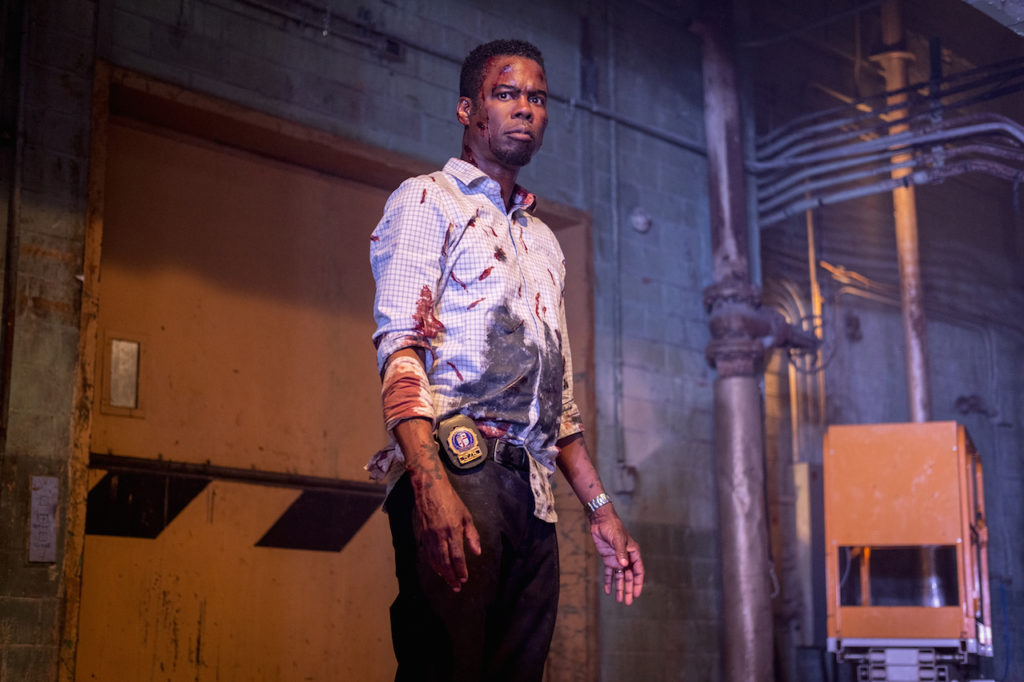 EDITOR’S NOTE: The following movie is currently playing only in theaters, and while vaccinations roll out and things gradually seem to be improving, please remember that we are still fighting a global pandemic. Before attending a movie (or any other indoor event), please consider your own vaccination status, the safety of those around you, and your own personal comfort level. We’re almost through this, but please be safe.

Before I begin this review in earnest, let me get this out of the way: on Tuesday of this week, I saw Spiral: From the Book of Saw in an actual movie theater. It was, by my count, the first time I had set foot in a movie theater in 426 days,* by far the longest I’ve gone without going to the movies in at least twenty years. Walking into the desolate AMC Boston Common was, as predicted, a surreal experience, but it was nothing compared to the experience of the movie itself. As the film started rolling, I actually found I had to retrain myself to watch a movie on the big screen (where do I even look?!), and completely ordinary establishing shots of downtown Toronto had me gasping at their beauty. At one point early on in the film, a train barrels toward the camera, and I literally found myself jumping in my seat like some 1890s rube. So please bear this in mind as you read my review, and weigh my opinions accordingly. Is Spiral “cinema?” Maybe not, but it’s still the goddamn movies.

Given my druthers, Spiral probably wouldn’t have been my first choice as my triumphant return to the theater, but it’s an odd enough duck that I couldn’t pass it up: a new installment in the long-dormant torture-porn franchise starring comic great Chris Rock, from an idea Rock apparently pitched to the studio himself. Rock plays police detective Ezekiel “Zeke” Banks, a man with few friends on the force thanks to his personal fight against police corruption and brutality, but with a secure job thanks to his legendary ex-chief father (Samuel L. Jackson). While investigating the gruesome death of a fellow detective, Banks receives a taunting recording on a USB drive which bears all the hallmarks of legendary serial killer/game enthusiast John “Jigsaw” Kramer. Of course, Jigsaw died several movies ago, so it’s up to Banks and his rookie partner (Max Minghella) to crack the case before more cops die ironic, outrageously goopy deaths.

At risk of having my horror card revoked, I feel I should confess that I’ve only ever seen the first two Saw movies; I considered binging the remaining six (!) leading up to the release of Spiral, but then I realized that I really didn’t want to. I was worried that my unfamiliarity with Jigsaw lore would leave me lost in this nine-quel, but Spiral plays more like a spin-off (a sawed-off?) than a true continuation. If you have a general idea of what Saw is, you’re probably good to go: in a nutshell, a psychopath abducts those he considers morally deficient and places them in sadistic traps in which they must choose between death or a fate worse than (spoiler alert: they almost always experience both). Truth be told, Spiral’s connection to the original is tenuous enough that it probably could have been released as a simple knock-off, but I suppose “This looks like Jigsaw’s work” sounds better coming out of characters’ mouths than “This is just like that movie Saw.”

Of course, this is a Saw movie, with all the tics that have become series trademarks: the sickly post-Fincher lighting, the sinister “Play Me” cassettes, the herky-jerky nu-metal-video camerawork, the incredibly graphic gore effects (director Darren Lynn Bousman is a veteran of the field, having helmed Saws II through IV). If you’re not a fan of the series, or if the very idea of sitting through an installment is repellent to you, you can probably sleep easy knowing you don’t need to start now. Yet Spiral brings just enough new to the table that one can see why Rock was drawn to the project. Like many movies set to release this year, Spiral was originally set to come out in 2020. It is, of course, impossible to know what it would have been like to watch this film in an alternate timeline in which the world was not turned upside down, but arriving as it does in 2021, it can’t help but feel eerily timely. Simply put, Spiral is a horror movie for the ACAB era. Unlike previous entries, which take a generalized approach to the scum of the earth, this newly minted killer exclusively targets crooked cops, lecturing them for lying on the stand and taunting them with suppressed bodycam footage of their misdeeds. Nearly every single scene hinges on the seamy underbelly of law enforcement, and Banks’ pariah status shows how ineffective a “good cop” can be when placed in a rotten environment. The theme even extends to the killer’s sense of style, replacing Jigsaw’s penchant for devil dolls with a grotesque, pig-themed motif. Just as Get Out wrapped filming before Trump’s election, Spiral benefits from its ability to read the room before subtext becomes text.

What are we to make of Spiral’s anti-cop bent? After all, our hero, however ostracized, is still a lawman, and of course we probably aren’t supposed to root for the serial killer. Yet horror has always served as a perverse catharsis against those we can’t stand. Of course we empathize with the protagonists, and we squirm and gasp when they meet their ends. Yet there’s that undeniable part of our lizard brains that wants to see the masked psychopath kill those obnoxious teens, that wants to see those hordes of the undead lay waste to the gaudy shopping mall, that wants to see the cultists burn the shitty boyfriend alive. Horror movies– the defensible ones, anyway– don’t promote violence, but they do give us an opportunity to have our cakes and eat it too. I don’t think I’m too far out of line when I say that many viewers will take some satisfaction in this killer’s modus operandi, even as they shield their eyes and shout at the screen. I wouldn’t be surprised if we see more slashers mine similar territory in the months and years to come. So is Spiral a “good” movie? I wouldn’t go that far. Like the films of the series’ Bush-era heyday, there is a rote mean-spiritedness to the proceedings that keeps it from being quite the pleasure it might be. Rock carries much of the film with his effortless charisma, but the film’s straightforward Dirty Harry machinations don’t give him much room in which to play. (Jackson, for his part,  is never unwatchable, but this is clearly another one of those paycheck projects in which he barely needs to get out of his chair, and there are about five too many “cute” callbacks to his previous films). Even in Saw terms, I had a problem with the logic of the killer’s nefarious “games.” I’m not talking about the ludicrous impracticality of the traps, which would seemingly require both an engineering degree and an artist’s grant to pull off; at this point, the outlandishness is a series feature rather than a bug. But the wit of Saw, such as it is, lies in the devilish simplicity of the victims’ “choices”– take, for example, the quintessential gag from the fist film, in which Cary Elwes’ Dr. Gordon must saw off his own foot in order to escape. The traps in Spiral are set up similarly, but it’s rarely clear how the self-mutilation option will save the hapless victim from death. In the end, it’s largely moot– it’s not like any of them are going to live to see tomorrow– but without that element of playing “What Would You Do?” the format is much less fun.

Still, I have to hand it to Spiral: it takes an exhausted franchise and attempts to not only do something new with it, but actually say something. Just as Godzilla was a manifestation of the horrors of the nuclear age, and Romero’s zombie films served as grim state-of-the-union addresses, Spiral articulates the anxieties of its particular moment within the comforts (such as they are) of genre entertainment. And look: I’ll admit that I may have been dazzled by my reunion with the silver screen, but I was sucked in, and so help me I actually found myself caring about this gross little story. After all, it’s 2021, and at this point a film about people getting dismembered in dingy basements qualifies as escapism.

* – Barring one special-occasion private rental, but that’s a story for another day.