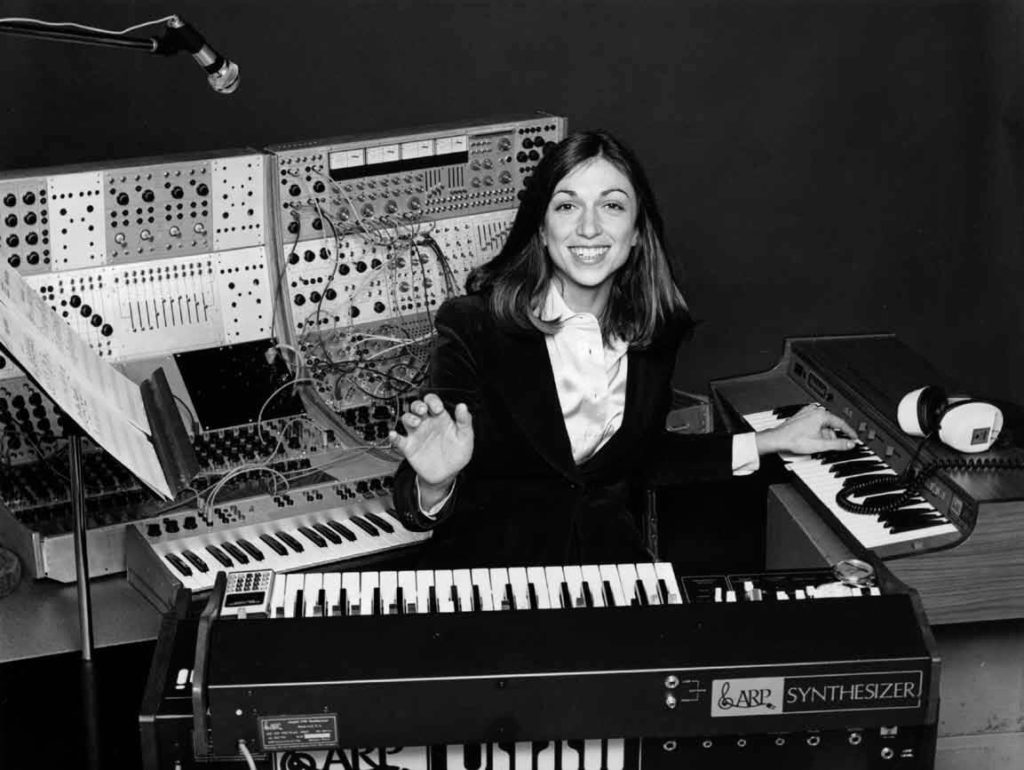 Suzanne Ciani, one of the subjects of SISTERS WITH TRANSISTORS. Photo courtesy of Suzanne Ciani and Metrograph Pictures.

Depending on how you look at it, one of the most inspiring and/or frustrating things about history is learning about the hidden contributions women have made to any given field– inspiring because of the vitality and invention of their work, frustrating because their contributions are perennially ignored by the white, male stewards of history. This is particularly true of music in the latter half of the twentieth century, dominated as it is by swaggering rock gods and anointed Tortured Geniuses. But there is, as always, a secret history: while men were strutting around on stage, a remarkable number of women were toiling away in cluttered offices, harnessing technology to create strange sounds that would cast a long shadow over the decades to come.

In her new documentary, the irresistibly titled Sisters with Transistors, Lisa Rovner explores the history of women in electronic music, from the 1930s (beginning with theremin virtuoso Clara Rockmore) roughly through the ‘80s (with composer and music software pioneer Laurie Spiegel). In between, the story wends its way to the BBC Radiophonic soundscapes of Daphne Oram and Delia Derbyshire, the musique concrete compositions of Pauline Oliveros and Eliane Radigue, the pop commercial nuggets of Suzanne Ciani, and the historic chart-topping success of Wendy Carlos, among others. Illustrated with a wealth of archival footage, as well as testimonials from followers and contemporaries ranging from Jean Michel Jarre to Kim Gordon, the effect is a wildly diverse, yet surprisingly linear, backdrop of music that we’ve been hearing for our entire lives, even if we didn’t always recognize it.

One of the common threads between the subjects of Sisters with Transistors is that, by and large, few of these women are “performers,” per se. This is due, at least in part, to the fact that a great deal of early electronic music was not “played” on “instruments” at all, but by manipulating tape loops, or inserting punchcards, or swapping out patch cables to find just the right configuration of feedback and echo. Watching these women work often feels less like watching a musician jam out than watching a scientist toil away in their laboratory; hearing the finished result echoing from their speakers feels more akin to sorcery. Indeed, many of these composers had to fight to get their music recognized as “music” at all: the BBC kept the Radiophonic Workshop entirely separate from their music department (leading to Derbyshire to go uncredited for the Doctor Who theme song for nearly half a century), and Bebe Barron recalls how the composers’ guild successfully lobbied to have her score for Forbidden Planet credited as “electronic tonalities.” 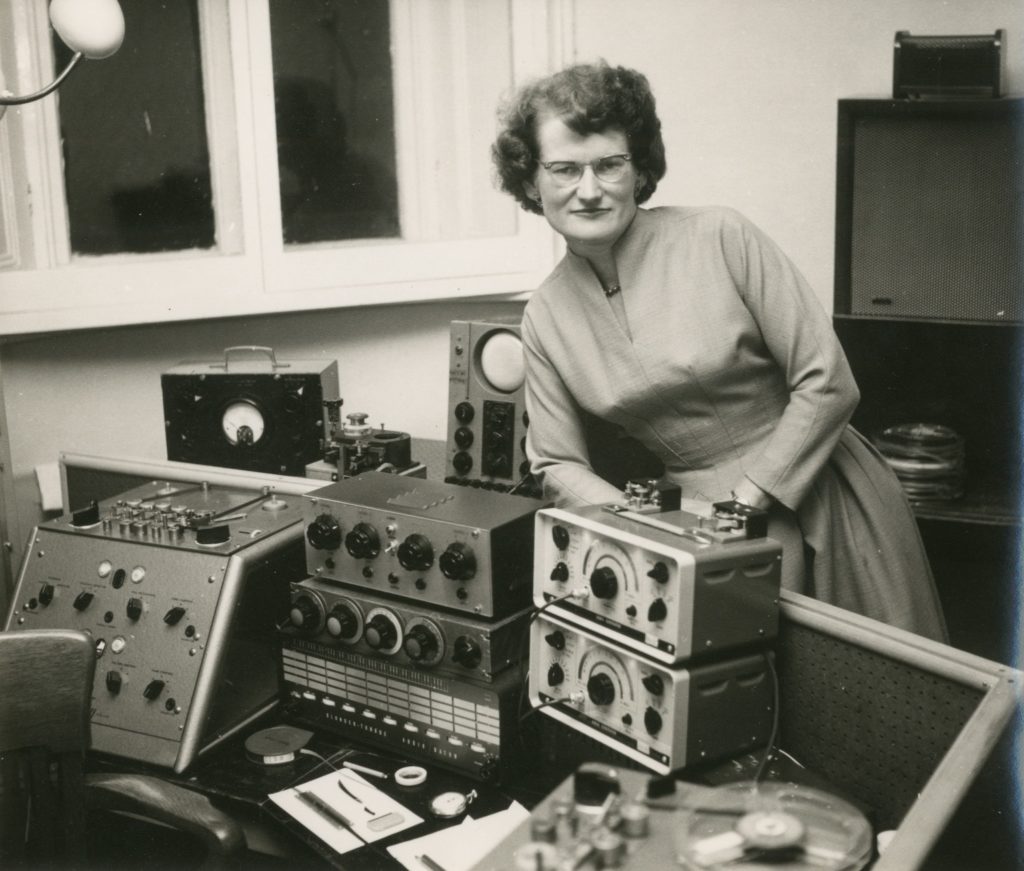 Daphne Oram, one of the subjects of SISTERS WITH TRANSISTORS. Photo courtesy of The Daphne Oram Trust and Metrograph Pictures.

It is music, of course, and while modern ears are perhaps more trained to hear it than the musical establishment of the time, it still sounds shockingly fresh today. One of the most interesting thing about the documentary is that, while these composers come from radically different backgrounds and each utilize their own unique methodology, their music sounds surprisingly of a piece. Rovner makes the inspired choice to weave the music into a continuous soundscape: we hear the music of each composer underscore their words and stories, then segue seamlessly into the next. In doing so, our ears are drawn to the common themes: the sweeping echoes, the swirling tones, the disregard for– yet clear understanding of– convention. The result is dizzying, and undeniably more alive than any number of more heralded works from the era. As Gordon says of MIT professor-turned-sonic manipulator Maryanne Amacher, “She didn’t want to just push around dead white men’s notes.”

One notable exception to this truism, of course, is perhaps the most “famous” name on display: Wendy Carlos, the pioneering mastermind behind the platinum-selling, Grammy-winning phenomenon Switched-On Bach. Curiously, despite her colossal standing in the field, Carlos’ screen time is limited to a single French newsreel clip. This is perhaps a function of the fact that her story is so big as to potentially overshadow her peers– a trans woman who publicly transitioned at the peak of an already game-changing recording career– or perhaps because Rovner assumes that anyone drawn to this documentary is already familiar with her work.

By the same token, it’s worth noting that those familiar with the subject matter will likely have seen at least some of this footage before. Indeed, several of the artists on display have already been subject to the feature documentary treatment: Rockmore in Theremin: An Electronic Odyssey, Ciani in BUFF alum A Life in Waves, Derbyshire just this year in The Myths and Legendary Tapes. But it’s unlikely that even the most devoted knob-twiddler has seen everything here, and there are some true gems (I was particularly floored by footage of Oram at work painting notation onto glass slides to be fed into her synthesizer). More to the point, the average person on the street probably isn’t a music-obsessive weirdo, and most of these women aren’t household names– as much as they should be. If just one person walks away with a newfound knowledge and appreciation of these innovators, Rovner’s film will have done its job– and I suspect those viewers will number well more than one.

That so many women found success in electronic music perhaps speaks to the manner in which women in the arts are often relegated to the less-showy “women’s work” that can be done behind closed doors (in film, consider the number of prolific female editors spanning back to the medium’s dawn). The influence on the composers here is undeniable; the fact that so few outside of diehard record-collector circles know their names is inexcusable. For those with an interest in filling in the gaps in their knowledge– or just in finding some new musical avenues to explore– Sisters with Transistors is as perfect a place as any for one to begin their education.

Available for digital rental 4/24-5/6 via Metrograph