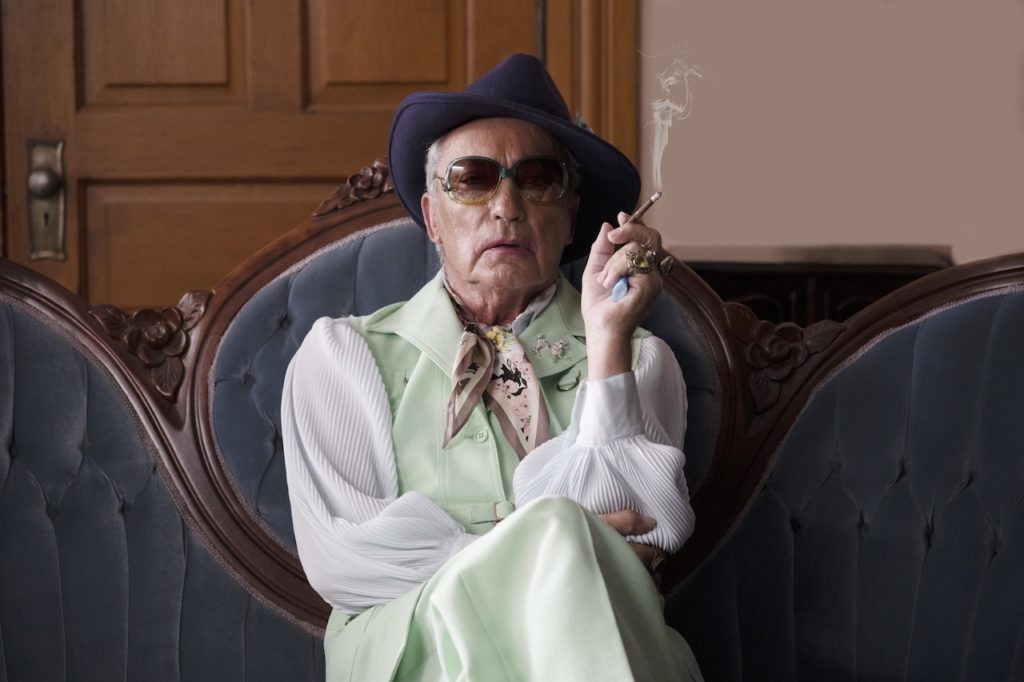 For those of you following along from the sidelines (which I have to imagine is most of you, given the… daunting price of a SXSW pass), I feel I should take a moment to explain a little about how this year’s fest is set up. Unlike most virtual festivals, which spread out their premieres and virtual screenings over the entire course of the event, SXSW is oddy frontloaded: the premieres span only the first three days of the five-day festival, with the remaining 48 hours dedicated to catching up on what you missed. As I mentioned in my first dispatch, I have thus far been following the festival in real time, watching movies in order at or around the time they go live, and making connections on the fly.

All of which is to say this: while I’ve managed thus far to retroactively come up with catchy “themes” for the offerings of the first two days, and I’ve programmed my own themed catch-up blocks for the last two, I can discern no rational common thread between the premieres I watched on Day Three. If, while reading this, you can extrapolate any sort of connective tissue and/or snappy title for today’s dispatch, email me through the site’s contact page and I will Venmo you a dollar.

Anyway. I actually started the final day of SXSW premieres by catching up with one of the previous night’s Midnighter offerings: Jakob’s Wife, the much-hyped new vampire splatter-comedy from director Travis Stevens (Girl on the Third Floor). Beloved scream queen Barbara Crampton stars as Anne Fedder, the taciturn wife of small-town minister Jakob (a shockingly clean-cut Larry Fessenden!). Anne and Jakob’s marriage isn’t awful, necessarily, but Anne is restless, with a nagging regret over giving up the dreams of her youth to be a seen-and-not-heard church mouse. One evening, following a business-and-possibly-more meeting with an old flame over a prospective development project, Anne is attacked by… something… that pops out of a musty crate full of rats and dirt. When she returns home, Anne is dazed, but (apart from a couple of holes in her neck), she feels surprisingly good, more confident and outspoken than she’s been since high school. Unfortunately, she also finds herself with a craving for blood and an aversion to ultraviolet rays. Sensing that something is amiss with the missus, Jakob must figure out how to save his wife– in more ways than one.

Despite the gallons of the red stuff and loving closeups of oozing prosthetics, Jakob’s Wife is, above all, a comfortable movie, at least to an old Fango-hound like me. Crampton and Fessenden are both familiar faces who have each appeared in more than their share of much-loved horror classics, but neither often gets a chance to play characters as fully fleshed out (so to speak) than they are given here. The result is a pair of characters unusual in the genre– middle-aged, comfortable with each other, given space for their own personal hopes and dreams– and both actors clearly relish the opportunity (I’d pay to see them in a grindhouse remake of The Thin Man). As for the movie itself, it’s a fun, just-slightly-smarter-than-average bloodbath pitched somewhere between Salem’s Lot and The Lost Boys. It gave me exactly what I went in for, and for that, it made me smile. 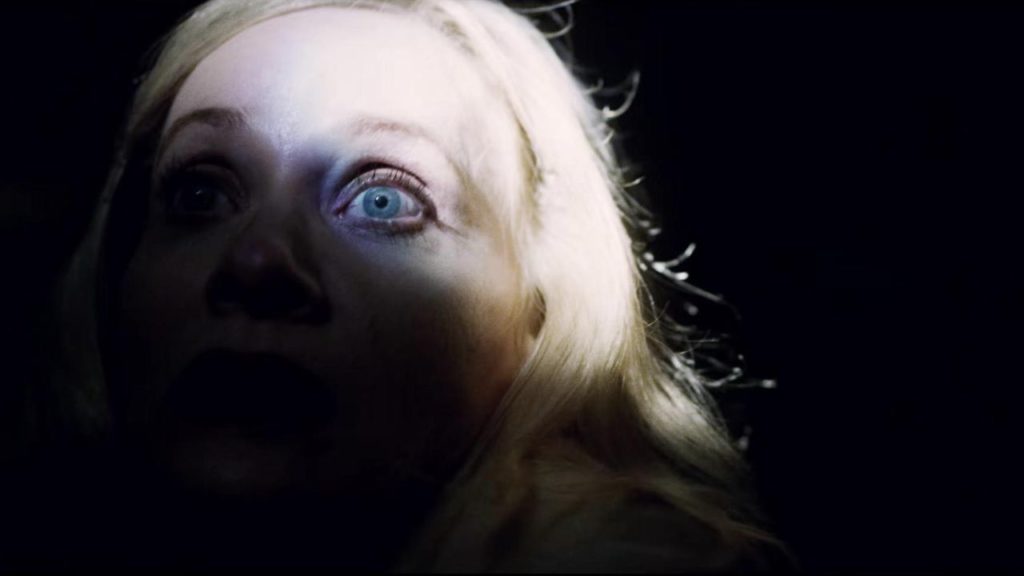 The next film, on the other hand, gave me much more than I bargained for. I was excited for Swan Song from the moment I read the logline: an aging hairdresser (played by Udo Kier!) escapes from his nursing home and sets off on an odyssey through middle-America to beautify a wealthy socialite’s corpse for her funeral. On paper, it sounds like pure black comedy– and, to be sure, it mines a lot of laughs from the reptilian, wildly Teutonic Kier playing a flamboyant beautician trying to communicate with small-town Ohio rubes. I was expecting to cackle, and I did, but I most certainly did not expect to get choked up.

The secret is that, for all his campy excess, Keir’s “Mister Pat” is treated like a real person (which, per a memorial card at the end of the film, he was). As soon as he leaves the confines of his nursing home, Pat commands any room he enters with his imperious personality, eye-popping sense of fashion, and withering bon mots. But we quickly get hints that his outrageous humor masks real pain: a late partner, an ended friendship, a business shuttered following a personal betrayal. Even the town’s hole-in-the-wall gay club, where Mister Pat used to perform every Friday, is on the verge of being shuttered and converted into a trendy microbrewery. Kier (who seems to be on an improbable 2020s hot streak, following last year’s Bacurau) plays him with the unbearable sadness of a giant realizing that he’s outlived the world he was too big for, a forgotten legend who’s still capable of bending strangers to his will. It’s a remarkable, career-defining performance which I hope will be remembered by next year’s awards season, and a very special movie. 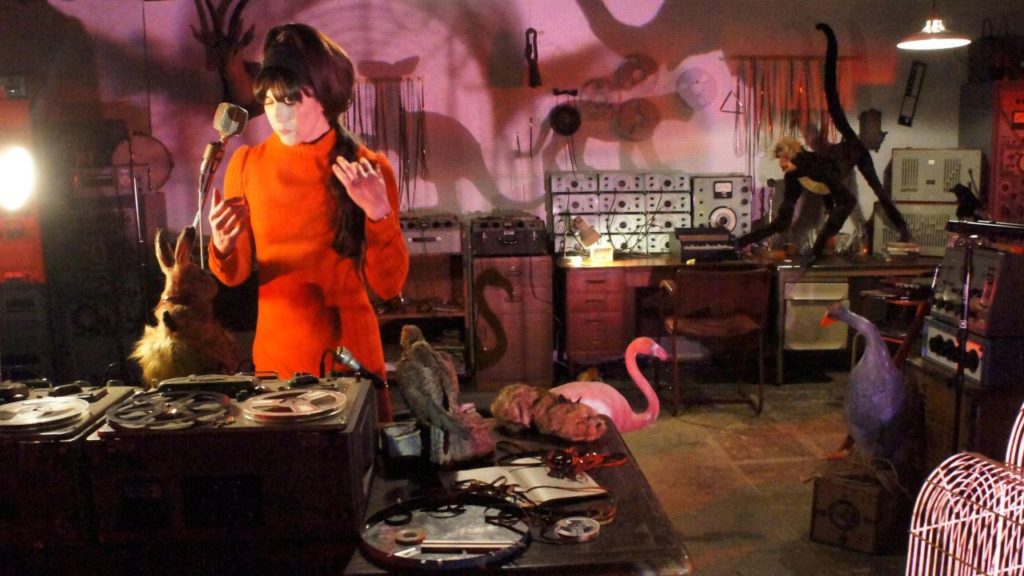 I was similarly unprepared for Delia Derbyshire: The Myths and the Legendary Tapes, though I was at least more familiar with the underlying story. Delia Derbyshire is a name spoken with hushed reverence in electronic and experimental music circles. Best known for her work with the BBC’s legendary Radiophonic Workshop (where she created the iconic theme song to Doctor Who, among many others), Derbyshire approached music with a mathematician’s brain, splicing and distorting snippets of tape into strange new configurations decades before the invention of samplers. But she was also a troubled soul, keeping erratic hours and frequently lapsing into depression and alcoholism, constantly searching for the outer reaches of what “sound” and “music” could possibly be.

True to Derbyshire’s cut-and-paste technique, director Caroline Catz has seemingly assembled several different movies into one. From moment to moment, Delia resembles a talking-head documentary, featuring interviews with Derbyshire’s surviving Radiophonic colleagues; a conventional biopic, with Catz herself playing Derbyshire in extended dramatic scenes; and a long-form music video, following Throbbing Gristle’s Cosey Fanni Tutti as she remixes and reassembles a lost treasure trove of Derbyshire’s tape experiments. The result is often disorienting (I’m not sure how much information I would have taken away if I didn’t go in with a working familiarity with the subject), but also mesmerizing. The through-line, as it should be, is Derbyshire’s uncanny music, at once familiar and utterly alien, and still astonishing more than a half-century later. This biopic likely won’t make a fraction of the box office of Bohemian Rhapsody, but it’s a much truer representation of what made its subject special. 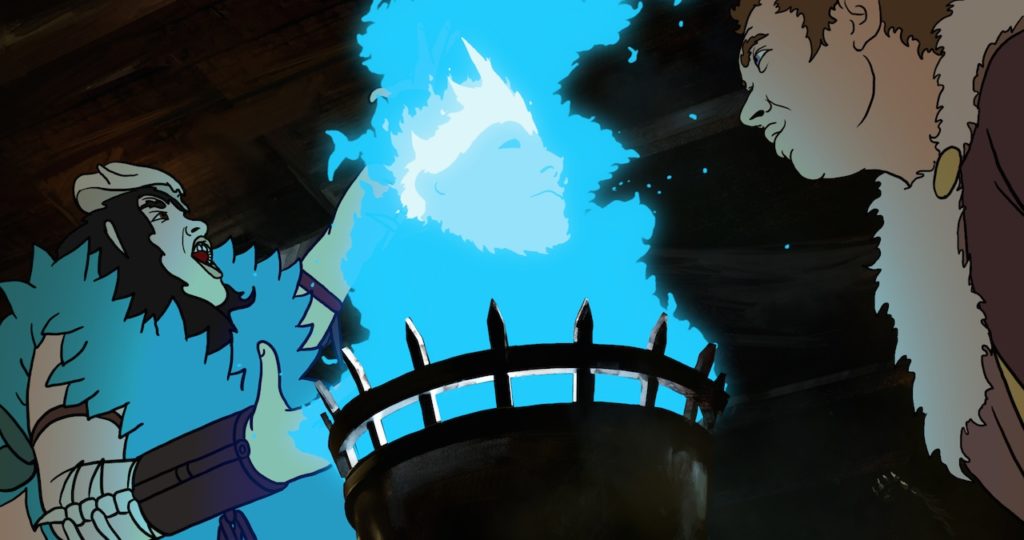 Finally, my midnighter selection for the evening was The Spine of Night, a deliriously psychedelic animated sword-and-sorcery epic. Animated in the eye-popping rotoscope style (in which live actors are traced over and embellished upon), Spine opens with a scantily-clad swamp priestess (voiced by Lucy Lawless) trudging up a snowy mountain to confer with the ancient, masked guardian of a magical blue flower (Richard E. Grant). Once she reaches his lair, she regales him of the cruel despot who is using the flower’s seeds to rule with an iron fist. The plot, from this point on, is mostly incident and high-fantasy nonsense; recounting it would be close to impossible, and also largely beside the point. The point, like such adult-oriented animated fantasies as Heavy Metal and Ralph Bakshi’s Wizards, is simply to be awesome. The Spine of Night walks a tricky line: it thankfully never lapses into irony (even Patton Oswalt, voicing a mad eunuch king, mostly plays it straight), but also never feels like it expects you to take its lore too seriously. From its vibrant, old-school animation to its surplus of spurting decapitations and casual nudity, it feels like a throwback to a simpler age of nerdery– an age of airbrushed vans and Dungeons and Dragons, when metalheads all read Tolkien and wore capes for their band photo shoots. Is there an emotional throughline? Not that I could detect, though it could be the case that I’m just not dorky enough. It’s still a hell of an achievement, and appointment viewing for the chemically enhanced.

Part of our ongoing coverage of the SXSW 2021 film festival– for previous dispatches, click here and here!