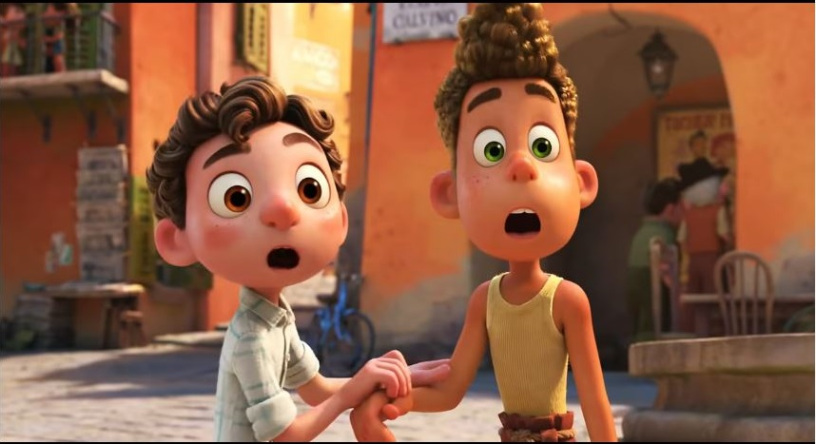 Disney is once again giving Pixar the short stick, sending its latest original effort Luca to Disney Plus instead of allowing its rightful theatrical release. If Raya and the Last Dragon and Cruella can do a theatrical/streaming hybrid, why can’t the story of two little sea monsters making friends in 1950s Italy? It’s hard to read these moves as anything besides disregard for original filmmaking. It’s unfair to Pixar animators and other employees after a decade of mostly sequels (even though Toy Story 4 is perfect). Though neither Onward nor Soul were among my favorite Pixar offerings, Luca is making a case to get into my top five, and I’ll have to make do with watching it on my television.

Our hero, the titular Luca (voiced by wunderkind Jacob Tremblay), is a shy sea monster living off the coast of Italy with his parents (Maya Rudolph and Jim Gaffigan). He spends his days herding his fish and avoiding humans. Much like Ariel over 30 years ago, he wants to understand life on the surface, but he’s too nervous. Fortunately, he meets an outgoing sea monster named Alberto (Jack Dylan Grazer) who quite literally pulls him out of his comfort zone. No Ursula needed: the sea creatures of Italy look like humans when they dry off. If they get wet, they turn back into fish. As you can imagine, this leads to plenty of hijinks, as the boys attempt to hide their identities from potentially dangerous humans.

The animation is gorgeous and stylized. The characters look like claymation figures in a Ghibli-inspired locale (the town is even called Porto Rosso, though most of the visual references seem more Kiki’s Delivery Service). Luca seems to exist beyond the Pixar house style for human characters who ebb in and out of the uncanny valley. They’re quite simply adorable. The sea monster designs are creative as well, though sparsely used as most of the film takes place on land. So often the spark we see in concept art is flattened, and thankfully Luca subverts that. The script is a lot of fun, though some might find the early gags a bit tedious before the boys journey to the human town.

Despite what the director or Disney might say, this is a deeply queer film. It can be hard to write about this without sounding like someone grasping for representation in a cultural landscape devoid of all but the straightest of stories, but Luca really is about a gay little kid trying to keep up with a cooler boy for reasons he might not entirely understand. The “sea monsters” get bullied, as does their human friend Giulia (Emma Berman), a little adventurer who talks like Peppermint Patty and dresses like a Little Rascal. It’s not hard to connect the dots here. As always, I like to avoid spoilers, but there’s one scene in particular that I cannot interpret as anything but gay self-preservation and betrayal in the face of violence. As always I’m probably reading too much into a Pixar movie, but why shouldn’t I?

Luca is the finest output from Pixar in years (again, besides Toy Story 4, but that’s a whole other thing), which makes its status as just another streaming offering that much sadder. Will people watch Luca? Will it have a cultural foothold, or will it just disappear after this weekend? It’s silly to worry about this sort of thing with a Disney movie, but when the rest of their slate is profoundly mediocre, it’s hard not to get annoyed. But hey, at least there are Luca Happy Meal toys!

Available to stream on Disney Plus on Friday, June 18