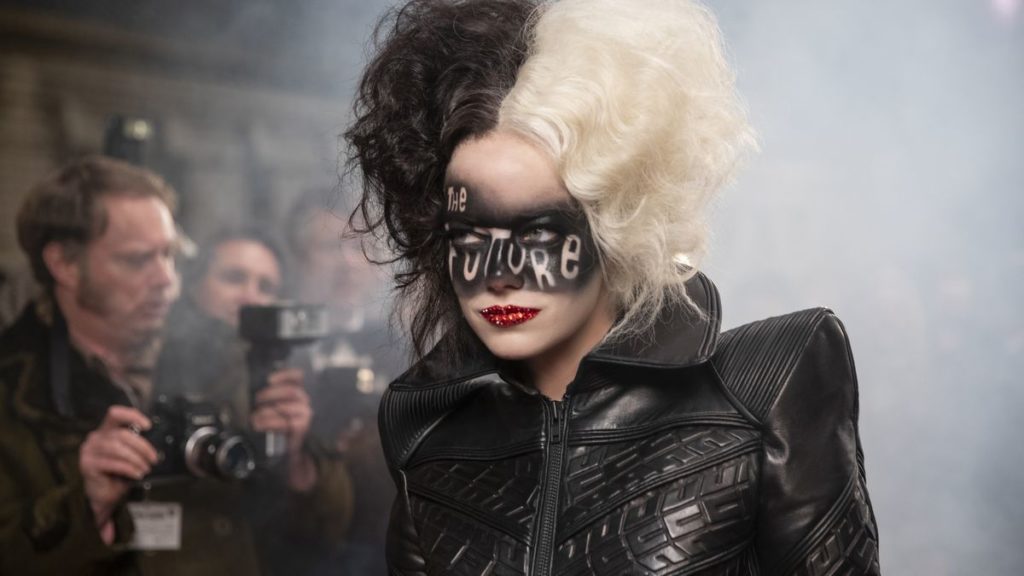 Cruella is an ostentatiously over-directed female-centric movie centering on two successful women in the 1970s London fashion scene rifle with popular tunes. Had it not been made by Disney and necessarily attached to pre-existing material, it would be the type of film hyped by the Academy. If “Oscar adjacent” earns clout with you, Cruella may be worth the steep rental price; if it doesn’t, skip it entirely.

In a live-action villain origin story, the symmetrically divided black and white hair of Cruella from One Hundred and One Dalmatians is held bewitchingly by Emma Stone in a manner akin to a Helena Bonham Carter in a Tim Burton movie, but with more pizazz. Orphaned as a child, Estella has a knack for all things fashion and finds herself two fellow orphaned friends. The three of them age into adulthood through conniving and thieving until her friends manage to get her foot in the door of the fashion world, where she meets the imposing Baroness (Emma Thompson). Well, we’re told they broach adulthood: Stone’s character is approximately 18 despite the fact Stone is approaching her mid-30s.

Craig Gillespie, the director behind I, Tonya and The Finest Hours, maximally directs the two hours and change with long-takes, creative but predictable focus pulls, complementary music, voice-over, and attention-grabbing production design, amongst other directorial choices. The music choices, and more specifically, performances, are a good example of Gillespie’s forceful influence. The score features several covers—such as “Feeling Good,” “Come Together,” and “Whole Lotta Love”—to render an artistic embodiment of Cruella/Estella’s dual identity.

Whether or not this intensely directed style works here, it’s a welcomed change from the recent corporate-productional feel of the most recent crop of Disney films like Call of the Wild and Mulan. The studio has even been willing to add or remove scenes to better reflect the political environment of the country of release—making their movies feel more like products aimed for mass consumption than art. Cruella at least feels more like art because of its overbearing style.

In one of the best shots of the film, a long oner dollies and tracks through the fashion studio Estella is hired by, starting with the fashion designers on the higher and more well-kept floors, and moving farther down the building and farther from the fashion itself until it settles on Estella cleaning a toilet. At first, the shot feels impressive simply for impressiveness’s sake, until the movement down the social ladder becomes more obvious.

While there may be more to Cruella than the prior Disney live-action remakes and prequels, it’s still a product of Disney, and that comes with certain baggage. It mostly skates around hard to stomach subject material. Workplace abuse, as often shown in high fashion films, is played more for jokes than anything of importance; the abuse stems from the Baroness viewing people as replaceable parts in the machine of her business, but since the animal skinning of the prior films is thrown off a cliff—totally negligible—in this iteration, her abuse is more palatable.

More noticeably, major institutions (such as, say, a major player in the entertainment and technology industry) don’t produce bad people, other bad people do. Estella, and eventually Cruella, is a bad egg because of the harm inflicted upon her by the Baroness. It’s the narrative of the American Dream in reverse; of course, a major motion picture company and streaming provider would look favorably upon this story about the origins of evil: after all, structural problems require structural change, which powerful institutions may approach with restraint.