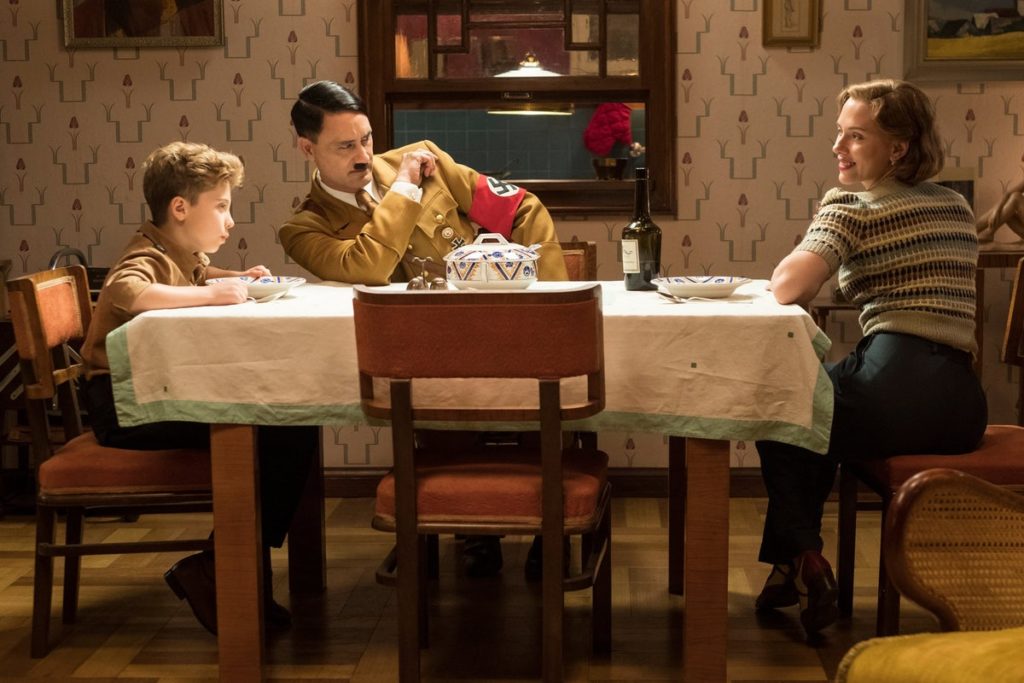 Taika Waititi is one of the most exciting directors working today. His films range from the charming coming-of-age tale Boy, the hidden comic world of vampires in What We Do in the Shadows, to the furthest reaches of the Marvel universe in Thor: Ragnarok. The man has style that cannot be controlled. In Jojo Rabbit, Waititi’s comic sensibility is put to the test as he takes on Adolf Hitler, the Nazis, and what fanatical belief can do to a person. Unfortunately, the film stops short of delivering a real message about hatred, coming close but failing to stick the ever-important landing. Jojo Rabbit is an absurd experience where Waititi’s enthusiasm isn’t enough to cover for the thin plot, but it certainly tries.

Jojo Betzler (Roman Griffin Davis), a young German boy, is a fanatical supporter of Adolf Hitler who lives with his single mother, Rosie (Scarlett Johansson). Not only does he wholeheartedly believe in the Nazi cause, his best friend is Hitler– or at least, an imaginary Hitler played by Waititi himself. Waititi as Hitler has understandably been the focus of the film’s marketing, but he has less screentime than you may expect. The character mostly exists for Jojo to have someone to talk to, and only in his last scene do you understand what exactly he’s going for. It’s a gimmick that comes apart quickly.

After an explosive accident at Hitler Youth camp, a sequence that feels like an extended homage to Moonrise Kingdom, Jojo finds himself at home recuperating alone– or so he believes. Soon enough, he discovers a Jewish girl named Elsa (Thomasin MacKenzie) his mother has been hiding in their walls. Naturally, Jojo is terrified and wants to report Elsa to the Nazis, but living in the dark hasn’t dulled Elsa’s threatening words. Though their relationship is tense, Jojo and Elsa begin to bond as the world around them grows increasingly dark and unsafe, especially for the Germans.

Both Davis and MacKenzie are fantastic actors. MacKenzie harnesses the rage only hinted at in her breakout performance in Debra Granik’s Leave No Trace, using her words to cut like a knife. Davis sells the film’s saddest moment, but he cannot save the third act, which never lives up to this scene’s promise.

The adult actors all seem to have different ideas about what this movie is. Perhaps this was meant to show how scattered the Nazis were at the end of the war, but it leads to some jarring tonal shifts. Sam Rockwell continues his years-long run of playing racists (spare a Bob Fosse here and there), once again displaying a character’s unearned heart of gold. Rebel Wilson and Alfie Allen play Nazis who work in his office but ultimately don’t have much to do; Allen in particular only has a few lines. Johansson is the only adult who really digs into the inherent sadness of the film, imbuing her role with a real sense of warmth and exhaustion as she watches her son get brainwashed by the Nazi regime.

I want films like Jojo Rabbit to keep getting made. Waititi takes a lot of swings, and while they don’t all work, at least he’s taking them. WWII and Nazi satires have always existed, and they should continue to be made. In a world where people and corporations are seemingly afraid to condemn Nazis, it’s nice that there exists a film where a child kicks Hitler out a window while saying “Fuck you, Hitler.”