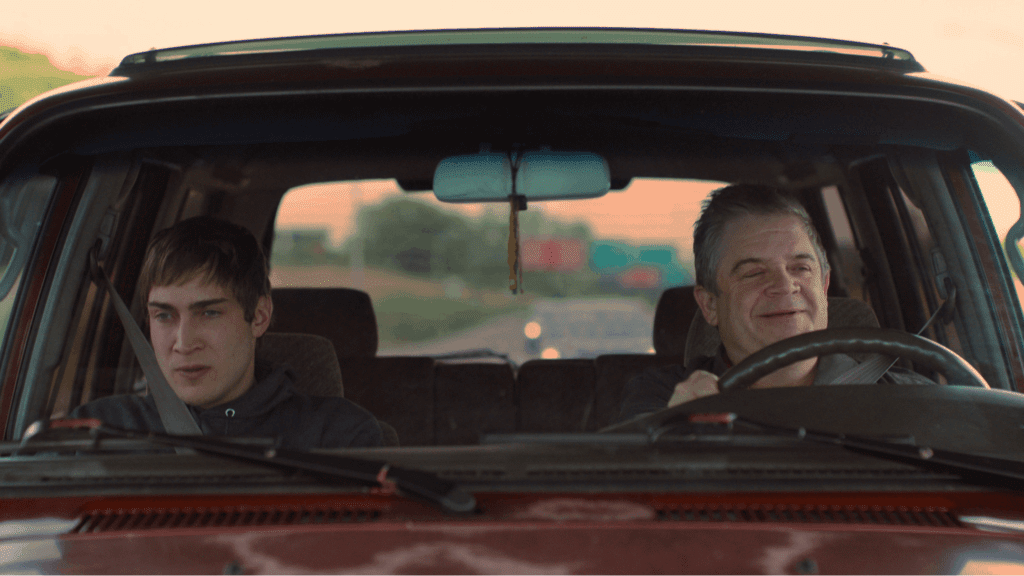 Catfishing is not my favorite plot scheme. Part of the reason is that it feels like an outdated act, one that feels like it should have died out when the landscape of social media and digital literacy evolved into different platforms, multi-factor verification codes, and other concerns (such as emotional scammers). There is a possibility that I could be out of tune with what’s actually happening (after all, Catfish: The TV Show is still technically running), but at the very least, I think we now carry a mental handbook of security steps we’d follow to ensure that the person on the other side of the screen is real.

However, that mental handbook was in its early draft stage when social media platforms began to flourish. I Love My Dad, written by Boston-based James Morosini, brings us back to the friend counts and photo albums on Facebook. Patton Oswalt stars as Chuck, a father who tries to contact his son Franklin (Morosini) after Franklin’s suicide attempt. Though it’s not initially clear why, Franklin blocks Chuck on Facebook and proudly shares the news at his support group. Desperate, Chuck creates an online profile of a girl named Becca (named after a waitress he meets at a diner, played by Claudia Sulewski) and befriends Franklin. After passing Frankin’s own security handbook (“Why am I your only friend?” he asks “Becca” in a chat), Chuck’s flabbergasted reactions and fatherly confusion throughout this farce comedically mitigate the otherwise anticipated nail in the coffin between him and his son.

“That is incest!” Chuck’s co-worker Jimmy (Lil Rey Howery) exclaims when Chuck confides to him about the unfolding complications. Indeed, Morosini leans into the craziness of the situation, especially when Franklin reluctantly asks Chuck for a ride to meet Becca in person.  Based on Morosini’s personal experience with his father, comedy in this form can be cathartic, especially when details are exaggerated for effect. The online conversations between Franklin and “Becca” come to life as imagined in-person conversations through Franklin’s perspective, but at times, when Chuck plays out their conversations, we see him and Franklin sharing intimate moments that serve as slapstick comedy (and yes, in some ways there is a space for this to be classified as incest; if a trigger warning is warranted, Chuck/”Becca” has cybersex with Franklin by borrowing a sexual conversation from Chuck’s girlfriend, making for a foursome with iffy consent boundaries).

We learn that Franklin keeps a distance from Chuck due to his father’s compulsive lying behavior. In the opening sequence, Chuck allows a young Franklin to take a dog home, ripping down a flyer that indicates that an owner is looking for that exact dog. Franklin shares his hesitation with “Becca,” which opens another portal of emotional manipulation when Chuck uses “Becca” to justify his actions. The components of I Love My Dad are complicated and disastrous, but Morosini does well to approach the fourth wall without breaking it, acknowledging that in light of the high levels of discomfort, we can still laugh about it. Oswalt, who exudes Well-Intended Dad Energy and buffoonish guile, might remind us of Robin Williams in World’s Greatest Dad, another film where the father also has to keep a game of charades to protect his son.

The other issue I have with the portrayal of catfishing is that it usually stems from a type of selfishness. No good comes from lying, so we stick with the anti-hero and anticipate an unhappy ending. But while World’s Greatest Dad is seeded in self-serving acts by bad people, we come to believe that Chuck is trying his best. In turn, the ride to that ending is enjoyable in the way that your favorite song is playing on the radio but you’re riding shotgun in a clown car, which speaks to Morosini’s storytelling strength. Even more, if we think we can see the ending in the horizon, Morosini plays one last trick. It’s small, but it makes the catfish scheme worth it.