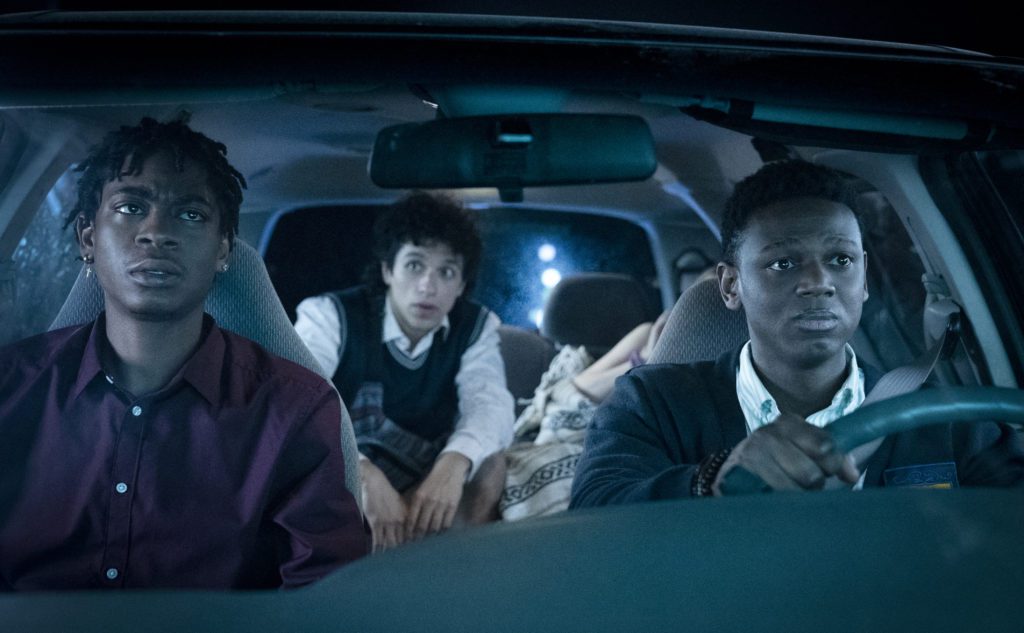 This is the year of friendship films. I’m not quite talking about the Top Gun-type wolf pack; the intimacy of trash-talking and trauma bonding feels just a little more tangible than romantic comedies. In the slew of buddy comedies coming out this year, Emergency might have taken the sharpest turn into the drama lane.

Sean (RJ Cyler) and Kunle (Donald Elise Watkins) are college seniors pre-gaming for the final stretch of the semester. For Sean, it’s completing the “Legendary Tour” — attending seven parties in one night and making it onto the college’s Black Firsts Hall of Fame. For Kunle, it’s finishing up his Petri-dish-centered thesis, which is what his admission to Princeton hinges upon (and of course establishes as a hurdle in the film). They arrive at the film’s focal conflict when they return to their house before the Tour and find an unknown girl passed out in their living room, despite their dorky roommate Carlos (Sebastian Chacon) occupying the room next door without having a clue.

As young men of color, they decide not to call the cops and try to devise different strategies where they can bring her to safe arms without revealing their involvement. On the flip side, Maddy (Sabrina Carpenter) is frantically looking for her younger sister that she had reluctantly brought to a fraternity party. Pressure rapidly encloses on our guys, and suffice to say, they do not perform great under pressure.

After being such a vital part of enjoyment in the newest reboot of Power Rangers (which I’ve decided I can recommend to people with sincerity), Cyler has always been a treat to watch on screen. In Emergency, he’s able to provide the dual role of easy-going, free-flowing (and not just the stashed-alcohol-in-juice-bottles kind of flow) college student and the acute back-straightening awareness of his identity of a Black man in this scenario. His character frequently challenges Kunle’s black-and-white model of the world: Sean wants to dump and ditch the girl, while Kunle believes that people will understand the situation right away. The friction between them is invoked by the topic of Blackness; in this case, their childhoods and way of experiencing the world shaped how they approach this situation (Kunle’s parents are both doctors; Sean’s brother, who is under parole, certainly did not crack a smile when they brought the girl over to his house for help).

From a tonal perspective, my central issue with the film is that it doesn’t seem to give into the challenge of balancing comedy (which was so prevalent in the beginning) and seriousness (which takes over after the laughs have settled). In the highest expectations, they should be able to blend within each other. However, the shift is somewhat jarring, leaving a bizarre feeling when the movie gets real. I feel almost embarrassed that I emitted a laugh in the beginning of the film when the British professor boldly using the N-word to, you know, make that point.

Stemming from a 2018 short film, it’s not surprising that the film loses elasticity when stretched out. Writer K.D. Davila, who previously wrote the Oscar-nominated tongue-in-cheek exploration of the industrial prison complex Please Hold, can’t seem to keep up with the pacing. Her pieces’ functionalities in sharing social issues are an admirable effort. Emergency is able to surpass this year’s Master in terms of delivering the message, but a flaw that I can’t shake off is the seeming lack of female perspective. While there is a specific racial dynamic of men of color and white female victims tailored to this story, the lens becomes myopic when we see how much effort men will go through to hide something that understandably strikes fear in women. We are lucky to be able to trust our protagonists’ intentions without question (“So you think it’s a good idea to dump a passed out girl in front of a frat house?”) and perhaps the missing intersectionality might be moot in its overall message.

At the end of the day, our fight-or-flight responses are affected by more than solely innate biology. There is a despondence within the meticulous planning and panicked actions that not everyone will undergo. Heck, if you think there was an easy solution to their problem, then you might need this movie.