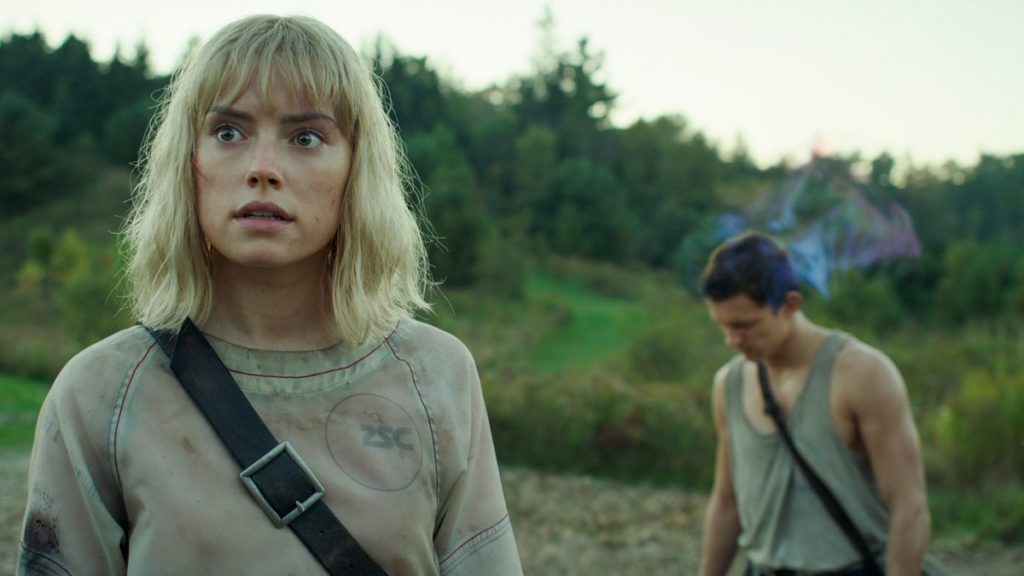 A disastrous YA adaptation debuting in early spring? Maybe things are going back to normal sooner than I expected!

From the film’s inscrutable opening epigraph to its standard sequel-bait non-ending, Chaos Walking is a total misfire, attempting to cash in on Hunger Games fervor almost a decade too late. Filmed in 2017, with reshoots only happening two years later, this adaptation of Patrick Ness’ novel The Knife of Never Letting Go should have stayed on the shelf and become a tale lost to time. Tom Holland and Daisy Ridley are adrift in the woods with one of the most annoying narrative devices in recent cinematic history: thoughts loudly screaming from the heads of the characters.

Holland plays Todd, a teenager living on a planet known as New World in a village of only men. He has been led to believe that women died out long ago (how long? The timeline is fuzzy. Kind of like The Village, but stupider), and that the men survived only to become afflicted with the Noise. The Noise, as stated above, are thoughts emanating from Todd’s head that he cannot control. Some have better control than others, like the domineering mayor of Prentiss Town, played by Mads Mikkelsen swaddled in furs like Warren Beatty in McCabe & Mrs. Miller. The fact that Mikkelsen doesn’t fully embarrass himself in this film is a testament to his strength as an actor.

One day, Todd witnesses a spaceship fall from the sky, leading him to meet a girl for the very first time. Viola (Daisy Ridley) was born in space and has no Noise, even when she awakens on this planet. The mayor and a preacher (David Oyelowo, who should be paid damages) immediately view the girl as a threat, and the chase is on.

What follows is mostly a chase through the forests of Montreal, as line after line of exposition builds out this lackluster world with no real answers. Also, did I mention the Noise thing is extremely annoying? Experienced Noise users (as if this is Jojo’s Bizarre Adventure) can create illusions with their minds – Todd scares Nick Jonas with a snake and projects an image of himself to trick his pursuers – but it doesn’t make up for the fact that hearing a constant stream of Tom Holland’s voiceover is awful. Didn’t they realize this would not translate well from the novel? Also, Nick Jonas disappears from the back of the film, a likely victim of the substantial cuts.

It should also be noted that, in the time since this film wrapped, Doug Liman has already directed and released another film, Locked Down, which was filmed during the pandemic. I don’t have much to say about that other than that, if you directed The Bourne Identity, I guess you don’t end up in director jail.

As a pale shadow of the days of the YA blockbuster, Chaos Walking serves as a warning to give the concept a break. Like the Divergent series before it, which NEVER GOT A FINAL FILM, it’s further proof that audiences don’t just want book adaptations – they want adaptations of books they already like. Or perhaps Lionsgate will release some Hunger Games prequels. Probably that.

In theaters Friday 3/5, but obviously don’t see it. You don’t miss theaters THIS badly.