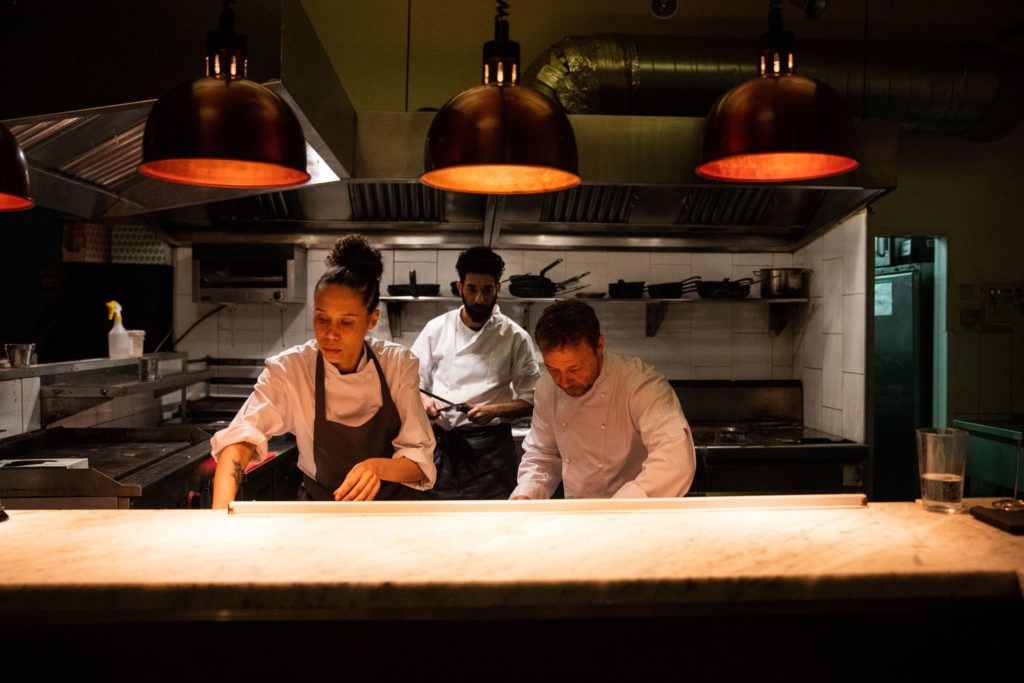 There might be two types of people in the world: people who have worked in the service industry and those who are poor tippers. Time spent as a fast food worker, bottom-level sales agent, or call center representative generally don’t make it as the central conflict. Beside the one-offs like Support the Girls, the minimum-wage occupation tends to be an additive to a person’s overall attempts in making it through the day. In Philip Barantini’s Boiling Point, which is a continuous shot of a London restaurant readying for a busy dinner night, the urgency in making service go smoothly is perfectly tendered with the sober nature of how people actually work together, garnished with personal diminishments. Eternals teamwork? It’s all about flipping out on a co-worker in front of everyone and asking them to go out for a drink afterwards.

Sous chef Andy (Stephen Graham) opens the show, arriving to work at his restaurant Jones & Sons (fictional ownership, real place). He is certainly not in the best spirits before entering the door, and not much better after he sees a health inspector ticking off his crew’s misdoings. Though he initially comes off as ostentatiously obnoxious, the health inspector sits down with Andy to run down the list of the restaurant’s operational flaws. An interesting trick happens (and will happen again throughout the film): Andy, suckling his white bottle and darting his eyes around, looks exasperatedly infantile and doesn’t look like he cares to listen to adult-on-adult scolding. We almost lean towards sympathizing with the health inspector, even if we naturally feel like we should be siding with the crew. Once the health inspector leaves, Andy goes onto a full-blown tirade, which comes out as a reiteration of the health inspector’s details with a Gordon Ramsey spittle. Service begins.

As quick as a knife chop or wine glass clink, Boiling Point dexterously showcases the multi-level dynamics of the workplace. While The Assistant trails the keystrokes and after-office-hours affairs through the meek observations of Julia Garner’s character, this film’s smooth transitions from distressed chef to belittled waitress to the kept-up hostess gives value to each role in an hierarchy that is obvious to those inside it. Think of the shadowing tension in Shiva Baby, but instead of settling our issues in the foyer or bathroom, Boiling Point lets us snake into the kitchen area, in front of the bar, between diners’ tables, and back to the stove as if we’re the ones running around.

It’s not surprising that tense moments amount to explosions, but Barantini makes it feel like the stress is a sort of respiratory virus that contaminates the relationship between mentor and chef, overworked dishwasher and late-to-shift dishwasher, or FOH and BOH. No one is particularly the bad guy, and it’s amusing to see how familiar the members of this environment are to us: the guy who feels like he’s above it all (see line cook Freeman, played by Ray Panthaki), the flaky youths (take your pick of waitress Robyn or dishwasher Jake), and the endearing older figure that everyone is kind to (of course it’s the pastry chef, played by Hannah Walters). This doesn’t even include the other characters that engage in this ecosystem, such as the television food critic or the trio of bro-influencers who try to order steak and chips off-menu. These peripheral roles sometimes come more into the spotlight as the camera skillfully bounces between employees’ perspectives, never allowing the night to drop an inch into boredom.

Yet, all ominous arrows point back to Andy, whose substance abuse and hot-cold nature creates an unspoken fissure between him and his crew. But because mostly everyone else is enjoyable on their own, his character doesn’t feel as omnipresent as it could, which allows all these issues to be more digestible. I took particular joy that this was filmed in the restaurant setting, but this should be relatable for anyone who has scoured for the dredges of self-worth after drowning in professional courtesies and bequeathing to the higher-tier tie powers that be. Though the film’s ending may have showed that some plot devices were too hot to handle, there is no doubt that Boiling Point is this year’s tart delight in frantic disguise.