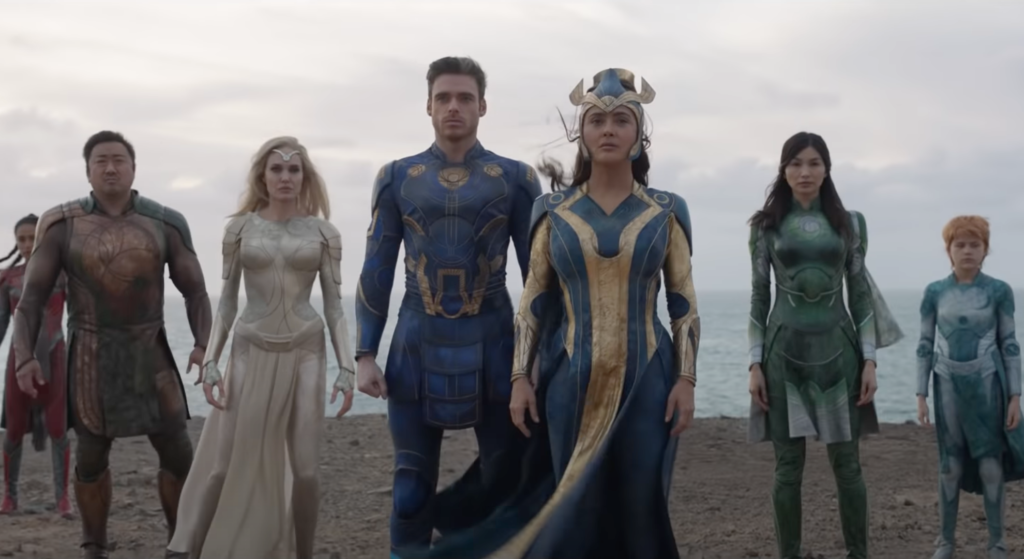 Eternals begins with an opening crawl explaining the various made-up words you’ll need to know to understand the story. The ETERNALS are warriors from the planet OLYMPIA, chosen by the CELESTIALS, led by ARISHEM, to fight the DEVIANTS who threaten life across the universe. According to this film, the 26th in the Marvel Cinematic Universe, Eternals are the only reason human beings have been able to develop civilization. About 45 minutes into the film, this crawl is revealed to be a lie.

Starring Richard Madden, Gemma Chan, Angelina Jolie, and many other great actors underserved by this script, Eternals certainly tries to justify its epic scope and narrative, but comes up short in pretty much all aspects. The film runs over two and a half hours with many repetitive scenes (did we really need to reunite with the Eternals one by one? How many flashbacks actually added anything that couldn’t have just been two lines of dialogue?) that could have been chopped out. I can appreciate the intent – it’s definitely cool that there are some super-advanced robots running around the MCU now – but the characters don’t have much depth or any chemistry with each other. Jolie in particular is given such a nothing role it was shocking. That’s Angelina Jolie!!!

Sersei (Gemma Chan), has been living among humans since the Eternals vanquished the last Deviant about 500 years ago. While waiting for new orders from the Celestials, She is dating Dane Whitman (Kit Harrington), who is only here to set up his future role as the Black Knight in some movie down the line. Of course, as always. Sersei has only remained in contact with one other Eternal, Sprite (Lia McHugh), who appears to be a child but is 7000 years old like the rest of them. One night, a Deviant attacks! Sersei and Sprite are rescued by the Superman-esque Ikaris (Richard Madden), and the quest to reunite the Eternals and protect Earth begins.

I don’t need to go over the plot, but we do need to acknowledge the Hiroshima moment, which is shockingly tasteless for Disney, lately smoothing down any and all edges so as to not offend. While other flashbacks show the Eternals fighting in places like ancient Babylon or Tenochtitlan, one moment shows Phastos (Bryan Tyree Henry) and Ajax (Salma Hayek) mourning the people of Hiroshima after the United States dropped the atomic bomb. To clear things up a bit (I guess…), Phastos did not directly create the atomic bomb. He is just regretting ever aiding humanity’s technological development, getting them to this point. It’s still completely insane and shows that the people making the film consider this recent history in the same category as the ancient world. There are living survivors to this day!

I’d be here all day if I just listed everything I didn’t like. We don’t need that. I didn’t hate the film. I hated Kumail Nanjiani’s performance, but I also hated that his character is just written out of the climax for no real reason. Pretty rude to the guy when everyone else gets to fight! Like I said, there are moments that could have worked if they had any room to breathe. Sprite’s conflict – why am I the one stuck as a child? – could have stood on its own, but gets the backseat. The visuals are serviceable enough, besides some rubbery moments and a CGI troll voiced by Patton Oswalt who shows up during the credits. Eternals just needed stronger character work for our ostensible lead, Sersei, who spends most of the runtime fretting and reacting to the real MVP, Richard Madden, who manages to imbue the internal conflict of “should I let the Earth hatch like an egg” with real soul, despite this being something that has only ever happened to Steven Universe. I really don’t know how people will react to this one, but if it’s like the others they’ll all go and forget about it by next week. I certainly plan to. Also go watch Those Who Wish Me Dead for an actual Angelina Jolie role.