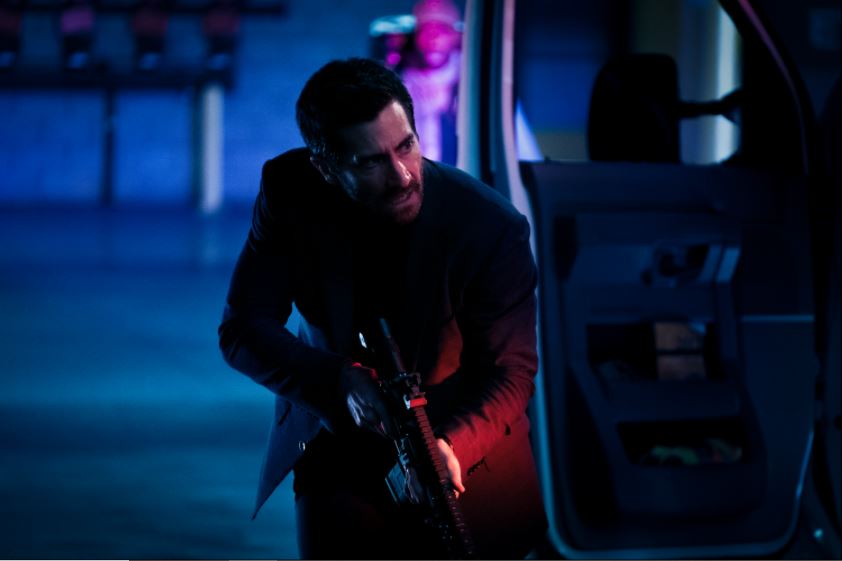 If you can somehow believe it, I didn’t know Ambulance was a Michael Bay movie until someone next to me joked about keeping an explosions count. The presence of two powerhouse actors in the modern era and a research-free interest for some fun in the sun had disguised the sucker punch I was about to repeatedly receive in the face for the next two hours. However, it was my first time watching a movie in a Dolby theater, so if there was a night to choose violence, it definitely should be the night I was going to spend in a room with tactile transducers and a distinguished shade of black that is unachievable in regular screens.

The Dolby guarantee for “pure” darkness might be useless in a Bay movie*, which flourish in orange skies (foreshadowing the inevitable pyrotechnics?) and sleek metals (foreshadowing the proverb that nothing lasts forever?). In Ambulance, Jake Gyllenhaal and Yahya Abdul-Mateen II are the Sharp brothers, who grew up in the family business of bank robberies. Will (Abdul-Mateen), who was adopted into the family, removed himself from criminal activity by enlisting into the Marines. But, in a tale as old as time, he is neglected by the government when he tries to navigate health insurance coverage for his wife’s chemotherapy. And in a movie with a sturdy Bay backbone, Danny (Gyllenhaal) reaches out to Will for one last bank job — the payday to beat all paydays.

In a fun way, Danny’s plan to steal $16 million goes awry. The LAPD is onto Danny from the get-go, his henchmen are shot to hell, and Will shoots an officer that was in a physical kerfuffle with Danny (the latter becomes a central crisis throughout the plot; officer homicide is underlined as the true unspeakable crime). The only sliver of escape: hijacking an ambulance occupied by a professionally disciplined/emotionally jaded EMT named Cam (Eiza González). The Sharp brothers take Cam and the injured officer as hostages (and supposed plot armor) in this two-hour car chase around the city.

What more is there to say? Ambulance borrows its plot from the 2005 Danish film of the same name, and it only seems right that Bay make it as Hollywood-loud as possible. Vehicles of any make and model are pawns in this game, and the streets of LA is the chessboard designed to lay waste to. At this point, there is a specific suspension of disbelief that occurs when someone decides to sacrifice the lives of many civilians and working professionals to catch two criminals. It’s not masculine-sexy to let them go and catch up with them later; we must follow the absurdity of twenty police cars getting absolutely wrecked trying to catch up to this ambulance. But it would be a fool’s wish to believe that there would be something as daring as considerate logic to a blockbuster like this, and I would not let Michael Bay fool me twice. 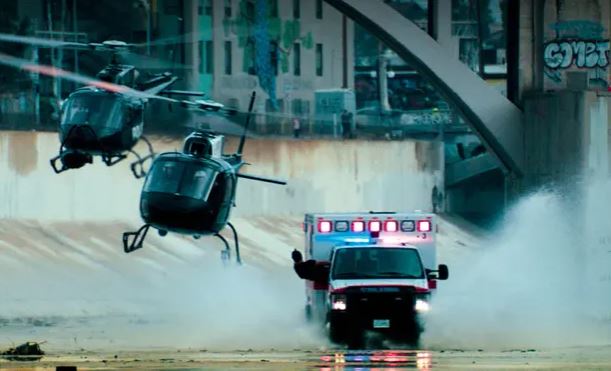 Actual still from the movie or a training video sequence for EMTs?

In the fairest assessment, there is not really a dull moment in Ambulance. Would I dare say that it combines the adrenaline rush of Speed with the intellectual cat-and-mouse tactics of Inside Man? Not really, but it’s almost fun to believe that Ambulance would have wanted to emulate that. During my visit to this Bay attraction, I contributed a string of muttered disbeliefs, two outright shouts, and a couple of disgusted head-turns (for the first time since I started my career in healthcare, I saw how someone in the 19-64 age group can become instantly eligible for the pneumococcal vaccine). There is something refreshing about having all these seconds-long reactions to a movie asking for little emotional investment, and for that, I was entertained.

Abdul-Mateen’s performance is overwhelmed by the good-man-in-a-bad-situation act, but he is a solid rock to hold onto in the whirlwind of Gyllenhaal, who has also chosen violence through this role. In the spectrum between Okja and Velvet Buzzsaw, Danny falls closer to the characters that need to punctuate their sentences by screaming and having a few of their conditioned brown locks fall out of place to exemplify the act of losing one’s shit. Somehow, this all fits the bill for the one-dimensional action characters that are still fun to watch.

I know what Michael Bay means to movies. I’m surer Michael Bay knows what Michael Bay means to movies. There is no dramatic amendment to the laws of film in Ambulance (though I have seen more camera drops than Robert Pattinson probably did in The Batman, which feels like a wronged act), but you know what? It’s not not good. In the year of 2022, it’s minimally offensive. Sometimes it emulates a sort of Be Kind to Frontline Workers Because They Take So Much Shit PSA, but you’re feeling particularly ACAB, there might be some notable choreographed moves to be enjoyed here and there. And to top it off: a character makes a reference to The Rock. Hate it or love it, Ambulance is here and will barrel down Sunset Boulevard regardless of the critics’ barricades.

*The amount of times I use Bay as an adjective in this review is both shameful and adequate.

Opens Friday, 4/8 in theaters everywhere (though, as always, the Hassle recommends the Capitol or your local independently-owned mutliplex)