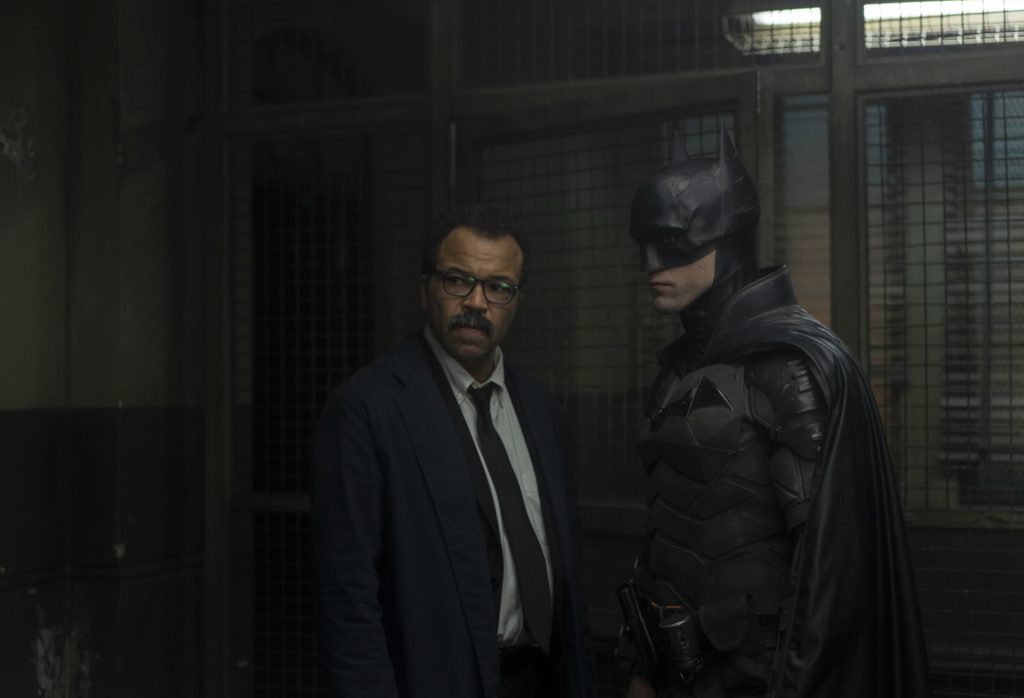 Even in this age of the Spandex-industrial complex, in which superhero films seemingly represent the only viable genre of cinema, Batman stands alone. The story of Bruce Wayne and his rogue’s gallery of colorful adversaries is both Hollywood’s longest running cape-and-tights series (for much of my childhood, it was the only active superhero franchise) and one of the most fruitful, with a handful of entries which only the stodgiest of critics can dismiss. Yet this remarkable hit-to-miss ratio raises a fundamental question: why bother making new ones?

It does, after all, seem unlikely that any filmmaker will make a better Batman movie than Christopher Nolan’s The Dark Knight, which used Gotham City as a sandbox for a truly operatic crime film. Likewise, it’s doubtful that any future installment will tap into the cultural zeitgeist as monolithically as Tim Burton’s 1989 original, which inspired everything from novelty haircuts to a chart-topping album by Prince. Nearly all of the Caped Crusader’s most iconic villains have been brought to the screen (give or take a Clayface or a Man-Bat), some multiple times; the Joker is currently one of only two characters in history to bring home Oscars for two different actors (the other is Vito Corleone). If Warner Brothers announced today that there would never be another Batman film, the series would stand as one for the ages.

Of course, they’re not going to make that announcement, at least not anytime soon. The current realities of the box office dictate that any successful franchise must be continued in perpetuity, lest its audience come dislodged from its ever-spewing teat. That there will always be a new Batman movie is a given; at this point, all we can hope for will be that its makers will find an interesting story in which to place him. Do we need The Batman, by my count at least the ninth film to feature the character in the past decade? Probably not. But the fact that director Matt Reeves has managed to spin a compelling and relevant story around the character anyway feels like something of a minor miracle. 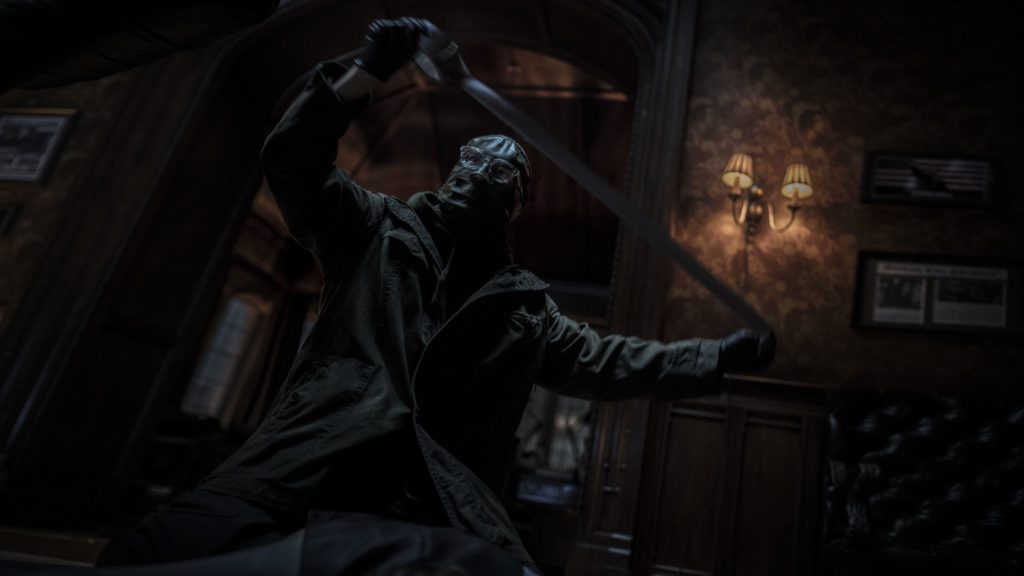 The Batman marks the franchise debut of Robert Pattinson, who plays Bruce Wayne as something of a reclusive, emo-kid Howard Hughes; his sole external contacts are sympathetic lawman James Gordon (Jeffrey Wright) and paternal butler Alfred (Andy Serkis*). His chief antagonist this time around is the Riddler (Paul Dano), here envisioned as a creeping serial killer in a Zodiac-style face mask. The Riddler attracts Batman’s attention by brutally and systematically doing away with Gotham’s elected officials, leaving sinister clues as calling cards and posting taunting videos on social media (yes, this film finds Batman facing his most terrifying villain yet: a Youtube video essayist). In hopes of decoding the Riddler’s motives, Batman plumbs the city’s underground, focusing on mob boss Carmine Falcone (John Turturro) and his right hand, Oswald “The Penguin” Cobblepot (Colin Farrell, unrecognizable under a fat suit and gobs of facial prosthetics). His hunt also leads him to cross paths with cat burglar/vigilante Selina Kyle (Zoe Kravitz), whose quest for justice is somewhat less scrupulous than his own. With the clock ticking and the body count rising, Batman must stop the Riddler and save Gotham– if, indeed, any of it is worth saving.

Though the running is tight, this is easily the darkest Batman movie yet (including the two with “Dark” literally in the title). It’s difficult to imagine this sunken-eyed and nearly subverbal Bruce Wayne doing much in the way of millionaire-playboying (would it surprise any Gothamite to learn of his secret identity?). This film preserves the hero’s no-guns policy (a thankful reprise from Zack Snyder’s version of the character), but he is so violent and animalistic that few criminals likely walk away from his beatings without severe brain damage. Seemingly everyone in this rain-drenched, dimly lit Gotham (except maybe Alfred) is either an obsessed vigilante, irredeemably corrupt, or criminally insane. Dano’s Riddler is frighteningly plausible, the worst-case-scenario of the incel Redditor turned viral terrorist (while there are moments where Dano perhaps goes a little too broad in his hooting madness, this is the best use of his cherubic-yet-slightly-off visage since There Will Be Blood). I’m old enough to recall the controversy when Burton’s cheerfully grotesque Batman Returns was used to sell Happy Meals; in comparison to The Batman, that film now looks as menacing as the old Adam West TV series.

Yet, while the version of Batman on display here is firmly in the Alan Moore/Frank Miller mode, there is one way in which the film refreshingly harkens back to the character’s origins. When Batman was first published in the 1930s, he was subtitled “The World’s Greatest Detective,” and had more in common with such pulp gumshoes as The Shadow and Philip Marlowe than with Superman or Captain America. Reeves seizes on this to create a Batman film which is as much a mystery as it is a superhero film. To be sure, there is no shortage of action, and obviously you can’t really make a “whodunnit” out of a film in which you know that the villain is the Riddler and that the Riddler is played by Paul Dano. But the most compelling scenes of the film are those of Batman and Gordon surveying crime scenes, searching for clues and puzzling over the villain’s taunts. The material here isn’t exactly Agatha Christie, but it’s refreshing to see a superhero film in which the characters take time to think the plot through– and in which the plot is worth thinking about. 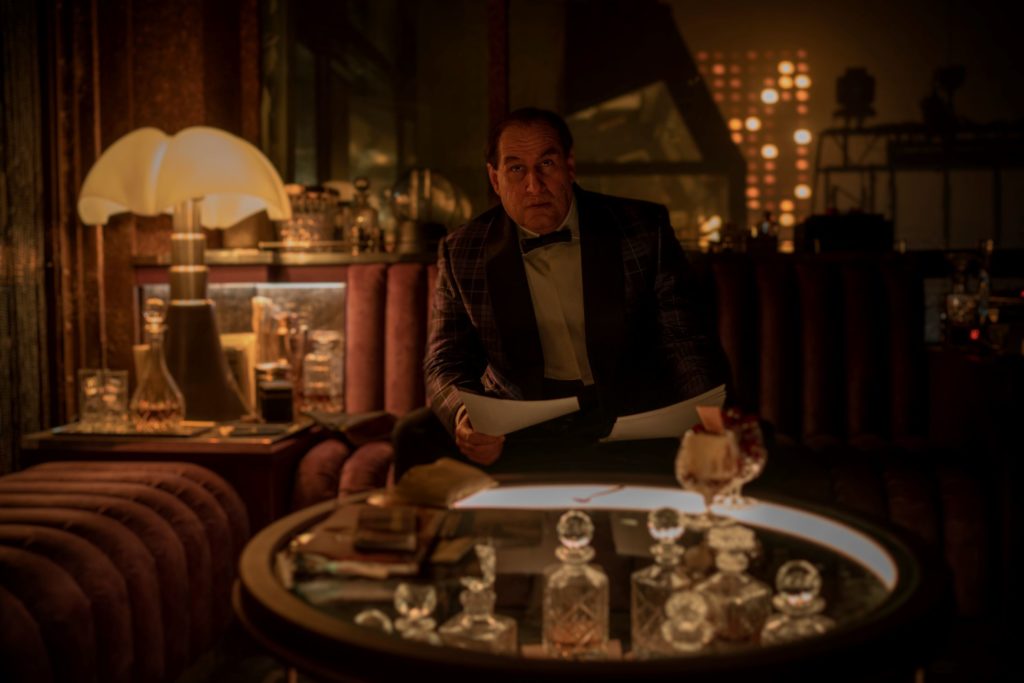 Of course, this is also a bit of a double-edged sword. At nearly three hours, The Batman suffers from some of the bloat which afflicts many contemporary superhero films, and there are a handful of threads which could probably be cleanly excised with little detriment to the whole (I’m thinking particularly of one plot cul-de-sac which once again relitigates the murders of Thomas and Martha Wayne, grinding the film to a halt right as it should be building steam). But for each of these scenes there is a moment of honest-to-god action movie thrills, including a fiery Batmobile chase for the ages and at least one truly chilling third-act reveal. Despite the ever-present grimness, there is a sense that this cast of venerable character actors is having fun with these overboiled noir archetypes, particularly Farrell, Turturro, and Wright (Pattinson, for his part, is fine; Batman isn’t a character that requires a whole lot of dramatic heavy lifting, and it’s probably safe to say the actor is mostly here to fund his next several arthouse passion projects). And Michael Giacchino’s score– a moody, two-note dirge played on apocalyptic pianos– gives us something it feels like we haven’t heard in years: a hummable, instantly recognizable superhero theme.

As anyone who keeps up with movies (and certainly anyone who makes them) knows, superhero movies don’t need to be “good”; they run on an engine of endlessly renewable brand loyalty, powered by crossovers and tantalizing post-credits sequences (the old “Same Bat-Channel” principle). At this point, a new reboot of a familiar hero feels as much like an exercise in copyright extension as anything else. So maybe it’s a case of lowered expectations, but I was quite pleasantly surprised with The Batman’s murky brand of neo-noir procedural. Reeves and co-writer Peter Craig took the time to spin a mystery yarn that would be compelling even if the detective wasn’t wearing a silly ear-hat, and to shoot it like an actual movie. Perhaps this is why the Batman series seems like such an outlier: the best may be behind it, but thanks to the bar set by Burton and Nolan, future directors at least feel the need to put in an effort.

* – In a sign of the times, Serkis marks the seventh Alfred Pennyworth to grace the screen in the past decade, following in the footsteps of Michael Caine, Jeremy Irons, Sean Pertwee, Jack Bannon, Douglas Hodge, and the voice of Ralph Fiennes.

Opens Friday, 3/4 @ Coolidge Corner Theatre and Somerville Theatre (and pretty much everywhere else)