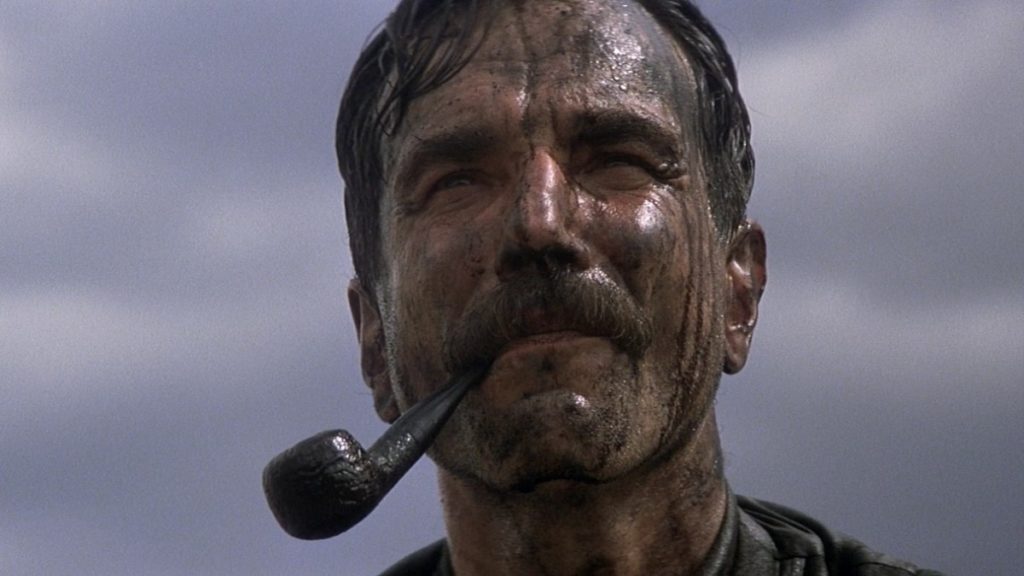 When I think of the towering perfection of Paul Thomas Anderson’s mid-career crowning achievement There Will Be Blood, I can’t help but think the first time I came across the film’s existence. My dad and I were watching SNL reruns and the sketch “Daniel Plainview’s I Drink Your Milkshake” was on. My dad found it hysterical, and he had the idea to show me There Will Be Blood later on that night. I had never seen anything like it. The sketch features Bill Hader as Plainview trying other people’s milkshakes for a new show on the Food Network, with Amy Poehler as young HW Plainview. Hader is so committed to giving his best Daniel Day-Lewis impression that the amount of intensity rivals Day-Lewis himself. Hader harasses the other customers (Will Forte and Kenan Thompson) before he is joined in by other now-iconic movie characters from the 2008 Oscar season (Fred Armisen as Anton Chigurh from No Country For Old Men and Tina Fey as Juno MacGuff from Juno)

It’s so fascinating to think about where this two-and-a-half-long, psychological western inspired by the likes of George Stevens and John Hutson stands in pop culture. Still being quoted fourteen years later, it is arguably the great American movie of the ’00s, showcasing Paul Thomas Anderson’s consistent strength as a writer/director to make movies about people and America simultaneously stuck in arrested development. Spirituality and family (codependency in the latter half of his career)– and sometimes the relationship between the two– permeate PTA’s career as well, giving him great reason to be inspired by Oil by Upton Sinclair. In Blood, Anderson finds a way to culminate all his themes explored so far in his filmography. We follow Daniel Day-Lewis as Daniel Plainview (in his second Oscar-winning turn and my favorite performance of all time), a silver-miner-turned-oilman on a ruthless quest for wealth during Southern California’s oil boom of the late 19th and early 20th centuries– all while sparring with the local preacher Eli Sunday (Paul Dano) for total control of a small California town.

To call this a story of good and evil, religion and capitalism, greed and innocence is an understatement. Neither the performances nor the movie are interested in understated storytelling (nearly impossible with a character as magnificent as Daniel Plainview), yet the bluntness never makes the movie ring hollow or derivative. Instead, it’s timeless and cautionary. The “I have a competition in me” speech he confesses to brother, Henry Plainview, confirms the need to eliminate emotion to fuel the power for control. It comes down to the ultimate sacrifice he has to make in losing his son, HW, to truly win the competition. But he is a fraud and so is Eli; this game they made between one another who can be better showmen ultimately costs them everything.

I’ve always loved what Roger Ebert had to say in his review in 2008: “Watching the movie is like viewing a natural disaster that you cannot turn away from. By that, I do not mean that the movie is bad, any more than it is good. It is a force beyond categories.” And a beyond categories film is rightfully apt way to describe the tone Paul Thomas Anderson sets. There Will Be Blood is sandwiched in between Punch Drunk Love and The Master, three very different films which somehow feel like they are all from one voice. PTA is idiosyncratic enough that he cannot be replicated, and has just the right amount of heart and humanity for accessibility. There Will Be Blood cemented him as the very best of his generation.