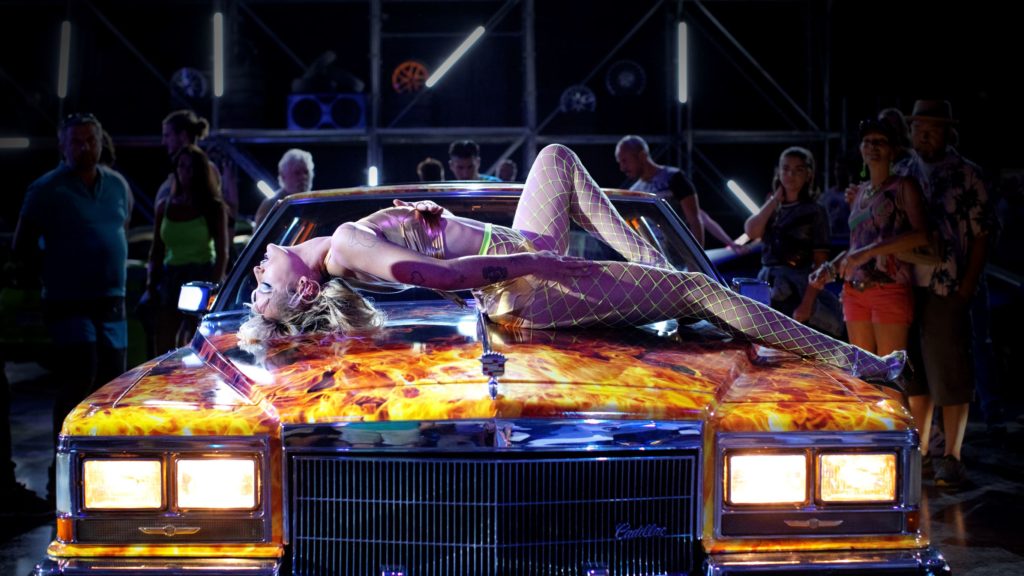 When Julia Ducornau’s Titane won the prestigious Palme d’Or at this year’s Cannes Film Festival, it set off a flurry of articles, largely sight unseen, about its Oscar prospects. On a surface level, this makes some amount of sense; last year’s winner, Parasite, did indeed go on to a historic run on the American awards circuit. Like Parasite, Titane is a bold and uncompromising work by a cultishly adored auteur of world cinema, and like Parasite it is likely to leave viewers either exhilarated or shocked. If it happened before, one might assume, why couldn’t it happen again?

As I walked out of the NYFF press screening of Titane, I found myself thinking back on these pieces and started laughing out loud. Make no mistake: Titane is as good as they say, and its plaudits on the festival circuit are richly deserved. There is also an exactly 0% chance that it will win over the same governing body that awarded Best Picture to Green Book.

Titane tells the story of Alexia, who was left by a childhood car crash with an impaired moral center, a sexual predilection for automobiles, and a nigh-indestructible titanium skull (though it is implied that she may have had the first two even before the accident). As a young woman (now played by Agathe Rousselle), Alexia makes a living grinding against hot rods in seedy clubs, while finding time in her off hours to casually murder her sexual conquests with a deadly 9” hairpin. When one murder snowballs into a spree via a series of blackly hilarious mishaps, Alexia goes on the lam, disguising herself as a boy and attempting to pass as a teenage runaway at the center of a media firestorm. What she doesn’t count on is the moral complexity of her new life with the boy’s father, a PTSD-wracked fire captain (played with wild intensity by Vincent Lindon). Oh, and did I mention that Alexia is seemingly pregnant following a sexual encounter with a car, with motor oil in place of normal discharge?

With its mix of extreme violence and auto-eroticism (so to speak), Titane will inevitably draw comparisons to David Cronenberg’s Crash. However, I found myself just as much reminded of such early Cronenberg works as Rabid or The Brood. Just as the Canadian body horror maestro does in those films, Ducornau takes a couple of premises which would be right at home in a straight-to-streaming b-movie– a woman is impregnated by a car, a serial killer infiltrates a grieving family– and raises them to such operatic extremes that they begin to look like something else entirely. Though both horrifying and artful, Titane escapes the trappings of both the horror movie and the arthouse. The result is something astounding and unclassifiable.

Make no mistake, Titane is strong stuff. Like Ducornau’s previous film, the coming-of-age cannibal film Raw, it owes a great deal to the so-called “New French Extremity” movement of transgressive, squirm-inducing thrillers. It should go without saying, but those constitutionally undisposed to violence in movies (and in particular self-harm) should probably sit this one out. The audience of critics at NYFF, who 24 hours earlier had sat calmly through a screening of Bad Luck Banging or Loony Porn, could periodically be heard to collectively wince, or gasp, or shift uncomfortably in their seats. Over the course of the film’s running time, Alexia does a lot of unpleasant stuff to the human body, her own and others’. If you don’t find something in Titane to put your teeth on edge, then I’m honestly not sure I want to run into you in a dark alley.

Yet, to me anyway, watching Titane never felt anything like a chore. For one thing, it is often really funny, albeit in the blackest possible shades. Alexia’s murders, while graphic, frequently slip into the dark slapstick of early Peter Jackson, and one has to laugh at her showstopping dance routines, which evoke a sexuality somewhere between ZZ Top and JG Ballard. Then there are the scenes in which she attempts to fit into her new family. Her newfound father’s attempts to reintegrate his “son” into society and train him as a firefighter are played so straight that one might almost be tricked into thinking they’re watching an earnestly inspirational story, if not for the fact that Alexia– shaved, gaunt, and mute by necessity– never even begins to blend into her new surroundings. Imagine Max Schreck’s Nosferatu dropped into the Pete Davidson role in The King of Staten Island, and you’ll have a good idea of the tone.

And yet, in spite of the film’s macabre nature, these scenes are honestly kind of sweet. Credit here must be given to Lindon, who takes what could easily have been a stock foil and fleshes him out into a remarkably complex character. Captain Vincent’s (apparent) blindness to the fact that this pregnant thirtysomething is not actually his 17-year-old son is a source of comedy, of course, but one gets the sense that there’s more going on beneath the surface: is he really suckered in by Alexia’s ruse, or is he just turning a blind eye to what he knows in his gut? And in the end, does it really even matter? For the past ten years, Vincent’s life has been shattered by tragedy, and he’s determined not to blow it, even if the deeply strange person he’s let into his home is clearly not his flesh and blood. There are even moments when Alexia herself seems to be drawn in: when Vincent trains her to perform CPR by singing “Macarena,” the moment is touching in spite of itself.

Then, of course, you remember that you are actually watching a sociopathic murderer with a gigantic metal fetus growing inside her. Titane is a masterpiece of depravity, piling on shock after shock until it begins to resemble a live-action adaptation of the Aristocrats Joke. But it isn’t just that, which is why it sticks so indelibly in one’s craw. Titane is a complex beast, filled with multiple layers of emotion, psychology, gender performance, and body horror (and, yes, a good amount of car-fucking). It is one of the most original films of the year– in other words, it’s way too good for the Oscars.