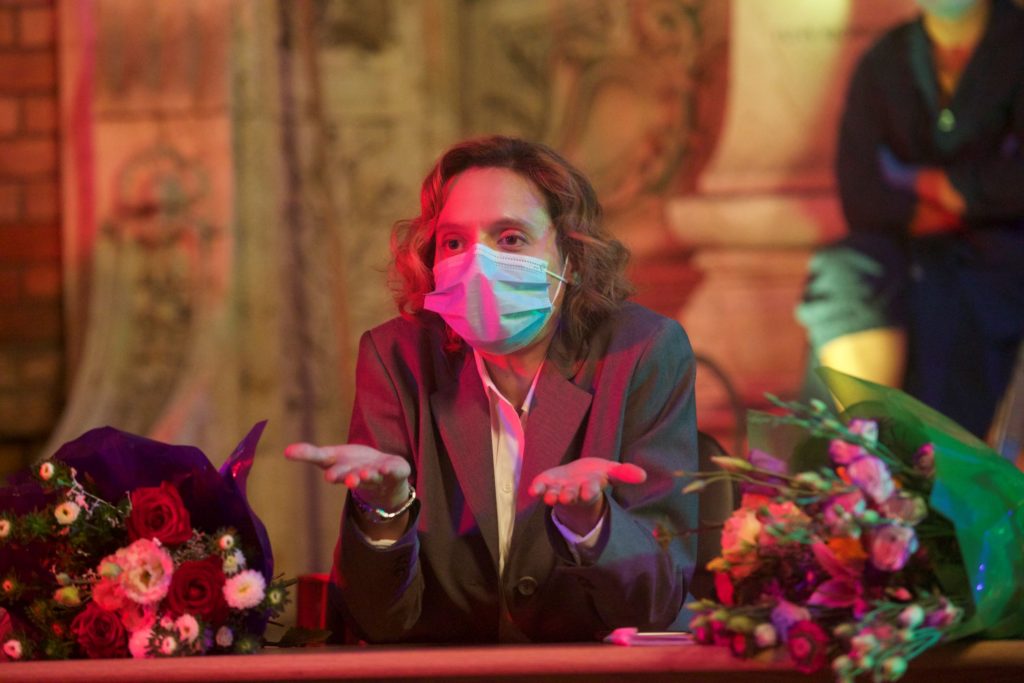 In my review last year of Juliano Dornelles and Kleber Mendonça Filho’s incendiary thriller Bacurau, I speculated that “world cinema is the new punk rock.” That film, along with Bong Joon-Ho’s zeitgeist-defining Parasite (the two both won awards at the 2019 Cannes Film Festival), capitalized on the radical possibilities of cinema in a way that American film seldom dares. Though there are, of course, notable exceptions, the Hollywood establishment is by and large too beholden to cultural, corporate, and overseas powers-that-be to produce and/or recognize truly bold work. For every Get Out there is a Green Book, and while the Academy’s refreshing recognition of Parasite feels like a step in the right direction, it remains to be seen whether this proves to be a bellwether or a fluke.

In any event, I would pay to be in the room when Academy voters screen Bad Luck Banging or Loony Porn, the new film by Romanian provocateur Radu Jude. This is not a film which I imagine will be embraced by the cozy crowds of the Kendall Square Cinema, nor do I imagine it will join Bacurau and Parasite on Barack Obama’s annual year-end roundup. This is a bracing, deliberately offputting film, which manages to be both didactically political and gleefully profane and scatological (often within the same shot). I am perhaps not sufficiently well-versed in Romanian politics to pretend to have fully taken it all in, but it is breathtaking to witness a film so purely, righteously angry.

Any notions that the title is an exaggeration of the film’s contents will be dispelled in its opening moments, an extended (and seemingly unstimulated) sex tape between a man and a woman (complete with offscreen interruptions from the couple’s nanny). The woman, we soon learn, is Emi Cilibiu (Katia Pascariu), a teacher at a prestigious local private school, who learns to her horror that the tape has been uploaded to the internet—with chaotic results.

This sounds like a setup for a fairly conventional modern cringe comedy, but while the film does eventually get to a place one might expect (kind of), its path to this point is anything but simple. Instead, it is structured as a triptyque of sorts, separated by intentionally distancing title cards. These three movements are so radically different (and so lengthy) that they can only really be discussed as pieces unto themselves. So let’s break them down one by one.

The first act of the film follows Emi on what seems to be the day of the leak. We see Emi attempting to run her daily errands through the busy streets of Bucharest—tutoring a student, grocery shopping, buying a present from her daughter—while periodically taking increasingly harried phone calls from her husband and colleagues. We learn from her side of the conversation that the situation is snowballing from bad to truly awful: every time they get the video taken down, it pops up again on PornHub, or on a private blog, or on the phone of one of her pupils. These scenes capture the stressful energy of an Uncut Gems; Emi’s emotional state is matched at every turn by jackhammers, police sirens, and fistfights breaking out between pedestrians and motorists. At one amusing point, Emi yells into her phone “Hang on, there’s an ambulance!” only to take refuge in a clanging streetside video arcade.

This section of the film sets the scene for Emi’s story, of course, but it also serves as a sort of documentary about modern urban decay. Jude’s camera tends to linger long after Emi has left the scene, drifting towards scenery which strikes him as funny or ironic: a tastelessly suggestive billboard, a cheaply made backpack advertising The Emoji Movie, a row of ancient statues who appear to be shrugging at their very surroundings. At one point (which may or may not have been scripted), an elderly woman crosses the foreground, looks directly into Jude’s camera, and casually says “Eat my cunt.” The effect is a little like those great scenes in John Waters’ early films where he sets Divine loose through the streets of downtown Baltimore: with their documentary subjectivity, they turn their real-life subjects into objects of satire.

The second act presents as radical a gear-shift as I believe I’ve ever seen in a film: Jude abandons his protagonist and narrative entirely to present an alphabetical “dictionary” of various political and social terms, by way of found footage, blackout skits, and mordantly funny epigrams. This portion of the film is clearly indebted to later-period Godard, in which the director pushed his on-sleeve leftist politics from subtext to text, creating pictures which blur the line between film and video essay. But it also calls to mind everything from Ambrose Bierce’s The Devil’s Dictionary to the Mondo movies of the ‘60s (or, at the very least, Mr. Mike’s Mondo Video). Much of the subject matter revolves around the political strife of Romanian history, and while I can’t pretend to be an authority, it’s pretty easy to get the gist of Jude’s perspective: we see video footage from the late 1980s of cheerfully fascist singalongs and pageants, and some truly withering statistics about the country’s religious and political establishment. This section of the film is willfully dense, and almost seems designed to be studied rather than watched and enjoyed, but two “definitions” stood out as key to understanding the film’s point of view. Under “Cinema,” Jude tells the story of Medusa, likening the silver screen to the polished shield which allows Perseus to safely view the horror of his opponent. Then there’s the dictionary’s final term, “Zen,” in which Jude concludes, “Human life must be seen as both tragedy and comedy.”

This certainly serves as a segue into the film’s final (and most nominally conventional) act, which returns to Emi for her “trial” before her school’s parent association. The scene opens with one outraged parent pulling up the video on her iPad and playing it, in its entirety, for the group (as well as the audience, again), and only descends further into chaos from there. The satire here is as broad and didactic as any new wave cinema of the 1960s: one parent is a general dressed in full regalia, another is a priest and takes the church’s line, and so forth. The discourse bounces back and forth along ideological lines, and at times threatens to overwhelm the film itself as the characters recite long blocks of text from various political thinkers (I’m reminded of the scene in Crumb in which we see Charles’ unpublished, increasingly unhinged comics, his characters rendered nearly invisible beneath enormous speech bubbles). Things get so out of hand that it eventually splits into three possible endings, a la Clue, the last of which finally tips the story into full-on absurdity.

Bad Luck Banging was filmed in the midst of the pandemic, and represents something of a turning point in COVID-era cinema. This is not a film “about” the health crisis– leaked sex tapes are of course a constant– but neither does it pretend things are fine. Characters wear masks when gathered in public places, and the conversation occasionally drifts to the topic of the day (“No one’s caught COVID from the Eucharist spoon!” one customer insists at the pharmacy). Instead, this is the first film I’ve seen which treats the pandemic as a given, and uses its “new normal” as a springboard for jokes (in one inspired running gag, several characters wear novelty facemasks, rendering their hyperbolic arguments of decency even more absurd). Time will tell, I suppose, whether these elements render the film a capsule of a specific moment in time, or simply the first to acknowledge a grim reality.

In case it isn’t clear, Bad Luck Banging is about as subtle as a sock in the jaw, and one might find their patience tried by Jude’s in-your-face polemicism. But there’s an undeniable thrill in its bristling energy and take-no-prisoners approach. There are moments when there are so many things going on that some of the gags begin to resemble the doodles in the margins of MAD Magazine. While it owes a clear debt to revolutionaries past (Godard in particular), Bad Luck Banging is, without a doubt, something you’ve never seen before. It’s raw, crude, and furious– and if that isn’t punk rock, I don’t know what is.