This isn’t going to be an easy review for me to write.

I’ve never liked Adam Sandler. This isn’t a case of outgrowing youthful predilections; I’m old enough to remember when he was on Saturday Night Live (though not old enough to have been allowed to stay up late enough to watch him), but even as a child I found his brand of raucous, juvenile humor profoundly grating. I would roll my eyes when his songs came on The Dr. Demento Show, and grit my teeth when the VHS of Happy Gilmore would inevitably get busted out at sleepovers. I kept this disdain as I grew older; I refused to watch Punch Drunk Love on general principal, and breathed a sigh of relief when he was replaced by Eli Roth in Inglourious Basterds. The root of this aversion, I think, is that Sandler, with his array of braying man-child voices and fondness for shout-based humor, represented a very particular strain of loudmouth townie jerk-kid for which I had little patience (whether these classmates were influenced by Sandler or these traits are particular to the youth of rural-suburban New England, I’m still not sure).

So it is with a heavy heart that I must report the following: Uncut Gems is a phenomenal movie, and Adam Sandler is genuinely excellent in it.

It helps that Sandler has been specifically cast as a character succinctly described by his wife (Idina Menzel, the second in a jaw-dropping parade of what-the-fuck casting choices) as “the most annoying person I have ever met in my life.” Howard Ratner is a jeweler in New York’s Diamond District who staked a name for himself in the ‘90s devising novelty bling for the hip hop set (see above image). Howard is the sort of person who seemingly has everything– a successful business, a nuclear family, an expansive home in Long Island– but is forever in search of the Next Big Score, whether in the form of precious stones or increasingly high-stakes sports wagers. These two pursuits come together when Howard acquires a massive uncut black opal which catches the eye of Celtics great Kevin Garnett (played convincingly by Celtics great Kevin Garnett). Sensing an opportunity, Howard lends the stone to KG for good luck in his game (with an eye toward corralling him into an eventual auction), takes his championship ring as collateral, then immediately pawns it and rolls the proceeds into an already-outlandish bet on said game. This doesn’t sit well with his primary source of funds, brother-in-law/loanshark Arno (monologist Eric Bogosian, who, coincidentally or not, was once played by Sandler in an SNL skit). Soon, all these disparate parties are pulled into Howard’s chaotic orbit, and if being constantly hounded by mobsters, NBA players, and assorted lowlives bothers him, he doesn’t let on. 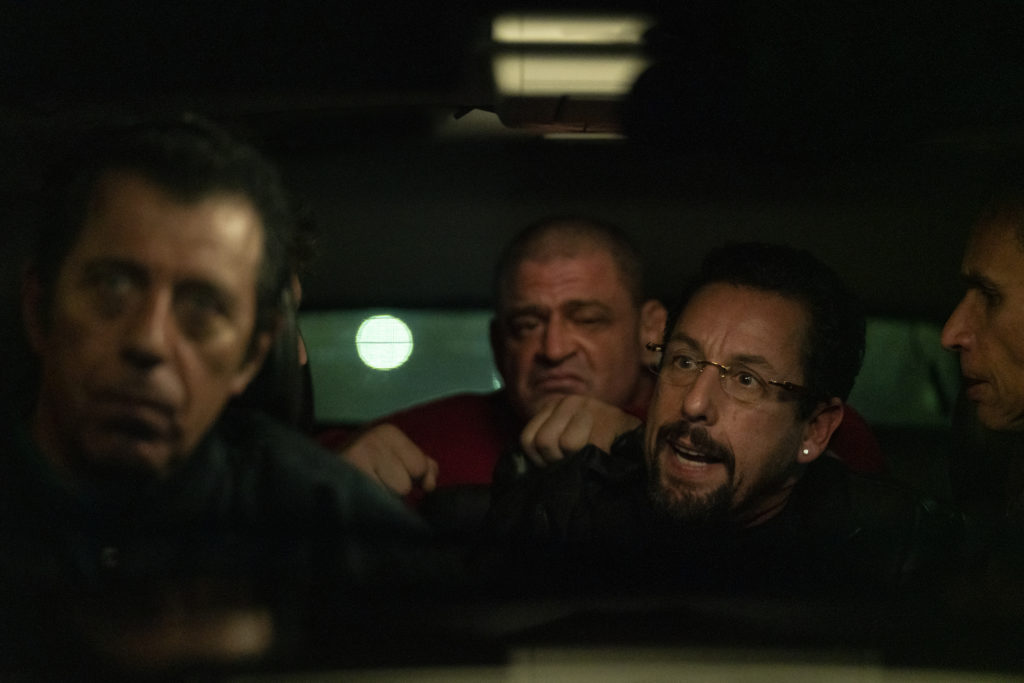 If all of this sounds chaotic, it is. Howard Ratner is a veritable human tornado (with apologies to the man played by this year’s other big SNL star-turned-thespian), his life a never-ending cacophony of telephones, alarms, traffic, and people angrily yelling at him to give them their damn money already. Like a tweaked-out Robert Altman film, nearly every scene has at least three or four characters talking over each other (writer-directors Josh and Benny Safdie reportedly worked on and off on the screenplay for over a decade, and I don’t have a clue what that document could possibly look like). About ten minutes into the movie, I gave up on taking notes and returned my notepad to my pocket; so furiously paced is this movie, and so uninterrupted is its constant thrum, that if you take so much as a moment to catch your breath it will just keep on going without you.

As in their previous feature, Good Time, the Safdies create a world that is at once dizzyingly strange and profoundly normal. Each character feels like a real person (indeed, many are– the Safdies have a penchant for selecting non-actors for their interesting faces); they fumble their words and repeat jokes, not in a polished running-gag screenplay way, but in the manner of your uncle who recites the same Caddyshack lines every time he gets a little drunk. Yet the film’s constant base level of noise and restless action places it in a sort of heightened reality. The Safdies have been making films together since childhood, and Uncut Gems resonates with the sort of shared feverish shorthand and nonsensical inside jokes that tend to arise when two people are fully synchronized creatively– think of the claustrophobic psychedelia of early Ween, or perhaps what would happen if Michael Shannon and Ashley Judd’s characters in Bug focused their energy into making movies. This frenzied tone is amplified by the delirious score by Daniel Lopatin (aka Oneohtrix Point Never), which is the only modern soundtrack I can think of which takes the phrase “retro synths” and opts to run in the direction of Kitaro rather than John Carpenter. The film is clearly indebted to the films of the 1980s which immediately followed the American New Wave (not for nothing is Martin Scorsese an executive producer), but Lopatin’s score makes it feel like it could actually be a lost artifact.

Of course, in order to believe that, you’d have to look past the truly bonkers supporting cast (in addition to those previously mentioned, the film contains Lakeith Stanfield, Judd Hirsch, Josh “The Fat Jew” Ostrovsky, and The Weeknd, plus a brief voice-only role from Tilda Swinton). Remarkably, however, the standout (apart from the leading man) winds up being another one of the Safdies’ non-actor discoveries: Julia Fox, who plays Howard’s mistress/employee Julia. At first, Julia appears to be a superficial, perhaps vaguely misogynistic caricature of a millennial gold-digger (“You’re so extra,” she tells Howard when he complains about her lateness to work, her eyes not straying from her Instagram feed). But as the story unspools and the stakes grow higher, Julia’s defenses begin to fall away, and we start to see a more nuanced portrayal. Like Howard, Julia is something of a hustler, but the more time we spend with her and the more we see of her own hopes and feelings, she begins to look less like a joke and more like the film’s true protagonist. Fox is apparently a well-known figure in the New York bohemian scene, having dabbled in everything from writing and photography to custom jewelry, but this is, remarkably, her first feature film role. Mark my words: it will not be her last. 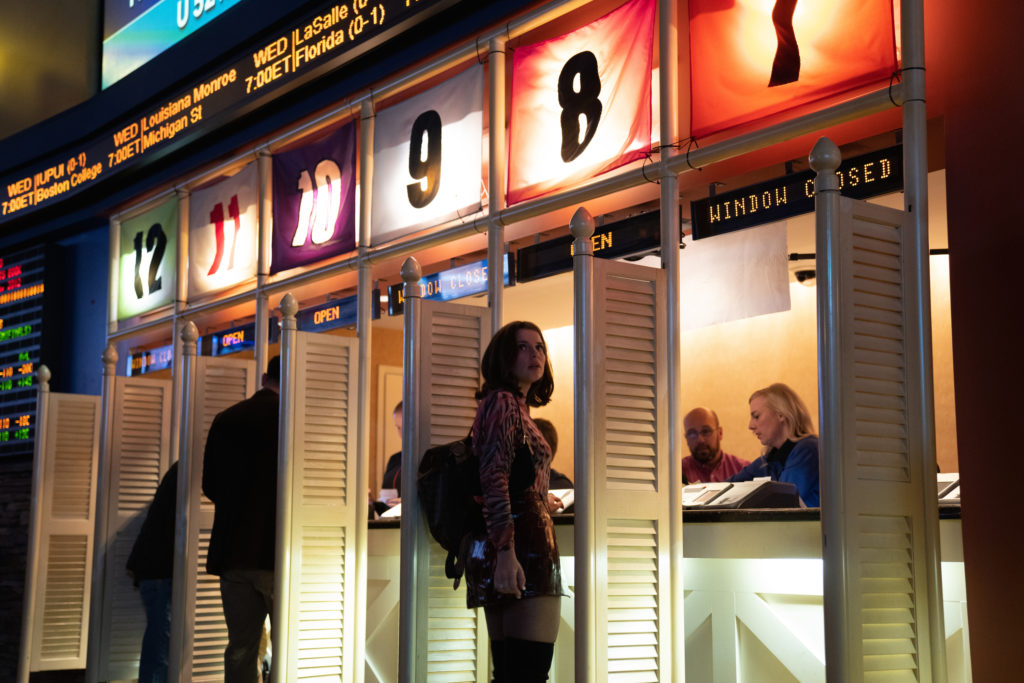 All that being said, there’s a reason Uncut Gems is being billed as The Adam Sandler, Serious Actor Show. As Howard, Sandler takes everything that makes his customary persona so irritating– the silly voices, the broad physical schtick, the element of improbable wish-fulfillment– and simultaneously inverts them and focuses them to a burning laser. On paper, even the plot beats and set pieces wouldn’t be out of place in a typical Happy Madison production: Sandler gets stripped naked and stuffed in his trunk during his daughter’s school play; Sandler fields a call from his proctologist as his office is ransacked by thugs; a guest-starring famous athlete becomes comically obsessed with a stone he’s convinced possesses magical powers. Uncut Gems is not without humor– on the contrary, it’s often very funny– but its nightmarish sensory overload pushes it into territory that could easily drift into the oppressive. Sandler’s presence cuts the tension somewhat; his charisma and humor gives you someone to root for in spite of yourself, and his obnoxiousness keeps you from feeling too bad when he inevitably gets clocked. Ratner carries himself with such confidence that you’re often left unsure whether he’s playing eleven-dimensional chess or just cheerfully making a series of tremendously poor decisions. In many ways, Uncut Gems mirrors the classic film noir everyman-gone-astray template, except Howard Ratner doesn’t stumble down the rabbit hole to ruin– he charges head-on.

He’s also no everyman. Howard Ratner is, by any metric, an awful human being, yet it’s clear that the Safdies hold him in great affection (he is evidently based, at least in part, on stories of their own larger-than-life father). Like Woody Allen’s Broadway Danny Rose, Ratner is the sort of person who commands any room he enters (even if in an “Oh god, this fucking guy” way), and you get the impression that everyone he comes in contact with has their share of Howard Ratner Stories. I don’t think I’d enjoy spending much time with him– as a retail veteran, I found myself most strongly identifying with the auction house receptionist who’s clearly an old hand at dealing with his shit– but seeing him within the confines of this masterfully strange film is a pleasure. The Safdies have managed to invest me in a film in which the emotional climax consists of watching Adam Sandler watch a Celtics game, and for that alone they deserve all the awards.