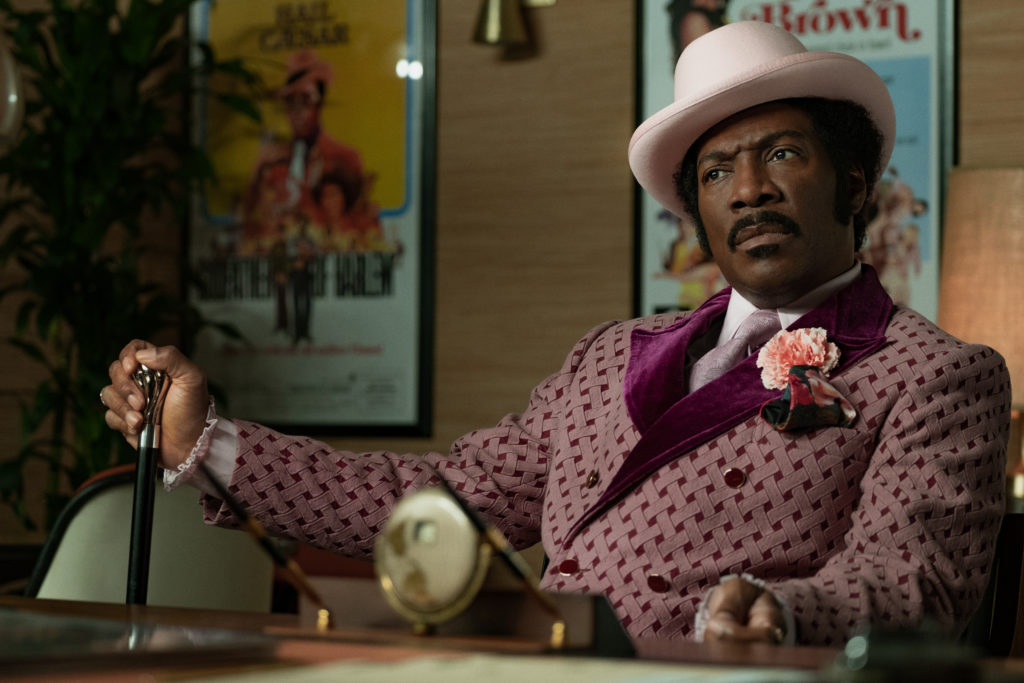 When I was 14 years old, I got my first turntable. This was the late ‘90s, when collecting vinyl was deeply unfashionable; I can recall buying original-press Frank Zappa LPs because they were cheaper than the CDs. But I quickly learned that there was a vast landscape of wild, weird records that would likely never find their way to the CD racks at my suburban Strawberries– especially for a budding comedy nerd like me. On weekends, I’d delve into the dust-covered comedy bins in used record stores across New England, snapping up out-of-print Firesign Theatre albums and things with titles like Music to Break a Sub-Lease. More often than not, however, these racks had a separate sub-section, usually labeled “Party Records” or “Stag Records,” with daunting warnings that these records were “FOR ADULTS ONLY.” In retrospect, most of these records were likely quaint holdovers from the burlesque era like Rusty Warren’s Knockers Up!, one cover burned itself into my mind from my furtive glances into this forbidden section: Rudy Ray Moore’s Eat Out More Often.

For the unfamiliar, Rudy Ray Moore was something of a legend of black American entertainment, whose unique charisma and gleefully filthy (and unapologetically black) material propelled him through a series of phenomenally successful records and films, often while bypassing entirely the conventional means of promotion and production (you try playing a Moore record on the radio). His offbeat, rhyming delivery (as well as his self-styled pimp persona) proved hugely influential to both the nascent hip hop scene and to a generation of emerging black comics– including a young Eddie Murphy, who brings the entertainer back to life in the form of a tremendously entertaining new biopic. 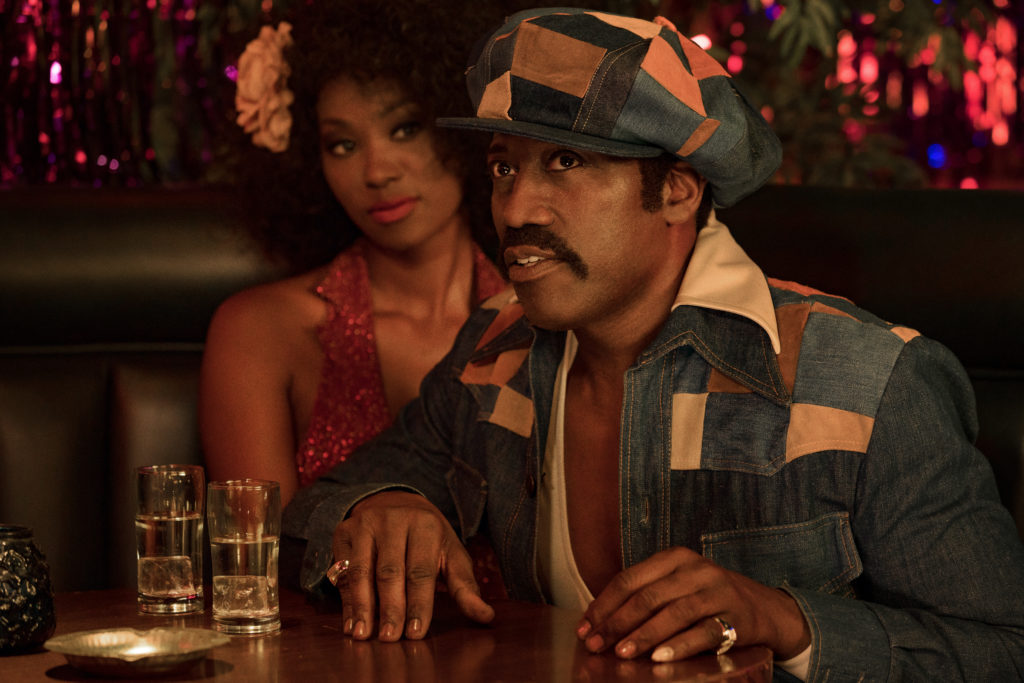 When we meet Rudy Ray Moore in Dolemite Is My Name (which, as any blaxploitation fan will tell you, is only half a title), his career is at a low ebb. Paunchy and balding, Moore lives in a cramped apartment with his aunt (Luenell) between crates of unsold singles from a failed career as an R&B singer (he claims the label made the “mistake” of signing James Brown over him). Contemplating a comeback between working at a record store and moonlighting as the emcee at a divey nightclub, Moore gets a bolt of inspiration from the rantings of the town drunk (Ron Cephas Jones): rather than trying to succeed with conventional nightclub comedy, he decides to craft an outrageous new persona inspired by the boastful rhymes and raunchy stories that have served as an essential part of the African American storytelling experience since the Signifying Monkey. The character, dubbed “Dolemite,” is a huge success at the club, and soon Rudy takes his show on the road, triumphantly returning to the Chitlin Circuit venues he graced in his previous career and selling privately pressed records out of the trunk of his car. Eventually, the world takes note of his success, and he gets scouted by indie label Kent Records with aims to market his record to “black people who don’t shop from car trunks.” The plan works, and soon this vulgar comedy record with zero airplay cracks the honest-to-god Billboard charts.

This alone might serve as the arc of a perfectly satisfying biopic, but even with success, Moore remains restless. Frustrated at the lack of authentically African American comedy on the screen, Moore embarks on the quixotic task of self-financing a Dolemite movie. With blaxploitation star D’Urville Martin (Wesley Snipes, clearly having the most fun he’s had in years) on board as director, socially conscious playwright Jerry Jones (Keegan-Michael Key) penning the screenplay, and a motley assortment of dorky white film students and Moore’s own friends and family serving as crew, Moore battles his lack of money, experience, and even electricity to get his movie made. 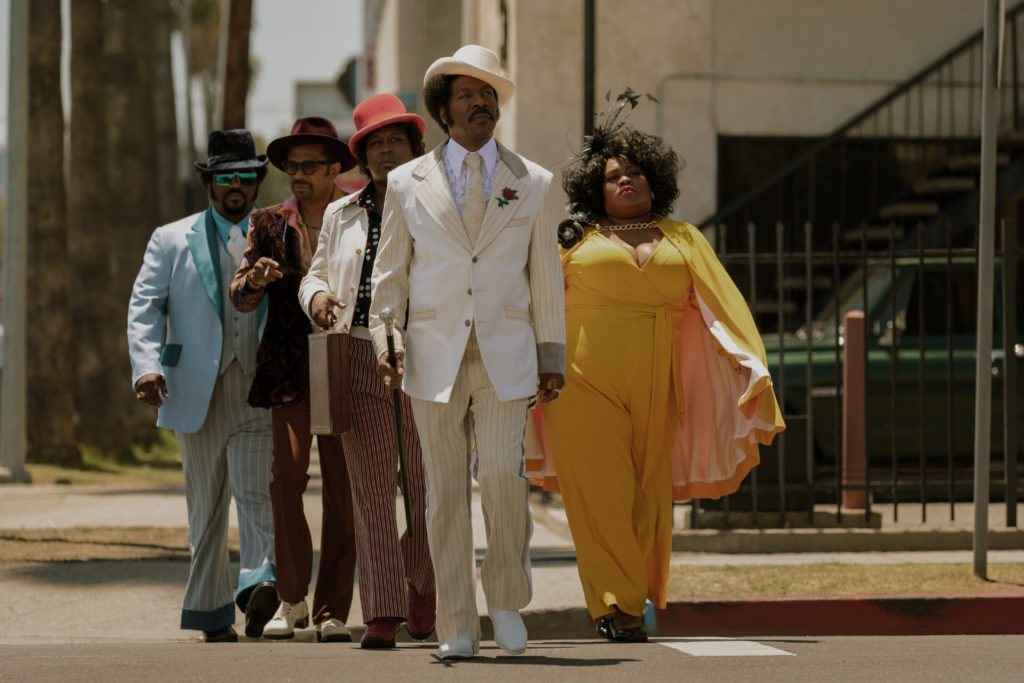 First things first: Eddie Murphy owns this movie. Murphy has been so ubiquitous for so long, especially to our generation, that it can be easy to take for granted just how good he can be (his work on SNL— which he joined when he was nineteen!– remains shockingly funny, even after decades of Shrek sequels). Murphy clearly reveres Moore, and while he doesn’t really look much at all like him, he still manages to check his stardom at the door and disappear into the character. Rudy Ray Moore was larger than life character on and off stage, and, combined with Murphy’s own charisma, one can easily see how this down-on-his-luck showbiz lurker could turn himself into a superstar through sheer force of will, and pull everyone around him into his orbit to help make it happen.

Dolemite Is My Name was written by Scott Alexander and Larry Karaszewski, the powerhouse team behind such blockbuster biopics as The People vs. Larry Flynt, Man on the Moon, and TV’s American Crime Story: The People vs. O.J. Simpson. Most relevantly, the duo also wrote the screenplay for Tim Burton’s Ed Wood, to which this film has widely been called a “spiritual sequel.” The comparison is understandable: like Moore, Edward D. Wood, Jr. was a Hollywood outsider bent on realizing his vision by any means necessary, and Moore’s films are every bit as enthusiastically amateurish as Wood’s. But unlike Plan 9 from Outer Space (or The Room, itself the subject of a barely-making-of comedy), Dolemite is enjoyable today on precisely the level that Moore intended. The film, like the character, is intentionally ridiculous, and its ramshackle production values and rough edges only enhance its charm. When you have a scene in which the protagonist has sex so dynamically that the picture frames slide up and down the walls and the ceiling caves in, it’s hard to complain that you can see the strings.

The same could be said about Dolemite Is My Name. Does it occasionally fall into generic “rise to stardom” biopic plot beats? Sure (though, in fairness, Alexander and Karaszewski probably helped cement many of those beats). But the whole thing is so funny, joyous, and entertaining that it’s nearly impossible to care. If you’ve ever made a movie on a shoestring budget, you’ll instantly recognize the triumphs and hardships endured by the characters– and, if you haven’t, you just might be inspired to pick up a camera. Against all odds, Moore and his crew managed to not only make their movie, but make it good, and hugely profitable at that, and by the end it’s impossible not to cheer.