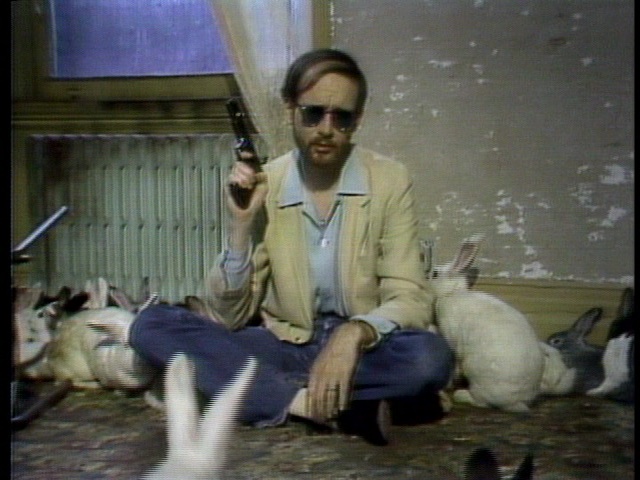 In Cult Case Files, Hassle film editor Oscar Goff shines a light on cult classics of the distant past, the alternate present, and the possible future, and tries to get a bead on just what the words “cult classic” actually mean. To catch up with the rest of the series, click here.

The history of Saturday Night Live on the silver screen is a largely ignominious one. With the exception of a couple of anointed classics (your Blues Brothers, your Wayne’s Worlds) and a couple of overlooked gems (which may be limited to Stuart Saves His Family and Magruber), the film division of the venerable sketch comedy institution is mostly known for turning out paper-thin showcases for already one-note characters, ranging from the blandly agreeable to the truly wretched. Few, however, remember the show’s first foray into cinemas. One year before Jake and Elwood embarked on their mission from God, audiences were treated to the big-screen debut of Mr. Mike, the on-screen avatar of early SNL writer Michael O’Donoghue. And, as the few who saw Mr. Mike’s Mondo Video can attest, it’s a far cry from A Night at the Roxbury.

In alternative comedy circles, Michael O’Donoghue was already a legend by the time he reached 30 Rockefeller Center. First published as an underground cartoonist in the pages of New York’s legendary Evergreen Review, O’Donoghue came to prominence as a featured writer, and eventually editor, of the fledgling National Lampoon. Today, the Lampoon is primarily known as a brand slapped on any number of post-Animal House fratboy comedies, but in the early ‘70s, it was a decidedly different beast: a monthly, text-heavy humor magazine which featured political satire, literary parodies, and a streak of jet-black humor. The latter was thanks in no small part to O’Donoghue, who favored a caustic blend of absurdism and shock humor (as he once famously quipped, “Making people laugh is the lowest form of comedy”). O’Donoghue matched his confrontational brand of humor with a larger-than-life persona: he was rarely photographed without his signature dark glasses and cheap suits, and was known to wield a cricket bat for menacing effect.* O’Donoghue’s most ambitious project was the National Lampoon Radio Hour, a weekly, syndicated sketch comedy show featuring such future stars as John Belushi, Chevy Chase, Christopher Guest, and Gilda Radner (among many others). One regular listener was Lorne Michaels, who poached much of the Radio Hour’s cast and writing staff for his new weekly show on NBC, and installed O’Donoghue as its first head writer.

O’Donoghue’s sensibility went a long way toward shaping the early Saturday Night Live, which was a far weirder and scrappier show than its current incarnation would suggest. But the constraints of network television quickly chafed the mercurial humorist, who found himself frustrated by the meddlesome board of standards and practices. At the same time, the rest of the writing staff began to feel the strain of coming up with 90 minutes of fresh material every week. To solve both of these problems, Michaels came upon a novel solution: O’Donoghue and a small team of writing-room loyalists would break off from the rest of the staff and film a feature-length TV special, packed with all the material deemed too weird or tasteless for the Not Ready for Prime Time Players. This show would, in turn, air as a fill-in show for SNL, giving the rest of the staff a much-needed break. If the show was a success, O’Donoghue would create new installments on a monthly basis, and the SNL team would be able to relax every three weeks.

Unfortunately, it was not to be. According to legend, halfway through the first skit of Mr. Mike’s Mondo Video— a lengthy, slow-motion montage of cats being thrown into a swimming pool to a synthy cover of Joe Meek’s “Telstar”– NBC Vice President Herminio Traviesas leaned over to his assistant and whispered, “This will air over my dead body.” The project was shelved, O’Donoghue stormed off, and SNL took another step toward becoming the toothless oaf it is today. 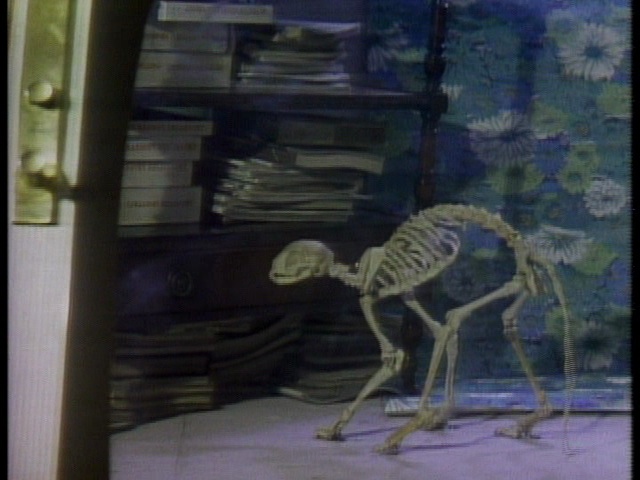 A completely normal scene from a network TV comedy sketch

Watching Mr. Mike’s Mondo Video, it’s not difficult to understand Traviesas’ point of view. The film is, ostensibly, a showcase for Mr. Mike, an early recurring character played by O’Donoghue himself. An ever-so-slight exaggeration of O’Donoghue’s real-life persona, Mr. Mike could most often be seen reading “Least-Loved Bedtime Stories” (such as The Little Engine Who Died) or performing identical “impersonations” of various celebrities with needles plunged into their eyes. Rather than follow the soon-to-be-standard model of throwing this character into a narrative, however, O’Donoghue opted to fashion the film into a rough parody of the infamous 1962 Italian shockumentary Mondo Cane, with Mr. Mike serving as narrator and onscreen host. The result is something of a mishmash of skits, short films, found footage, and alternative musical performances, and while it’s occasionally rough around the edges, it’s also a fascinating window into a genuinely unique comic mind.

Apart from the aforementioned “Swimming School for Cats” sketch (which walks a disquieting line between adorable and cruel), Mondo Video is frontloaded with relatively conventional skits which one can assume were originally pitched for SNL: diners at a French restaurant pay extra to be abused by the waitstaff, and parishioners at a Jonestown-style church worship Hawaii Five-O star Jack Lord (under the watch of a young Dan Aykroyd and Paul Shaffer). But any resemblance to recognizable TV comedy drops out pretty quickly, as the familiar faces disappear and O’Donoghue careens fully into surrealism and non-sequiturs. Much of the special consists of unnerving experimental short films (including a few by Hardware Wars director Ernie Fossellius) and bits of archival ephemera, such as a surprisingly graphic stag reel from 1938 and the infamous footage of Thomas Edison electrocuting an elephant. O’Donoghue’s narration pops in and out at random, often with the goal of confusing rather than elucidating, and he frequently appears on camera in a trench coat inexplicably filled with live rabbits. The musical guests consist of novelty scum-rocker Root Boy Slim (playing in a bar full of blow-up dolls), Sex Pistols bassist Sid Vicious (whose performance of “My Way,” taken from The Great Rock ‘n’ Roll Swindle, plays out in silence, a scroll explaining that they couldn’t clear the rights to the song), and Klaus Nomi, in a haunting bit of Super 8 footage that truly feels beamed in from another planet. Mr. Mike’s Mondo Video takes the form of a comedy special, but you may find yourself creeped out more than tickled– which was likely precisely O’Donoghue’s goal.

Of course, even if NBC had aired the special, it’s uncertain whether Mondo Video would have taken off as a series. For all of his formidable talent as a writer, O’Donoghue had never directed a film before, and it’s evident in some of Mondo Video’s awkward staging and slack editing (O’Donoghue reportedly brought in National Lampoon Radio Hour editor Bob Tischler to try to whip it into coherence). It also seems unlikely that O’Donoghue’s temperament would have made the proposed monthly shooting schedule tenable. Following the failure of Mondo Video (which was given a lukewarm film festival release before being dumped to video rental stores) and his departure from SNL, O’Donoghue would never quite regain his mojo. He had a supporting role in Woody Allen’s Manhattan, co-wrote the screenplay to Scrooged (the final cut of which he hated), briefly returned to SNL in its mid-’80s doldrums, and collaborated with Mr. Bill creator Walter Williams on a second failed pilot simply called TV, but would never again enjoy the creative power he wielded in the ‘70s. Toward the end of his life, O’Donoghue was befriended by Quentin Tarantino, and the two were in talks to collaborate on a project when O’Donoghue suddenly died of a cerebral hemorrhage at age 54. Today, O’Donoghue remains a top-tier namecheck for comedy nerds, but his body of work remains disappointingly scant. 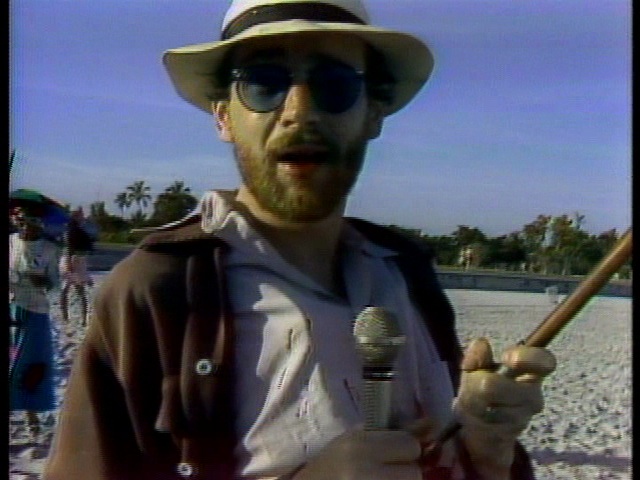 The end of Mr. Mike

But take a moment to imagine what might have been, if NBC had been hip enough to take a chance on this weird little show, if O’Donoghue had maintained the discipline to keep the experiment going. How different would the history of American comedy be if we’d gotten monthly installments of Mondo Video beamed into our homes in 1979? Mr. Mike’s Mondo Video can make for choppy viewing today (it does indulge in some of the casual racism and misogyny that characterized both the humor of the day and the “mondo movie” genre), but its surreal anti-comedy and patchwork aesthetic make a lot more sense in the age of Adult Swim and Tim & Eric. Who knows what weird tributaries we might have gone down if comedy this purely, deeply weird had been given a mainstream platform a quarter century ahead of schedule? Mr. Mike’s Mondo Video is a rare example of a true comedic auteur given complete creative control, and the purest distillation of one of American humor’s most unique voices– even if it is, in its host’s own words, “not for the weak, or even for the strong.”

* – For a fuller illustration of the O’Donoghue persona, you can see him played by Thomas Lennon in A Futile and Stupid Gesture, Netflix’s biopic of National Lampoon founder Doug Kenney.

WHERE TO WATCH IT: Mr. Mike’s Mondo Video does not seem to be streaming anywhere, but it is available for rental or purchase through most digital outlets. Shout! Factory released an excellent DVD in 2009, with a handful of O’Donoghue’s SNL skits, Bill Murray’s on-air eulogy from 1994, and audio commentary from co-writer and longtime O’Donoghue collaborator Mitch Glazer; the disc appears to be out of print, but it’s still pretty cheap on the secondhand market at press time, so I’d recommend getting it while the getting’s good. And, of course, there’s always Youtube.

FURTHER STUDIES: You should probably see Mondo Cane, which, if you can get past the clearly staged scenes, the pervasive racism and exoticism, and the human and animal cruelty, is a fascinating bit of hokum with a weirdly lovely soundtrack (this may send you down the rabbit hole of copycat “mondo movies,” but maybe pump the brakes before you hit Faces of Death). Michael O’Donoghue served as head writer and occasional performer for the first three seasons of Saturday Night Live, all of which are available to stream on Hulu and Peacock and very much worth watching. For my money, though, O’Donoghue’s best work was with the Lampoon. Early issues of National Lampoon are still cheaply available via eBay, but make sure you stick with the 1970-’74 range for the best material (I should probably warn you here that these magazines contain a goodly amount of non-PC humor, but if you haven’t gleaned that by now, what article did you just read?).

NEXT TIME: We take a look at one of the giants of cult cinema, in danger of being forgotten in the age of streaming.