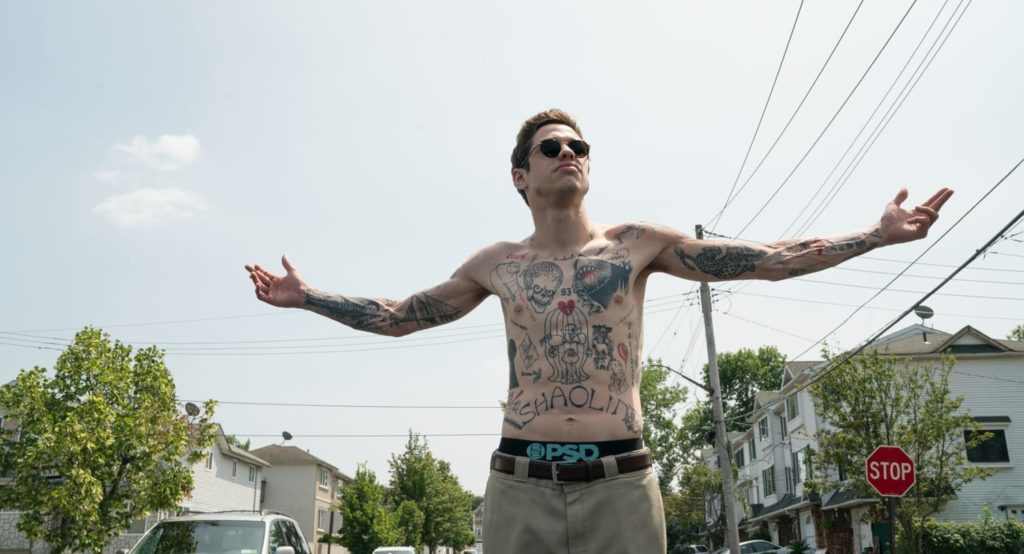 In the two decades since the cancellation of the beloved one-season wonder Freaks and Geeks, the paths traveled by co-creators Judd Apatow and Paul Feig serve as a fascinating study in contrasts. Feig has carved out a niche with such wildly successful comedies as Bridesmaids and The Heat, which provide female superstars like Melissa McCarthy and Kristen Wiig roles as meaty and raunchy as their male counterparts– in other words, “guy movies” for women. Apatow’s films, conversely, could perhaps be described as “women’s pictures” for men. With their sprawling stories and heart-on-sleeve emotions, Apatow’s films (which include Knocked Up, Funny People, and The Forty-Year-Old Virgin) are every bit the melodramas as those of George Cukor or Douglas Sirk. The difference, of course, is that rather than showcasing the sophisticated dilemmas of actresses like Elizabeth Taylor and Bette Davis, Apatow focuses on likable schlubs in modern, relatable situations. The result is a peculiar mix of big feelings and dick jokes, and while he’s directed about as many commercial flops as smash hits, the shadow he casts across the past decade and a half of American comedy is undeniably long.

For his latest feature, The King of Staten Island, Apatow more or less splits his auteur status with his star, SNL breakout and tabloid fixture Pete Davidson. Davidson co-wrote the screenplay (along with Apatow and SNL writer Dave Sirius) as a means of exorcising his own trauma: his real-life father, a firefighter, died on 9/11, no doubt contributing to Davidson’s well-publicized demons. The resulting film is clearly incredibly personal, and on many occasions very funny– but also messy, bloated, and ultimately frustrating.

Davidson stars as Scott Carlin, a twentysomething slacker living with his mother (Marisa Tomei) and college-bound sister (Maude Apatow, the director’s daughter). Scott is an artist at heart with a half-serious dream of opening a “tattoo restaurant” (“Ruby Tattoosday!”), but the childhood loss of his father, a hero firefighter, has left him wracked with anxiety, a suite of substance abuse problems, and a crippling lack of ambition. The closest things to stable relationships in his life are his mother, furtive hookups with his what-are-we-exactly childhood friend Kelsey (Bel Powley), and basement hangouts with his coterie of drug buddies (Ricky Velez, Lou Wilson, and Moises Arias), but Scott’s chaotic nature and toxic refusal to drop his defenses keep them all at arm’s length. After seventeen years alone, Scott’s mother strikes up a relationship with Ray (Bill Burr), the father of a child Scott attempted to tattoo in the woods (it’s less unseemly than it sounds, but only just). Scott is cautiously supportive until he learns Ray’s profession: he’s a firefighter. This revelation knocks the already unstable young man into a tailspin, upending what he has of a life and, possibly, giving him a much-needed kick in the pants to get his shit together… eventually.

First things first: The King of Staten Island simply has no damn business being nearly two and a half hours long. I get that this is a personal story, and that life is messy, and that Davidson and Apatow want us to inhabit this world and get to know its characters, but it’s still a movie; Greta Gerwig took a similarly episodic warts-and-all approach to semi-autobiographical dramedy with Lady Bird, and brought it in at a tight 94 minutes. Staten Island often feels as listless as its protagonist, bouncing from one life event to another with little sense of structure. It features two, entirely distinct feel-good self-improvement montages, with more than an hour of movie between them. A botched drugstore robbery, which feels in the moment like a point-of-no-return inflection point, ultimately proves to be just another thing that happens. At one point, Scott’s betterment seems to hinge on his sweet friendship with Ray’s children, but they more or less vanish halfway through the picture. How overlong is The King of Staten Island? It lets Steve Buscemi (as a fatherly elder-statesman firefighter) sink his teeth into a lengthy monologue about the heady, coke-fueled ‘90s, but by the time this scene arrived I found myself wishing he’d just get to the point.

This would perhaps be less of an issue if Scott Carlin was a more fun guy to hang with. As an actor and as a presence, Davidson is electrifying, and his hysterically raspy, bug-eyed intensity go a long way toward carrying the film (while I actively pray they never try to make a live-action Simpsons movie, Davidson would make a great Moe Szyslak), but his onscreen avatar is so abrasive and petulant that he’s often difficult to root for. A likable protagonist is not necessary for a great film, of course; Uncut Gems triumphs by acknowledging the toxicity of its central character, while The Beach Bum wins you over by portraying its antihero as an incorrigible agent of chaos. The problem with The King of Staten Island is that it sets itself up as a redemption story without presenting a character particularly worthy of redemption. This leads to an increasing disconnect in which the movie proceeds as if it were an inspirational story of human spirit (including a discomfitingly earnest stretch in which it essentially becomes an FDNY recruitment video), while still following the same old shitbag it started with. One gets the impression that Pete Davidson expects us to like Scott simply because he represents Pete Davidson.

And, to be sure, in the film’s better moments, that approach almost works. There are a number of individual scenes that are very funny, and play to both Davidson’s and Apatow’s strengths. A scene in which Scott suddenly learns that the restaurant he’s taken a job bussing divvies its tips via an impromptu nightly fight club escalates with hysterical speed, and the scene in which he casually agrees to give a strange child a tattoo of The Punisher captures the cockeyed weirdness that made Freaks and Geeks so charming. And, as can be expected from folks as well-connected as Apatow and Davidson, the cast is top-to-bottom great; a particular standout is Pamela Adlon, playing Ray’s much-suffering ex-wife with the same withering deadpan she brings to her breakout role in Better Things. 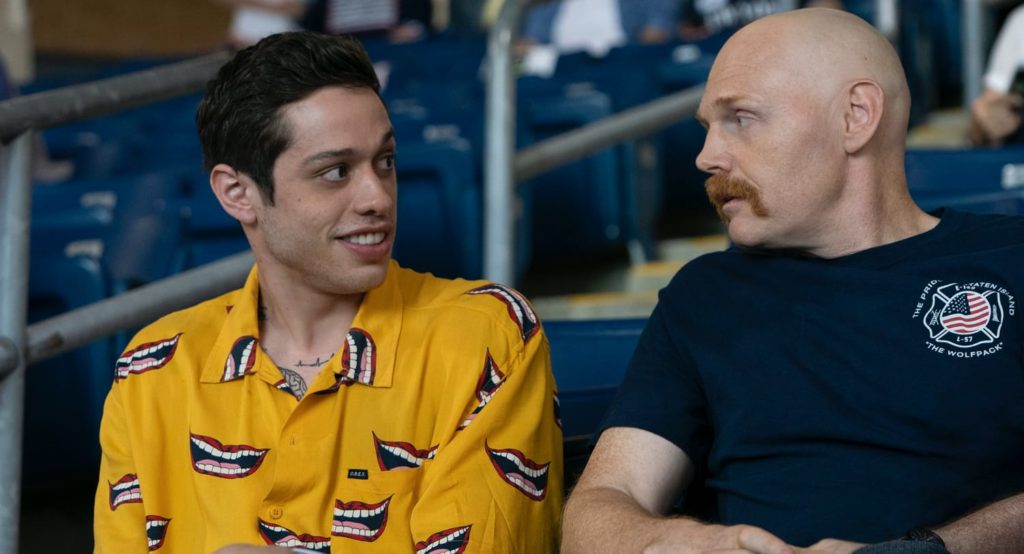 That being said, Adlon’s character also speaks to one of the film’s great flaws. By my count, she only appears in two scenes, which simply is not enough– and not just because she’s Pamela Adlon and she rules. In her second and final appearance, Scott plies her, in a wine-and-pot-fueled gab session, for dirt on Ray. She delivers with a string of accusations which, while maybe not horrifying, sufficiently paint him as kind of a dirtbag. Scott confronts Ray (in a hilariously ineffectual pool fight), but once the film swings into redemption mode for these two men, Ray’s shortcomings (and his ex-wife as a character) are never returned to. This is perhaps the most egregious example of the film’s tendency to treat its female characters as obstacles and/or goals for its male protagonists. It’s not that these characters are underwritten or poorly acted–Tomei in particular sells her character’s midlife melancholy– but that only makes it all the more frustrating that Apatow and Davidson opt to focus their dramatic arc solely on the macho angst of Scott and Ray (the film has a similar problem with its characters of color, all of whom are either petty criminals or ancillary characters who only drop in for one or two scenes). It’s difficult to relate to characters who refuse to grow; it’s difficult to enjoy a film that doesn’t seem to realize that.

Part of me feels like a jerk for being so hard on The King of Staten Island; it’s obvious that Davidson has poured his heart and soul into telling a story that means a lot to him. But just because a comedian decides to go personal and bare himself for a movie does not automatically make that movie Annie Hall. There’s a reason not a lot of great memoirs are written at age 27, and it’s tough to shake the impression that Davidson hasn’t progressed as far from the version of himself on screen as he wants us to believe– or as he believes himself. The King of Staten Island is a commendable swing– as debut starring vehicles for SNL players go, it’s a long way from It’s Pat— and with a second draft (and 45 minutes of pruning) it probably could have been a winner. As it stands, it will be primarily of interest to Davidson cultists and Apatow completists. Try as it may– and it does try– its good points simply aren’t enough to justify its maudlin self-indulgence or its gargantuan running time. Like its protagonist, The King of Staten Island can’t seem to figure out where it wants to go– and there’s only so much time you can spend in its basement before you need some fresh air.