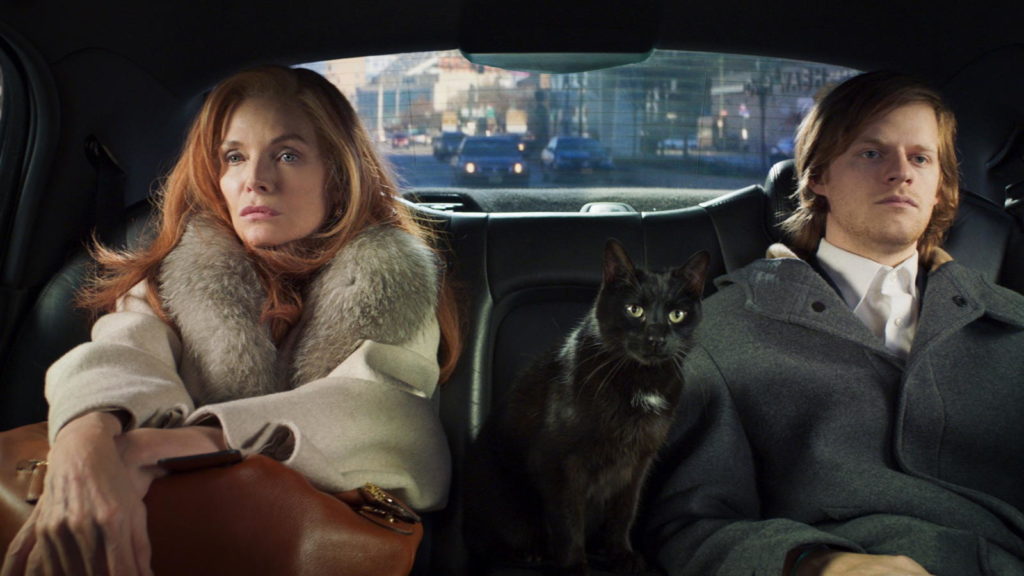 When I think back on 2020, one of the strangest things that stands out to me is that I managed to visit France. In February– less than a month before the world abruptly ended– my partner and I took a plane to Paris to spend a week on a friend’s couch. The trip was, in retrospect, bizarrely normal: we ate at cafes, saw the sights (including Versailles, the catacombs, and the tomb of Agnès Varda and Jacques Demy), and, apart from a couple of extra signs at airport security, carried on without a hint of what was to come. It was a wonderful trip, and a memory I would have treasured under any circumstance, but it’s become something more in light of the ensuing months: one final escape before being locked in my house forever. So it was perhaps inevitable that I’d have a fondness for French Exit, the closing night selection of the 58th annual (and my first!) New York Film Festival. It’s a breezy, blousy film which, for a couple of hours, allowed me to return there.

Michelle Pfeiffer plays Frances Price, a notorious Manhattan socialite who lives in a luxurious townhouse with her grown son, Malcolm (A24 it-guy Lucas Hedges), her cat, Small Frank, and a cloud of scandal emanating from the unusual circumstances of her husband’s death (she didn’t kill him, but she did take a few me-days before deciding to alert the authorities). As we meet her, we learn that Frances has finally reached the end of her hefty inheritance, and has been too busy spending the previous decade being Frances Price to establish any sort of employment or plan for the future. In a moment of nonchalant abandon, Frances decides to pull up stakes, sell her house and possessions, and drag Malcolm and Small Frank to her best friend’s spare apartment in Paris– much to the dismay of Malcolm’s kinda-fiancée Susan (deadpan indie queen Imogen Poots). Once there, Frances withdraws her remaining fortune in Euros with a secret agenda: once the money is gone, she will discreetly kill herself. But as Frances and Malcolm settle into their new home-away-from-home, they find themselves amassing a sort of ad-hoc family/social circle, including an oddball widow (Valerie Mahaffey), a soft-spoken private eye (Jarmusch regular Isaach De Bankolé), and a cruise ship psychic (Danielle Macdonald). Through it all, Frances Price floats with the same air of detached bemusement that’s become her trademark– even as she may or may not be reaching the end.

In many ways, French Exit seems like an odd pick for the closing-night selection of the New York Film Festival. Following a series of unequivocal masterpieces by some of our greatest living (and some dead) filmmakers, this is a decidedly lightweight piffle of a film; if Nomadland is a great American novel, French Exit is a beach read. But this plays to its advantage in ways that director Azazel Jacobs and screenwriter Patrick deWitt (adapting his own bestselling novel) could scarcely have predicted. This has been a weird year for movies, and while there have been enough fantastic ones that we absolutely shouldn’t cancel the Oscars, thank you, we haven’t gotten as balanced a diet as we may have ordinarily. The films that have been released have been mostly horror films, indie dramas, and documentaries, and while that’s more than fine by me (it is, after all, pretty much my beat), I have found myself missing the empty calories of a normal moviegoing year: the superhero movies, the period fluff, the upper-middlebrow studio comedies vying for unlikely award glory. It is this latter category into which French Exit falls. This is not an especially remarkable film, but it’s a nice film, and, in 2020, that’s not nothing.

Actually, I take that back: Michelle Pfeiffer is truly remarkable here. Following a decade or two in “older actress” purgatory, Pfeiffer has here emerged in her final form. As Frances Price, Pfeiffer owns this film, flouncing into every scene with a drink and a cigarette like she owns the place. It’s not quite a fish-out-of-water performance; rather, Frances has the air of a fish that long ago decided that water was beneath her, but also reserves withering contempt for land. The script offers her a veritable smorgasbord of one-liners, and Pfeiffer devours them as if she hasn’t eaten in weeks. Like Hannibal Lector or Anton Chigurh, Frances Smith is the sort of character who looms large enough that she dominates even scenes in which she does not appear. Pfeiffer was nominated for three Oscars between the ages of 30 and 34; now, at 62, she very well may win one.

The rest of the cast, as in most films with heavily stylized dialogue, is something of a mixed bag. Least effective is probably Hedges, who makes the tactical error of attempting to read his lines as they might be spoken by a human being. The characters on display aren’t humans, not really, but rather something closer to Edward Gorey cartoon characters brought to life. Apart from Pfeiffer, Mahaffey has the best handle on this fact. Her character, who dubs herself “Madam Reynard” even though she too is a Manhattanite expat, is an oddball among oddballs, a willful eccentric who attempts to manifest a friendship with Frances by sheer force of will and personality (one senses that Frances would have rebuffed her in a previous life, but at this point is so beyond caring that she invites her in as a de facto roomie). The rest of the cast is largely game, particularly Poots and De Bankolé, both of whom are well versed in the cockeyed territory.

French Exit is the sort of film they don’t make much of anymore, save for maybe Woody Allen, whose filmmaking days are clearly numbered one way or the other (another point of reference is obviously Wes Anderson, though Jacobs is playing a decidedly less idiosyncratic game; it will be interesting to compare once Anderson’s own “French” film finally sees release). Part of me, however, wonders if it may be a portent of things to come. 2020 has been a disastrous year for Hollywood, largely because it’s business model has for the past few decades hinged on gargantuan blockbusters which require massive opening weekend ticket sales to turn a profit. Things won’t always be like they are now, but I wouldn’t be at all surprised if the studios start hedging their bets with more modest, mid-budget films which can feasibly be released to VOD and enjoyed at home. French Exit is not a perfect film, but it’s pretty close to perfect within those parameters. It’s a chance to get out of the house without actually leaving, to visit some sumptuous locales and spend some time with some fantastically entertaining people (as well as Small Frank, who truly is a very good cat; this is easily the best Michelle-Pfeiffer-and-a-cat film since Batman Returns). It’s just exceedingly pleasant, and in an exceedingly unpleasant year, I appreciated it.

Part of the 58th Annual New York Film Festival – click here to catch up on the Hassle’s full coverage!