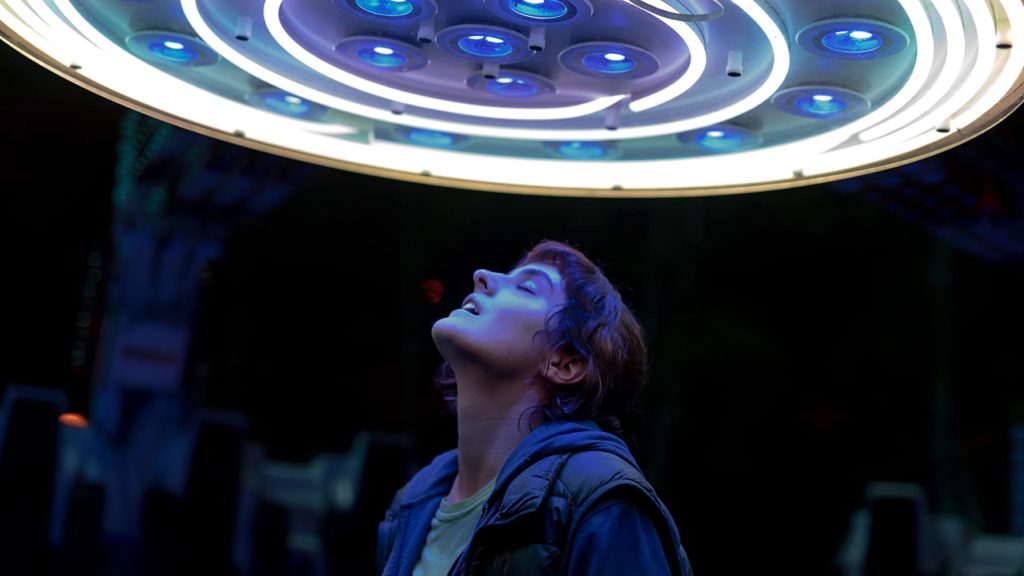 Where to even begin?

Only a few months after Adèle Haenel faced a mind-controlling jacket in Deerskin, her Portrait of a Lady on Fire co-star Noémie Merlant plays a young woman who falls in love with a tilt-a-whirl at a carnival. French comedies are really out there. Jumbo, the first feature from director Zoé Wittock, is ultimately a story of loneliness and mother-daughter troubles, even though it very much does feature Merlant “riding” a tilt-a-whirl.

A young woman named Jeanne (Merlant) works at an amusement park and spends her lonely days watching people enjoy the rides without her. She lives with her outrageous mother, Margarettte (Emmanuelle Bercot), who berates her constantly while drinking and smoking up a storm. One day, the park installs a shiny new ride, a tilt-a-whirl affectionately referred to as “Jumbo.” Jeanne finds herself drawn to the ride, compelled to speak with it after the park is closed. Shockingly, the ride seems to respond with ‘his’ flashing lights, and a strange new relationship begins. It involves a lot of oil.

Your mileage may vary, but I found Jumbo to be a fun, sad story about desire, heartbreak, and finding who you are. Merlant is as stunning here as she was in Portrait – selling the vulnerability of Jeanne and her ecstasy when she begins wooing Jumbo. Bercot plays over-the-top, but the relationship between mother and daughter has some truth to it. Margarette wants the best for Jeanne, but simply does not understand her or make much effort. The male characters are mostly disposable, potentially on purpose to make Jumbo seem the fetching suitor he is.

If you’re looking for a double feature with the ladies of Portrait, Deerskin and Jumbo back to back would be a true thrill. Just open your mind to the possibility that jackets can kill, and carnival rides can get married.

Viewed as part of Nightstream, a virtual festival I think we could call a rousing success!

DISPATCHES FROM NEWFEST: Roundup Part I