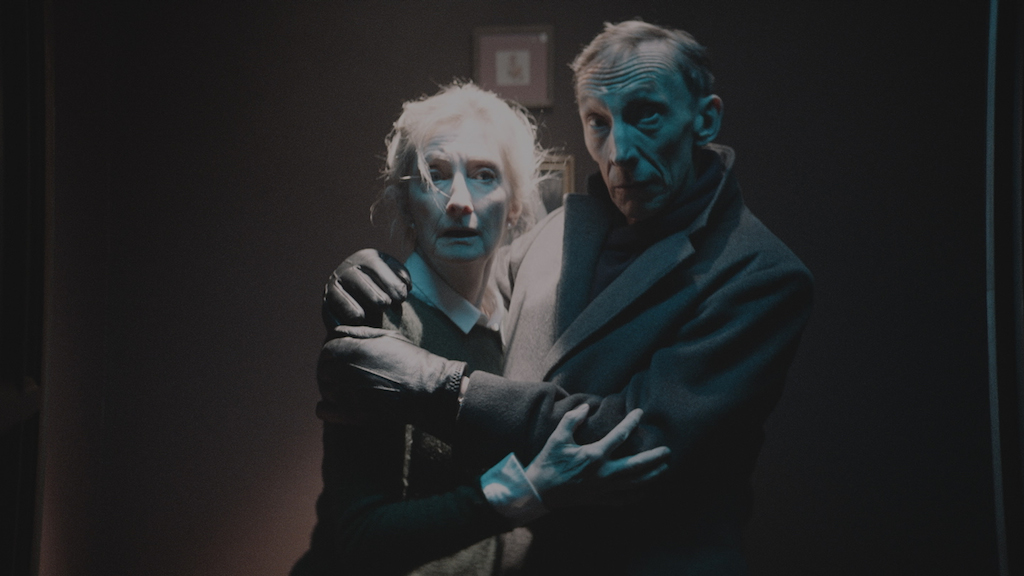 Horror comedies have always been a tricky genre. A good horror comedy needs to be funny, obviously, but it also needs to take the horror element at least a little seriously– at least if they want to avoid turning into a Scary Movie-style schtickfest. Yet they also can’t be too scary, lest the audience become too ashen to laugh. One of the best ways to make up for this potential dissonance is worldbuilding: by creating an internally consistent mythology, filmmakers are free to craft their own tone, with equal parts carnage and comedy. Recent favorites like Extra Ordinary, What We Do in the Shadows (both the original film and the outstanding TV adaptation), and The Man Who Killed Hitler and Then the Bigfoot succeed by making their own rules, creating truly likable characters and setting them loose in a world you can almost believe in. Anything for Jackson isn’t quite a tonal match for those films– it’s a darker, more caustic beast that leans closer to genuine horror– but it shares a surprisingly complex inner logic, and characters you almost want to root for.

Anything for Jackson opens on Henry and Audrey Walsh (Julian Richings and Sheila McCarthy) puttering around their kitchen and playfully bickering like any old married couple. Then Audrey’s watch beeps, and the two casually walk out the door and abduct a pregnant woman off the street. When she awakes, the Walshes explain to her that they have no intention to hurt her; it’s just that they need to use her womb as a vessel to resurrect their late grandson, Jackson. Henry and Audrey, it seems, have been so consumed by grief that they have turned to the dark arts, joining a local Satanic coven and procuring an ancient, Necronomicon-like grimoire. They’ve done their homework (Audrey reanimates a dead crow in the backyard with all the glee of a senior setting up her Facebook), and the fact that their captive, Shannon (Konstantina Mantelos), can see Jackson’s spirit casually playing in her bedroom seems promising. But ancient tomes can be tough on the pronunciation: following the ritual, the Walshes find themselves plagued with ghosts (of both people from their lives and apparent strangers), and visitors to the house begin cheerfully committing suicide (and subsequently becoming ghosts themselves). Realizing that these middle class squares may not be the master necromancers they thought they were, the Walshes turn to a coven-mate, withdrawn metalhead Ian (Josh Cruddas), for help– all while clinging to the hope that the thing growing inside Shannon is, in fact, Jackson, and not… something worse.

Anything for Jackson is a deceptively ambitious little film. Despite taking place almost entirely inside a modestly upscale suburban Canadian home, it manages to simultaneously be a kidnapping film, a ghost story, an apocalyptic tale of demonic possession and infestation, and a study of family grief– all while remaining fun, funny, and engaging. Credit must be given first and foremost to Richings and McCarthy. As Dr. and Mrs. Walsh, the pair come off as anyone’s sixtysomething parents, friendly and slightly daft but ultimately down to earth, even as they paint pentagrams on the floor in blood and utter occult incantations. One gets the impression that these are a completely normal couple who were sent down one internet rabbit hole too many, yet retain their salt-of-the-earth good humor. Imagine if Ma & Pa Kettle starred in House of the Devil, and you’ve got a pretty good idea of the territory.

Credit is also due to director Justin G. Dyck and writer Keith Cooper for keeping the plates spinning*. Anything for Jackson is so packed with ideas that it easily could have gotten itself bogged down in the details, or back itself into a narrative dead end (see: Story, American Horror). Like the films mentioned above, they avoid these pitfalls by moving along at a brisk pace, matter-of-factly introducing new elements that naturally extend from the ones previously established. I was particularly taken with the ghosts inhabiting the Walshes’ house, each vividly enough sketched to easily understand with zero exposition (especially memorable is a writhing suicide victim played by “Twisty” Troy James, the scene-stealing contortionist from Scary Stories to Tell in the Dark and TV’s Channel Zero). The Walshes live in a world of dramatic hauntings and suburban Satanists, but one can easily imagine it existing within our own. This is a fully self-contained story, but I could easily imagine it being spun into a cockeyed, indie version of the Conjuring cinematic universe.

Of course, all of this could have proven to be empty, cartoonish chaos if not for the beating heart at the center of the film. Henry and Audrey may be ridiculous, and they may do some truly awful things, but the heartbreak they feel over their loss is real. In a couple of quieter moments, both Henry and Audrey let their guards down long enough to explain to Shannon the pain that brought them to this point, and Richings and McCarthy sell it so well that it’s hard not to empathize. To be clear, I’m not advocating for kidnapping anyone for the purposes of a Satanic blood-ritual, but listening to Henry and Audrey, it’s hard to say you wouldn’t in their shoes, you know?

Anything for Jackson isn’t a flawless movie; there are moments when the story feels overpacked into its lean 97-minute running time, and a couple of plot points don’t quite pass the no-fucking-way sniff test. But the whole film carries on with so much invention and breakneck energy that it’s difficult to care. Anything for Jackson is a wonderfully clever, gleefully perverse black comedy packed with enough ideas and well-sketched characters for five movies. Covering four consecutive, overlapping virtual film festivals can be exhausting, so it’s nice to see the sort of smart, bonkers horror comedy that got me into movies in the first place. Like the best of the genre, it makes me want to visit its world again soon.

* – A cursory IMDb scan reveals that, of the 30+ films Dyck and Cooper have collaborated on over the past six years, this is the only one that is not a family-friendly made-for-TV romantic comedy. Either Anything for Jackson represents a dramatic departure for the pair, or I need to start keeping closer tabs on the Hallmark Channel.

US premiere at the Nightstream Virtual Film Festival – click here for schedule and ticket info!