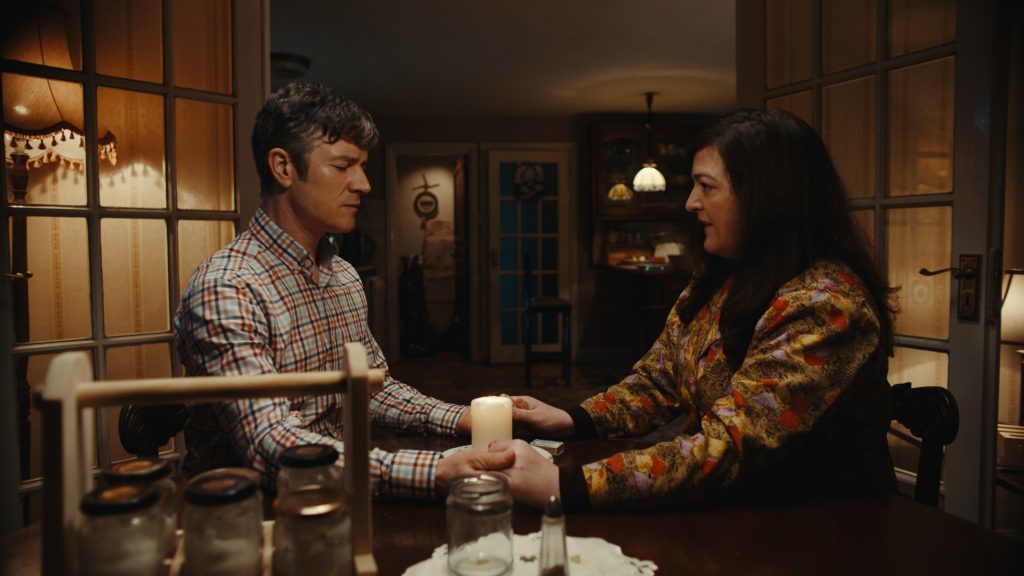 As any longtime reader of the Hassle’s film section will know, few events are nearer or dearer to our hearts than the Boston Underground Film Festival (or BUFF). Each spring, the festival touches down with a slew of bonkers new feature films, shorts, and rediscoveries, and the section comes alive with reviews and analysis. So when BUFF announced they were launching a brand new mini-fest for the October season (the wonderfully named “Buffoween”), it was obviously cause for celebration in these quarters. The timing was also fortuitous for me, personally: my girlfriend, a professional knitter, happened to be away for the weekend at the country’s largest sheep and wool festival, and having a film festival to cover is the perfect way to keep me from simply floating around our apartment like Vincent Price in a Roger Corman/Edgar Allen Poe film. So, for the next four days, keep an eye on this space for my daily reports on this blitzkrieg of creepy offerings.

The opening night selection was Extra Ordinary, a new comedy co-presented by the Boston Irish Film Festival. As BUFF artistic director Kevin Monahan mentioned in his introduction, they had actually tried to get Extra Ordinary into this year’s lineup for BUFF proper, and its absence their was, in part, the impetus for this mid-year series. I went into the film knowing next to nothing about it, but I could quickly see how it could inspire such an ambitious project: it is, simply put, completely fucking delightful.

Irish comedian and writer Maeve Higgins stars as Rose Dooley, a kind, socially awkward driving instructor who happens to be able to communicate with the dead. Her father, Vincent, was a celebrity ghosthunter with a series of In Search Of-style VHS tapes about the unexplained, and Rose served as his partner in exorcism as a child. Following Vincent’s untimely death (for which it’s implied early on that Rose is at least partly responsible), Rose has vowed to put her “talents” behind her, trying to make a living teaching teenagers how to drive a stick. She’s tricked out of retirement, however, by one Martin Martin (Barry Ward), a meek single father whose late wife refuses to stop nagging him from beyond the grave (“An ex-wife-orcism,” as Rose puts it). Rose is still unsure whether she wants to return to her old ways when Martin’s daughter, Sarah, falls under the spell of washed-up American pop star Christian Winter (a hilariously hammy Will Forte), who intends to sacrifice her to his Dark Lord to resuscitate his career. Soon, Rose and Martin form an ad hoc ghostbusting duo in attempt to collect enough ectoplasm to save Sarah’s soul.

With the possible exception of One Cut of the Dead, Extra Ordinary is the most full-stop charming horror comedy I’ve seen in ages. From start to finish, the film exudes warmth and friendliness while never once feeling cloying. Much of this is thanks to the cast. Higgins is a refreshingly unconventional presence, grounding the film in a humanity that’s less “I’m getting too old for this shit” than “I’d rather sit on a yoga ball and eat yogurt than talk to anyone, much less a ghost.” Her performance walks a fine line– deadpan while never detached, sarcastic yet totally lovable. The supporting cast, too, is completely game; Forte brings his well-honed bombastic presence, while Ward gets to engage in multi-character gymnastics as he allows himself to be inhabited by the ghosts of assorted small-town eccentrics. Even the smaller roles, like Terri Chandler as Rose’s heavily pregnant sister or Claudia O’Doherty as Christian’s disinterested Aussie girlfriend, are fully realized and winningly portrayed. Each character is the sort of character you can’t wait to get a line.

Yet, while Extra Ordinary’s primary goal is obviously comedy, it takes its little world seriously. As in Peter Jackson’s The Frighteners (to which the plot bears slight resemblance), it’s clear that directors Mike Ahern and Edna Loughman have given thought to the rules of their ghosts and gifted individuals (much of which is made clear in hilarious, VHS-fuzzy clips of the late Vincent). It would be easy for a film this unabashedly silly to feel like a lark, but these are real characters living in a fully believable world, and by the end, you’ll be completely invested.

This is not to say that Extra Ordinary isn’t silly; unlike Shaun of the Dead, another film to which it will inevitably be compared, you never get the sense that these characters are in any real danger, and there are moments where less patient viewers might feel that some of the comic business could be tightened up in interest of the plot. But, personally, none of this mattered to me watching it. Extra Ordinary is simply a delight, a warm, funny, and even romantic movie about low-key busters of ghosts. Like the spirits Rose faces, it’s not trying to scare you– it just wants to say hi.

Buffoween runs from Thursday, 10/17 through Sunday, 10/20 at the Somerville Theatre. For full schedule and ticket info, visit BUFF’s official website.