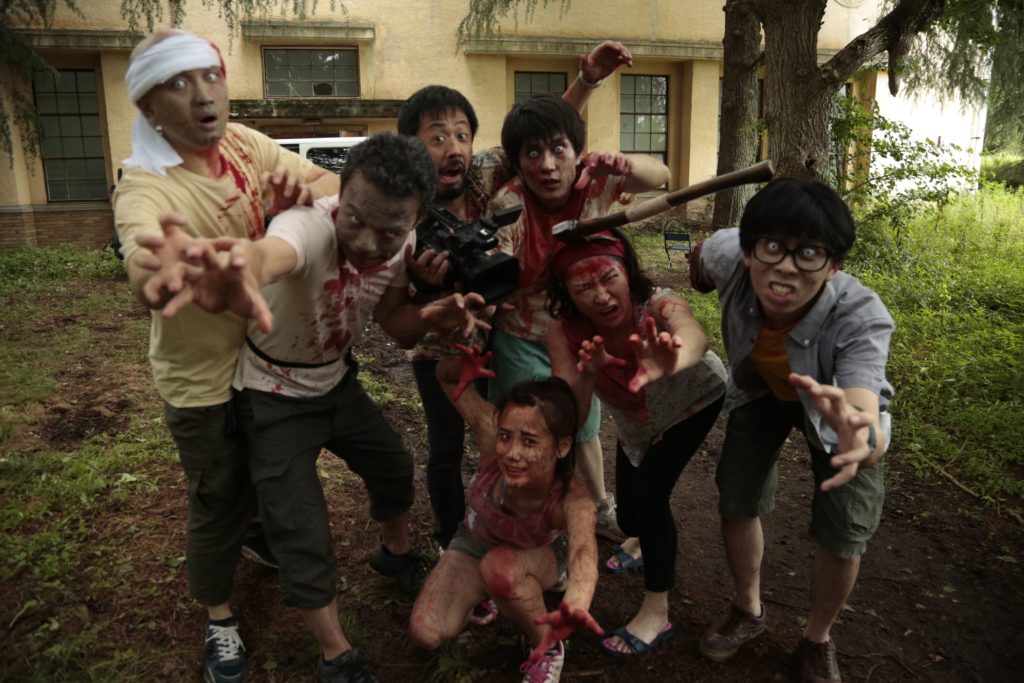 It’s the hackiest of cliches, and I’m sorry I can’t think of a better way to start this, but the zombie film, for all intents and purposes, is dead. At least for now.

It is with this in mind that I’m pleased to report that the new Japanese zom-com One Cut of the Dead, which makes its one-night-only premiere tonight at the Brattle (along with other independent cinemas across the country) before landing on horror-boutique streaming service Shudder sometime next month, is the absolute best kind of modern zombie movie. I’ll apologize in advance if my review comes off as opaque, as it’s the sort of film that should be approached as blindly as possible (again, the goal here is the surprise). But trust me when I say you’re gonna like this one. 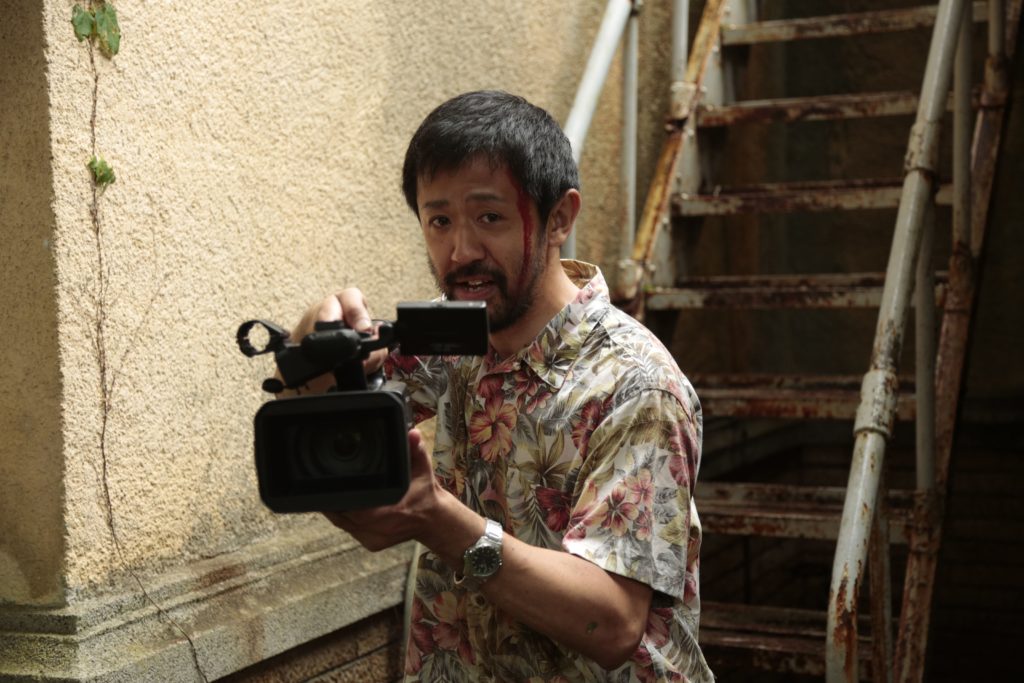 The One Cut of the title refers to the fact that the film’s first forty minutes or so consist of one bravura, uninterrupted tracking shot (curiously, Chinese director Bi Gan pulled off a similar trick in the second half of this year’s Long Day’s Journey Into Night, a film which could otherwise scarcely be more different from this one). The film opens on a young woman being attacked by a zombie, only for the camera to pull back; what we’re seeing is actually the shooting of a zero-budget zombie movie-within-a-movie, helmed by a megalomaniacal director (Takayuki Hamatsu) who insists his cast give him “real fear” (cheekily, the first line of dialogue spoken is “And, cut!”). As the crew takes five before a grueling forty-third take, the makeup designer (Harumi Shuhama) fills the leads in on a secret: the water filtration plant serving as their backlot was supposedly the site of an actual zombie outbreak some years earlier, and an urban legend contends that the dead can be called back again with the right ritual. You can probably guess what follows, as the situation gets more and more out of hand (and the director becomes more and more gleeful in our protagonists’ reactions). And then… the camera cuts, and things… change.

That’s about as far as I can go without spoiling this film’s ample charms, but suffice to say that One Cut of the Dead is not what it seems, or even really what I just spent a paragraph describing. That first cut is disorienting at first (coming, as it does, nearly halfway through the movie), but once you find your footing, you’ll be delighted by possibly the funniest, and certainly the warmest, zombie comedy since Shaun of the Dead (not for nothing has Edgar Wright been singing its praises). One of the most frustrating things about being a critic in the current media landscape is tiptoeing around plot points to placate the spoiler-averse. This is a little different, because I don’t want to spoil the surprises before you see the film, but I do want to convince you to see it. So let’s see if we can go at this sideways and get the point across. 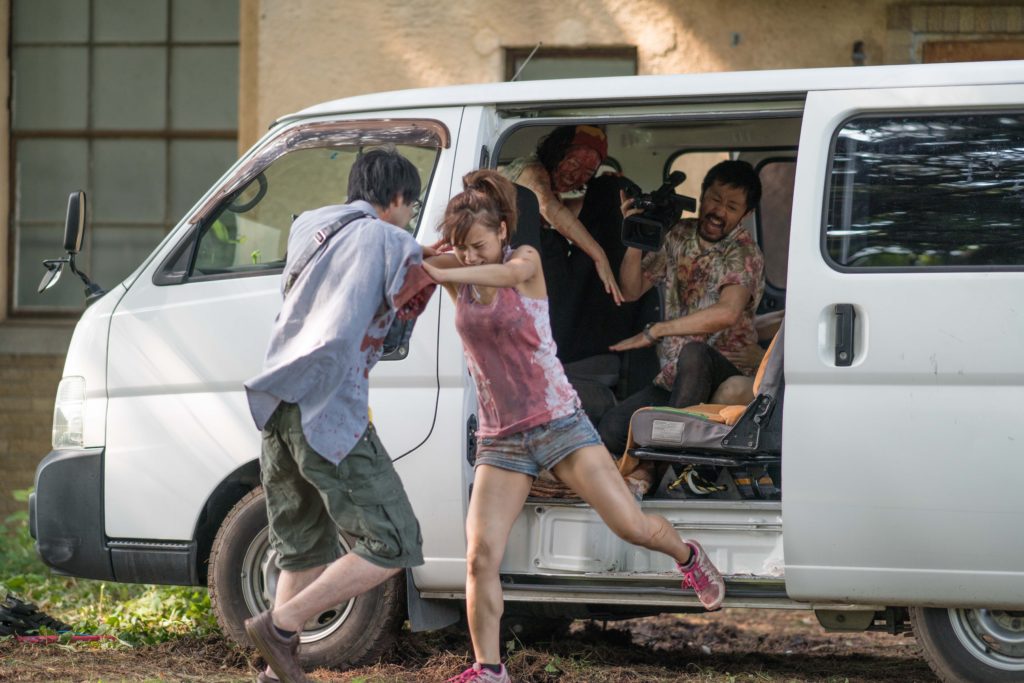 To start with, Hamatsu turns in a brilliantly nuanced performance as the film’s director, bringing both manic energy and, eventually, an infectious enthusiasm for his ill-fated zombie movie. Through both halves of the movie, One Cut captures the triumphs, hardships, and outright madness of zero-budget genre filmmaking better than perhaps any film since The Blair Witch Project (as an occasional shoestring director myself, I found myself cringing with recognition). To be sure, the film’s actual director, Shinichiro Ueda, has more resources at his disposal than his fictional stand-in, but he’s clearly been there, and treats his characters with affection (even as they become increasingly soaked in blood). And one really can’t say enough about the effortlessness of the delivery, both in that astounding single take (which, it must be said, contains no obvious cheats) and in the expansion that comes afterward. The entire thing feels a bit like a magic trick, and once it ends, you’re going to want to watch it again to see what you missed.

And… that’s pretty much all I can say. Maybe once the film’s been out for a while I’ll return to it to discuss some of my favorite bits, but even then I’d hate to deprive a latecomer of the chance to see it with fresh eyes. So if I’ve built up any goodwill in this space over the years, I’d love it if you just take my word for it and see One Cut of the Dead tonight without reading another word about it. Even if you’re sick to death of zombie movies, even if you could never stand found footage in the first place, and even if you don’t like horror movies period, I think you’ll be pleased with what One Cut has in store, and the delightful way it upends everything you think you know about it. To put a spin on a classic horror tagline: It’s exactly not what you think it is.