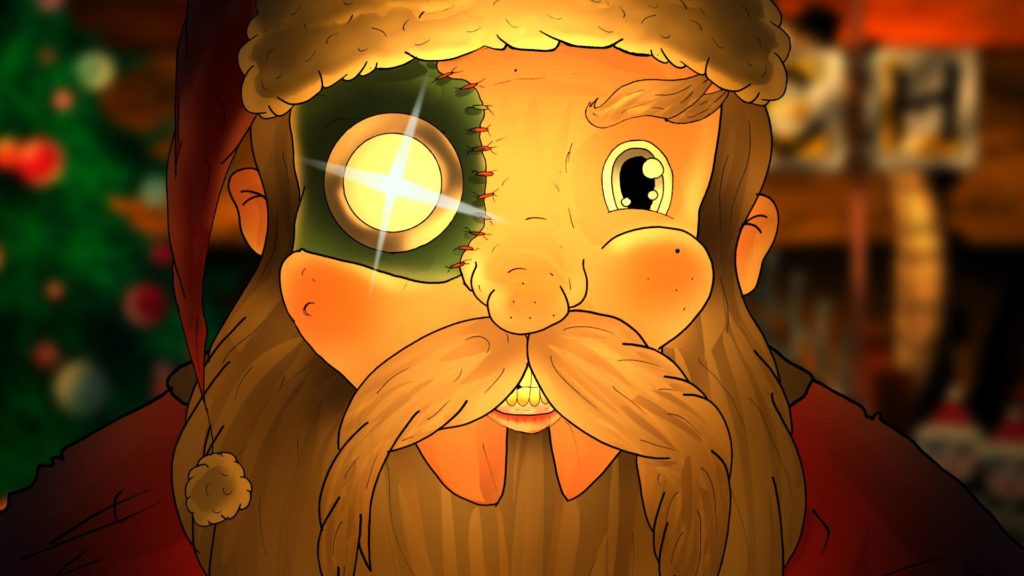 The holidays may be over, but there’s never a bad time for a good bit of Yuletide counterprogramming. To that end, the Hassle is proud to co-present the Boston Sci-Fi Film Festival’s Friday late-night screening of Michael Neel’s Infinite Santa 8000, a gleefully demented animated feature about a distinctly dystopian Santa Claus. In anticipation of tomorrow’s screening– which will feature a live Q&A with the filmmaker, moderated by yours truly– we spoke to director and animator Michael Neel about his career, the challenges of creating an independent animated feature film, and the true meaning of Christmas.

BOSTON HASSLE: To start out with, why don’t you tell me a little bit about yourself and your background, and how you came to make Infinite Santa 8000?

MICHAEL NEEL: Sure. I graduated from Vassar in 1999 with a degree in film. And I kind of figured I’d be going to LA, you know, or New York. But I grew up in Watertown, and I ended up staying in the Boston area, and kind of fell into production. It turns out that there’s a lot of production around here– maybe a little more specialized sometimes, and sometimes you’ll end up finding jobs that kind of spread out your skills a little bit. So I started getting jobs doing cinematography, editing, and some other various things. I ended up meeting up with another filmmaker named Greg Ansin, and we started doing work together. We did a documentary together called Growing Old. We did a horror film after that, called Drive-In Horror Show. And when I say “we,” I directed, he produced, we both wrote, but essentially we both did it together. And while we were waiting for Drive-In Horror Show to get distributed back in 2010, we decided to do a web series. And I’d animated in college– I’d done my senior project in stop motion, which was nuts. And actually I swore at the time that I’d never do animation again– and flash forward eleven years, and I’m talking with another filmmaker about animating! So we decided to do a web series, and we just kind of stumbled into the content. You know, we wanted to do something with Christmas, something with horror. And it ended up turning into this funny little thing. We just discovered the process as we went along. It just was very fortuitous. You know, part of it was planned. We had great artists. Greg and I animated, and it just kind of happened. Sometimes projects just do that. It’s kind of cool when they just take on a life of their own.

BH: For people who aren’t familiar, what is Infinite Santa about?

MN: It has one of the more colorful, or memorable elevator pitches: A cyborg Santa Claus fighting mutants and robots in the year 8000, in a vast, post-apocalyptic wasteland to save the Christmas spirit. It’s easily one of the strangest things we’ve ever thought of. As an independent film, we just kind of do anything, so an idea that ridiculous can just happen.

BH: Friday’s screening is being billed as the world premiere of a remastered, re-edited version. Could you talk a little bit about that?

MN: Sure. When we made the film, Greg and I animated, and we had a small team– a very dedicated team working on it for a couple of years, and our deadline was approaching. This was back in 2013, the film was being picked up by the same label that did our horror film. We were trying to just push through production and all that stuff, and there were a few scenes we just had to cut. There was one that was just a character-building scene for the villain, that we hated to cut, because it added a lot of depth to the character, but you could still understand the story without it. And it was going to be a ton of work– it was like three minutes long, which in animation is a ton of time. So we had to cut it. And we cut an action scene, which was a duel, hand-to-hand combat– it was very difficult, very time-consuming. And then another just kind of atmosphere kind of scene that was also going to be challenging. So we made our deadline, we got the version finished, and then off it went, out into the world. But we always in the back of our mind wanted to make the truer version of the film, that followed the script and what we had recorded and storyboarded. So soon after, I animated those extra scenes, and since then that director’s cut has just kind of been growing, kind of gestating a little bit. And we were also lucky because we were able to finally show off the surround mix that we had done when the film was first finished, which for a variety of reasons we ended up not releasing. We knew how much it rocked in surround, and we’ve always wanted to share it. So when this opportunity came up to put a director’s cut together, we really jumped at that opportunity.

And the other thing we were able to do was to go back and retouch– or I guess remaster is probably a good term– sixty or so shots that were totally fine, but when you make a film with over 2000 shots and only two people animating, you have to at some point be like “Well, I could work on details on those two characters laughing for another two hours, or get another shot done.” And when you have a gigantic list, you have to inevitably get to the point where you move on. So there were sixty-ish shots that fell into that category, stuff that I would watch in the theatrical version, and I’m sure no one else would notice, but for me, it’d be like “Aw, I wish I had another couple hours with that, and really polished it.” So this new version gave us that opportunity, and it really makes me happy.

BH: You’ve alluded to some of the challenges that come with doing an independent animated feature. If there’s anyone reading this who is an aspiring animator themselves, do you have any tips or advice?

MN: Oh, sure. The first one is, in any project, surround yourself with talented people, that have different talents than you do. I’m an animator, but I don’t draw. So I use a program called After Effects, where you can take art– any art– and manipulate it, and tell a computer when a movement starts and stops, and stuff like that. So it speeds up the process. What we did, is we hired these unbelievable artists to do all of our raw art for us. So they’d give us all the layers in PhotoShop for the characters, and we’d animate it. So what I would say to someone who wants to animate is, if you can draw, awesome. Jump in, make mistakes. But, every artist has limitations. Like I said, mine and Greg’s are artistic– our drawing skills are not very good. So, if an aspiring animator, if that’s a roadblock they have, then reach out to other people and just be smart about how you get everything put together. And don’t be afraid to just mess around and see what you can do. You know, you’re not gonna break the computer. We discovered this whole thing by accident, pretty much. Don’t be afraid to do that.

And also, storyboard everything. Absolutely everything. Because, you know, there’s so much time from the initial characters, to the design, to figuring out what direction they’re facing, and if you go through all that work, and then you realize that your character’s facing backwards instead of forwards, then, well, you’re kind of screwed! So it never hurts to be really, really prepared for animation, because it takes so long to do something that flies by in the film. We have some shots that took days to do, and they’d be on screen for twenty frames, which is less than a second.

And the other thing, too, is take your time. I mean, it’s not like when I was back in school in the ‘90s, when there was no outlet for this kind of stuff that you could achieve on your own. There were kind of gatekeepers, people who’d let the world see this. And that’s not really the case now. You know, with Youtube, Facebook, Instagram, whatever, you can do anything, but the trick is getting it seen. But that doesn’t mean you can’t finish it, it doesn’t mean you can’t get an audience. It’s worth it just to finish something. That counts for a lot, and no one can take that away from you. So that’s what I would say.

BH: One final question. There have been a lot of debates lately around Die Hard and Gremlins, so just to set the record straight right off the bat: Is Infinite Santa 8000 a Christmas movie?

MN: Yes, actually. Yes, it is. Santa is still Santa. He’s not the kind of hyper, killer Santa, like the robot Santa from Futurama, or Santa’s Slay. And I should say, I love those movies. I love killer Santa movies. I actually wanted to push it in a pretty hardcore direction, and Greg was the one who pushed for making Santa more lovable and Santa-like. And I think it actually works better, because he grounds you in this crazy, post-apocalyptic, ultra-violent world, because he’s a cyborg, he’s programmed to be good, and all this stuff. So yes, this is a Christmas movie, for sure. And it has a pretty large heart in it that surprises a lot of people. We’ve had many reviews that have said that they were shocked at how much heart the film has. Because, you know, with a title and description like that, it sounds ridiculous and violent and crazy. And it is, but it still has a lot of the Christmas spirit in there too. So yes, it’s absolutely a Christmas movie. And for what it’s worth, I actually think those two films you mentioned are also Christmas movies. So that’s just my verdict on it.