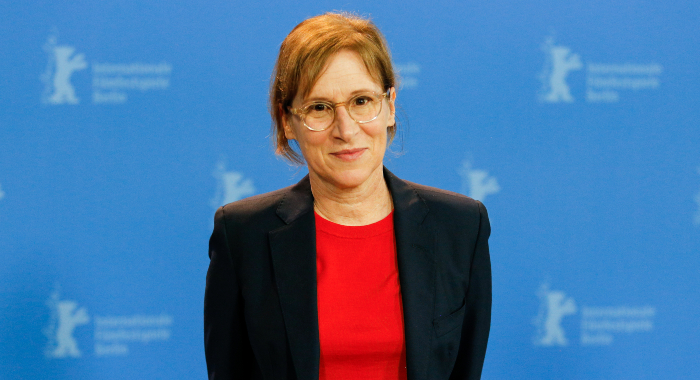 I met up with Kelly Reichardt this week to discuss her latest wonderful feature film, First Cow. We discussed adapting a novel, working with animals, and alternating between past and present.

Boston Hassle: First off, I just want to confirm something: was Alia Shawkat’s dog in the first scene named Lucy?

Kelly Reichdart: No. (Laughs) There’s only one Lucy.

BH: That’s what I figured. I want to ask about Evie the cow and working with animals.

KR: She was well cared for. She’s a very sweet cow. But it’s funny, nobody ever asks about the owl. The owl is huge, claws like a dog’s paw. Big, big owl. The owl was supposed to stay up in the tree and then fly down to its trainer, but the owl stayed up in the tree because there were maybe some eagles in the area. It was a really cool moment because life takes over. We just filmed it up in the tree for a long time.

But Evie, she’s a beautiful jersey cow who came from Washington, I believe. They had been working with her so she’d be used to people. It’s nice having an animal on a set. It’s like having a big dog, everyone can go over and talk to Evie. When we actually shoot a scene, it’s like the crew has been trained. We all have to really slow down and work with the cow, in a different mode.

With Lucy (the dog) in Old Joy, she just wanted to be included. She was having the time of her life. Working with animals really keeps actors in the moment and present – they’re responding to this live creature. Talking really did help John [Magaro] and Evie.

BH: That was something that struck me while watching the film – there’s a moment where Cookie goes up to the cow and says “Hello darling,” just being so kind.

BH: How did Jonathan Raymond’s original novel [The Half Life] inform First Cow? I know the novel takes place over a much longer period of time.

KR: It weaves in and out of the 1980s and the 1800s, and they go to China, and there’s no cow in the novel. The film allowed us to take things from Jon’s novel while still having room to expand on the story in a certain span of time where I could get in and do my thing. King Lu is a fusion of two characters from The Half Life. All the themes of the natural world and the beginning of capitalism are in the novel. Really, the depth that comes with the screenplay is from Jon’s novel and there’s room to branch out from there.

BH: Was Cookie from Boston in the book too?

BH: You mentioned the beginning of capitalism and how it informs the plot of the film.

KR: Capitalism in that sense meant the start of the beaver trade. The capitalist crime in the movie is this basket of milk being stolen, but what’s happening is people are moving to the territory and they’re going to wipe out indigenous people and the beaver trade. The story plays with American mythology – and this is true of many of my films – the mythology that you can pull yourself up by your bootstraps if you just have an idea and gumption. The only way for King Lu and Cookie to get to that is to commit this theft.

BH: Have you read the book Once They Were Hats by Frances Backhouse? It’s more about the Canadian beaver trade but still ties into the Oregon Territory.

KR: A Brit named John McLaughlin went to Vancouver first to start the beaver trade and then came down to Oregon – that would have been a good book to read before we made the movie.

BH: Did you set out to make First Cow deliberately very different from your last period piece, Meek’s Cutoff?

KR: I was more worried about First Cow being different from Old Joy, since I was shooting in the forest in the Pacific Northwest. It was about taking a different approach. I was giving everyone this book of Fredrick Remington’s paintings – the greens are really yellow and blue and kind of muddy, and that was our color spirit guide for the production designer, the costume designer, the color timer, everyone. The way it’s shot is quite different from Old Joy. It’s so different from Meek’s Cutoff that I didn’t worry about that. Those were oxen, and this is a cow. That’s very different.

BH: How did you approach the pacing? Old Joy is so meditative, but First Cow has plenty of action.

KR: It’s whatever the story calls for. It’s 1820, so you don’t work with time like it’s ‘now.’ There are moments of action. The story is your guide for that.

BH: Do you think you prefer working in the past compared to a present day thing? Do you like going back and forth?

KR: A period piece is great because the research is so fun, but I’m ready to be in contemporary times for a while. The thing about contemporary times is dealing with technology – a lot of filmmakers are battling with that. What’s less interesting than watching someone on a phone or on the computer?

First Cow opens at Kendall Square Cinema and Coolidge Corner Theater this Friday, 3/13– watch this space for the Hassle’s review!