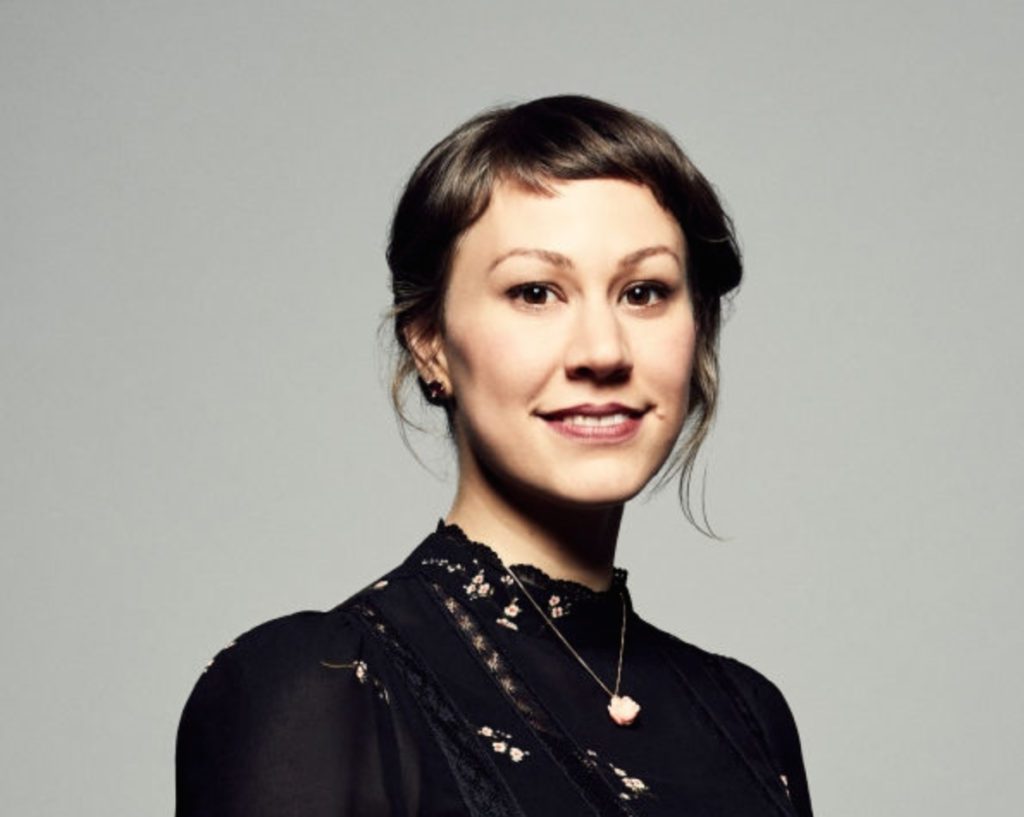 FIRE OF LOVE, a documentary about volcanologists Katia and Maurice Krafft, is an exquisite exploration of the outward and inward relationships that people have to the things they love and how they share that. It comes as no surprise that director Sara Dosa holds the same kindness towards the Kraffts, her filmmaking team, and those who helped share this story to the big screen. As FIRE OF LOVE screens at the Coolidge Corner Theatre and Kendall Square Cinema, I spoke with Dosa for a few moments about her stumbling into “the greatest lava-fueled love story ever told.”

BOSTON HASSLE: How did you first hear about the Kraffts?

SARA DOSA:  I first learned about Katia and Maurice (Krafft) when I was researching for the last film I directed, which was a documentary called The Seer and the Unseen. It follows the story of an Icelandic woman who communicates with spirits in nature. In that film, we wanted some archival footage of erupting volcanoes to help tell the story of when humans first came to Iceland about a thousand years ago. We thought that archival footage could making it appear older and ancient even though (laughs) there weren’t cameras around that time. We started researching archival footage of erupting volcanoes in Iceland, and that’s when we learned that there was a French couple that shot beautiful footage of volcanoes all around the world, including Iceland. We didn’t end up using their footage for The Seer but we were intrigued and thought that their story could be a fascinating adventure one day.

BH: How were you able to get the footage? Is it privately owned?

SD: After Katia and Maurice passed away, their collected materials had changed hands over the years. But Bertrand Krafft, Maurice’s older brother, was the primary steward of their collection. A few years ago, he entrusted it to an archival house called Image’Est in Nancy, France. Our producer, Ina Fichman, called them to negotiate a deal that required Bertrand’s approval. Luckily, he was very excited about our approach and gave us access. We worked with Image’Est to scan the footage. There were about 180-200 hours of 60mm footage and thousands of photographs that Katia and Maurice both shot. They scanned it beautifully in tranches at about 20 hours at a time and sent it over the Internet. It happened during the pandemic and we couldn’t travel to France, so it was actually a wonderful way to continue working at a time of isolation.

BH: The film is beautiful, which I know has to do a lot with your guidance and editing process. I also felt like the Kraffts had an eye for good shots. I was wondering what most of their footage looked like.

SD: My editors, Erin Casper and Jocelyn Chaput, and I watched everything, which was such a treat. The vast majority of the footage was of volcanic landscapes. A lot of it was erupting volcanoes and lava flows but also gas, hardened lava, lava domes — things that were parts of systems of volcanism without necessarily being erupting volcanoes. We were fascinated because we know they had to carry their celluloid with them, which was heavy, and ration it. Definitely not like digital cameras! They had to be really specific about what they filmed. There were things that weren’t volcanoes; they were fewer and far between, but they were images that were meaningful to them in some way, which delighted us. There was Katia wearing giant sunglasses and looking towards the sun on repeat and a mysterious woman’s hand holding up food for a raven to grab. There were a few minutes of a Komodo dragon eating a dead animal. They signified the life around the volcano. We had so many questions about these, and no matter how much research we did — and we did a ton of research, (like) interviewing their friends, colleagues, Bertrand — to get to know them behind the footage and the books (they wrote), there are still questions about why they shot certain things. But we ended up embracing them as part of our storytelling style to point out the questions and all that we could never quite know. 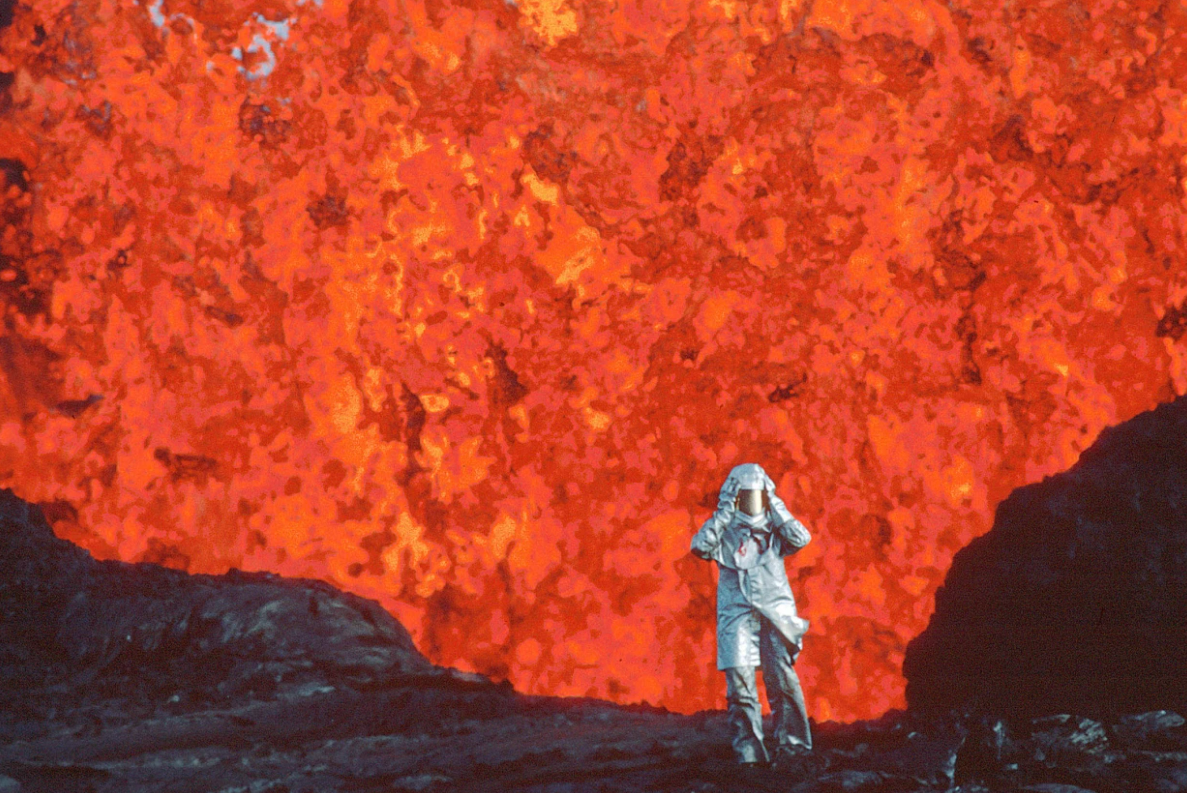 BH: I think the other beautiful portion of the film is the narration. Did you write that first?

SD: Very early on, we wanted the film to be a love story and specifically a love triangle. Every creative instinct that we had in the film originated from Katia and Maurice. Even though they passed away thirty years ago, we always saw them as our guides every step of the way. In one of the books Maurice wrote, he had a line that said, “For me, Katia, and volcanoes, it is a love story.” With that, we thought, “Oh, wow, he’s talking about his life as a love triangle with his partner and volcanoes.” That really sparked the inspiration for how we built the narrative. However, the narration was very challenging. We wanted Katia and Maurice’s voices but there was not enough material. There was no visual imagery that spoke to their love story, even though it was very true for all of their friends and colleagues. There were no audio recordings of them talking about their personalities or their personal life. In order to tell a love story that was character-driven, we needed a different narrative vehicle, which became narration (voiced by filmmaker Miranda July).

The writing process is always a dance between editing and writing. At first, the narration was very expository and plot-driven. But then we pulled it back and wanted a voice that prompts questions (more) than declare factual information. We wanted the narrator to be curious and searching in the same way Katia and Maurice were curious and searching, and to be upfront about the fact that we didn’t have the answers like in their epic search, all the while knowing that they can never fully understand the vast majesty that are volcanic forces. We hoped that our writing process would mirror theirs. It was a lot of writing more, taking away, and testing things out to find the right balance to hopefully where our writing didn’t get in the way of experiencing their story, visually and auditorily.

BH: Conceptually, I feel like I know what the volcanoes are about. But when I saw this film, I was like, “Oh my God, volcanoes are really dangerous.” Was there a scene that you look back on and think “Whoa, that was crazy” or find aesthetically pleasing? Or a scene that makes you think about their journey?

SD: There are so many scenes that I think about that really transformed my relationship to volcanoes. One of the first sets of footage that I watched was their reels from Hawaii in 1984. They had these gorgeous close-up shots of lava: slowly moving, bubbling, sizzling, and dripping into the ocean. I immediately, “Wow, how alive, utterly monstrous, and gorgeous.” But you can feel their love permeate through the lens. To me, I felt like they were saying that volcanoes are sentient and intelligent and have autonomy outside of humans. On the opposite side, too, there’s also seeing footage of Mount St. Helens, which is a completely different type of volcano. It’s explosive, and that eruption (in 1980) was thought to be 25,000 times the energy release of the bomb dropped in Hiroshima. It’s an extraordinarily strong force, and seeing that mountaintop explode and seeing all of these trees look like matchsticks from above because the pine needles were completely incinerated — now I’m getting excited.

That was such a profound power, like I could not fathom what I was looking at. Understanding the creative power from the ones in Hawaii that show this beguiling beautiful lava to this powerful, destructive force. For a lack of a better expression, it blew my mind. The planet is alive and creative and destructive, which is something you can intellectually know. But there’s something about visually seeing it, and especially having Katia and Maurice be the illustrators of that vision.