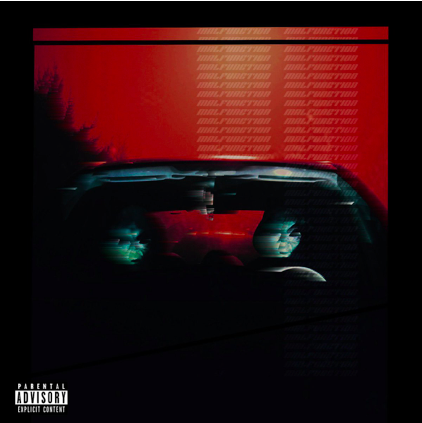 The Ill Addicts have come a long way from the juvenile nature (but still fire) of 2015’s “Cake,” a song that thrived on quintessential rap jargon and ProSwervez’s chipmunk vocal inflections while riding atop a Target shopping cart (such a New England thing to do). At that point in time, Boston rap was still trying to find its oft-overlooked identity as a regional entity in the 2010s, and Ill Addicts intentionally became a part of that process.

The group’s newest album Malfunction is a surprise left turn into darker soundscapes courtesy of ProSwervez’ shivering 808s and flamboyant synthesizers. There’s never a moment where the album doesn’t feel like a cinematic experience in IMAX.

The greatest example of grandeur comes in the form of Malfunction’s opener, “Cobra Freestyle ’97.” The track’s initial orchestration sounds like a meteorological space odyssey set in a distant stratosphere. Juelz and ProSwervez trade taunting bars aimed at their haters as the synths transition from ethereal swirls to jagged punctures.

Even at their most lyrically-desolate, the Ill Addicts can skillfully conquer a studio session with the moodiness of Brockhampton’s Iridescence. “Crazy After All” features an acid-house aesthetic that coalesces perfectly with the group’s drunken absurdities. Each member attempts to sound sane as they’re flooring the pedal in their newly-purchased cars “Riding in a Ford Taurus, watch me floor it…this Julio got be distorted”.

The natural ebullience of past projects is supplanted by the frigidness of Boston’s narrow streets. Things turn from quietly eerie to vehemently urgent in a matter of two songs. “Anthrax” contains paranoia and cynicism amidst the ales of capitalism (“I’m never checking the mail/Anthrax peaking trying to send me to hell/White powder leaking, I don’t care about the smell”). Accompanied by a visually distressing video, the album’s centerpiece finds Ill Addicts at their most visceral. You can see their transition from frivolous adolescents to introspective 20-soemthing year-olds right before our eyes.

Songs such as “Anthrax” prove to be great examples of ProSwervez’ slightly caustic vocal melodies. There’s always a hint of menace percolating from his choruses, whether it be on past tracks like “Ahora,” or more recent ones like the ominous finale “Hello (Thought U Were Dead).” Even “Bernie” (which may reference our beloved socialist) is desolate in tone thanks to what sounds like a distorted frog noise. The group sounds rightfully disinterested with anything outside of their clique. It’s just about finding success together.

As Malfunction progresses, each member’s voice gets drowned in effects to produce a feeling of uneasiness and daunting stupor. The buzzing synths and heavily-vocoded conclusion suggests very little catharsis, which is probably the last thing you’d expect from a group as effervescent as Ill Addicts. It’s such a far cry from past epilogues, you wonder if everything is okay. There’s a lot of talk about being alone as a viral state of depression continues to fester in the mind. Considering the apocalyptic state we’re currently living in; I can’t really blame them.