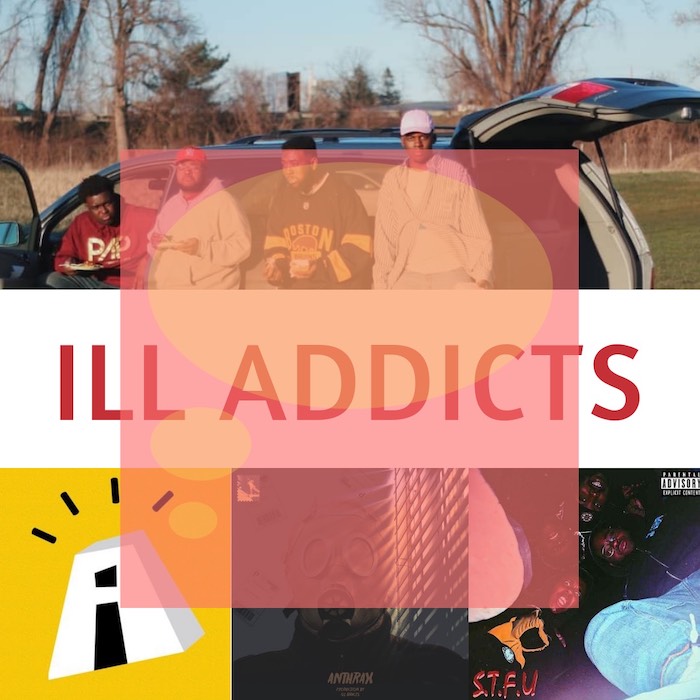 For me, this story begins in a dirt patch in Somerville at the Hassle’s own New England Underground Music Fest last June. This was the first time I saw the Ill Addicts perform and I was immediately hooked by their unique approach to hip hop, seldom found in the Boston scene. Part art rap, part old school hip hop, the Ill Addicts spike their verses with a trap ethic wielded with cynical political versage. They are loud, in your face, and while being brought up in the school of late 2000’s and early 2010’s hip-hop, they have their sights set on Boston as a starting point for their catalogue.

I met the Ill Addicts at the Labyrinthian, island-esque peninsula of Umass Boston for an interview with the majority of their collective on a gray Friday afternoon in April. The campus that afternoon held a reverberating silence, and as I waited for the Ill Addicts to arrive, I walked between valleys of buildings and pillars upholding buildings, taking notes every few steps.

After waiting until around 4:20 for them to meet me in the campus center, they arrived, Dochee, Juelz, Proswervez and Zay (SK and Frank couldn’t make it). Proswervez who is on a semester (or two) off from Umass Boston led us through the corridors of the campus until we settled in the massive, and almost completely empty cafeteria at the school. In torrents of jests (mostly by Dochee), I got to know the Ill Addicts as a dynamic collective with a wide open vision of hip hop that is as abrasive as it is objectively embracing against the coldness of a Boston landscape, a city dotted with ‘prestigious’ ‘institutions’ and presidential libraries and monuments.

Consequently what I learned over the course of the interview and after is that they are a family, a group of driven friends dedicated to music and dedicated to Boston as their home. While primarily influenced by Odd Future, A$AP Mob, Wu Tang and Awful Records, these early 20 something’s are, as I’ve suggested previously, blazing their own trails regardless of the disparate, often inaccessible musical landscape of Boston.

While still riding high off their release Tidal, right now they are just trying to vibe and make amazing art.

‘We know our potential’ asserts Pro.

And while the Ill Addicts didn’t necessarily obscure the interview process they instead worked to lay their personalities bare and divert the process as joking coworkers at another day of the office.

But this isn’t the office nor is it a class assignment, it’s sometimes fatted, sometimes warlike, sometimes exuberant ‘life’ where making interesting music is equal parts luck and skill. But, to the point, what makes the music so interesting? First, it doesn’t sound that forced nor polished, meaning that you no longer need a recording studio to make a great song or album, certainly the Ill Addicts don’t. Secondarily, the lyrics and subject matter seem to laced with venom.

If you are unfamiliar with their catalogue, to me, there remains a callousness to social norms and industry norms in their message which rolls at the intersection of numerous different kinds of genres. This is rap music elevated and fit for a new massive generation avidly consuming as they are disillusioned and politically disturbed.

This and many more facets of social rhetoric and polemic appear in their music because ultimately, as Proswervez suggests, ‘we’re ourselves.’

Take the song YSL, that refers to Yves Saint Laurent, but also uses an accordion sample that begs a delivered hook.

‘I’ll tell yo make any kind beat.’ Juelz starts, ‘He’ll make it or try to emulate it in his own way, that’s why it sounds so different, but so familiar at the same time….’

‘When we plan, it gets hard. When we go out it’s easy‘

They met in May 2014 in high school junior year wanted to take a trip then turned into a music thing by chance. Speaking critically, they have a lot to learn and are, in the very least, aware of this and as a collective, self aware, almost unbreakably so. And that in itself is a rarity. They are also refreshingly honest about this fact. ‘We’re cool not cool, funny, not funny, Social, not social.’ Dochee explains at the beginning. This almost sounds corny if it wasn’t so true.

Perhaps a longer meditation on the politicization of and in music, specifically with rap artists, is necessary, but the Ill Addicts ought to make other rappers and writers alike start scratching their heads and rethinking their approach.

Chris Hues //// is a poet, human & writer from Boston, Ma & music editor of bostonhassle.com. //// They can be reached at [email protected] or @crsjh_ via instagram & twitter.