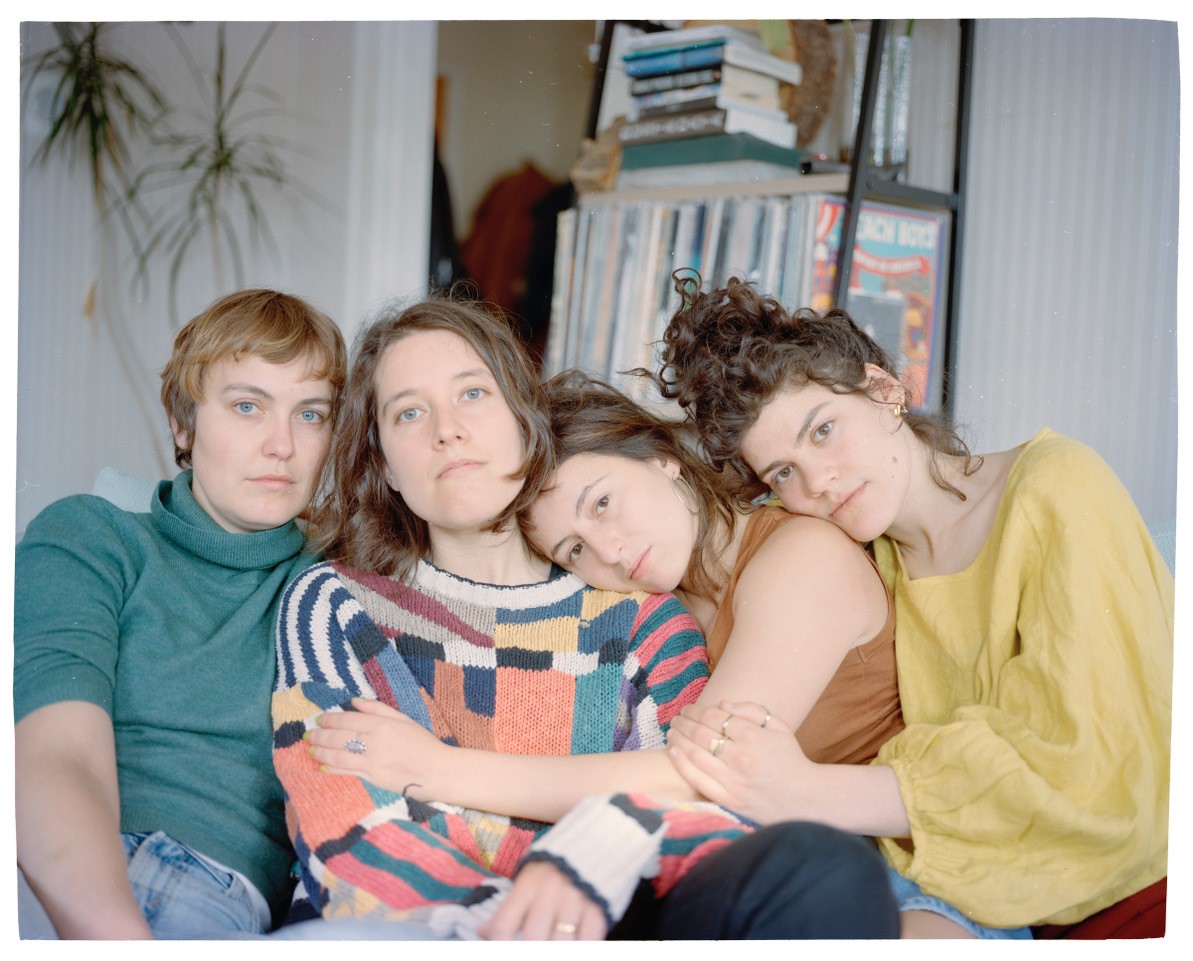 In many ways, sidebody is a collection of shared things: shared notes, all vibrating within the same space; shared songs, sometimes written in front of a live audience; a shared home, Somerville, Mass.

sidebody introduced themselves by singing. Cara Giaimo, Hava Horowitz, Martha Schnee and Lena Warnke start their shows and practices by “tuning,” an exercise borrowed from Esperanza Spalding. It’s an invitation to “find a note and go along with it and with breath” until its natural end.

“It really became a way to sort of ground and center before we play,” Schnee said.

The result is a meditative mixture of sound, as though the bandmates collected notes from the atmosphere and somehow distilled them into physical reality. The different notes settle into one another, not matching, but cohesive—sharing space.

The band uses an effectively similar sound on their self-titled debut album sidebody, which was released on Aug. 4. Eclectic harmonies and stripped-down production give the record a personal feel by creating intimacy with the audience and making it easy to hear each bandmate’s voice.

“You can kind of just hear how they’re put together,” she said. “All the parts are pretty understandable and even simple, but the way that they’re layered makes something interesting {…} You can see and hear and feel all the moving parts. There’s no trickery. There’s not a ton of post production. It’s all really what was happening in that moment.”

The bandmates arrived at our interview wearing name tags on their coordinating denim shirts. A different song title from the band’s album was written on each name tag: “atonement,” “coward,” “pebble,” and “up/down.” It was, they explained, a way to try out the idea of dressing up as a song: something they may invite audiences to do in the future.

“We’re also interested in interacting with folks,” Schnee said, “so at our recent shows, we’ve been {tuning} and then beginning the song, so the people in the room are also part of the song.”

The band takes a unique approach to their songwriting, sometimes improvising unfinished songs in front of the audience.

“When we used to play shows, we would almost always at least have one song that was not done, so we would {…} let go of the expectation by really, truly not having a song written, and we would write it in that moment,” Schnee said.
sidebody embodies DIY, from their songwriting process to their origin story. 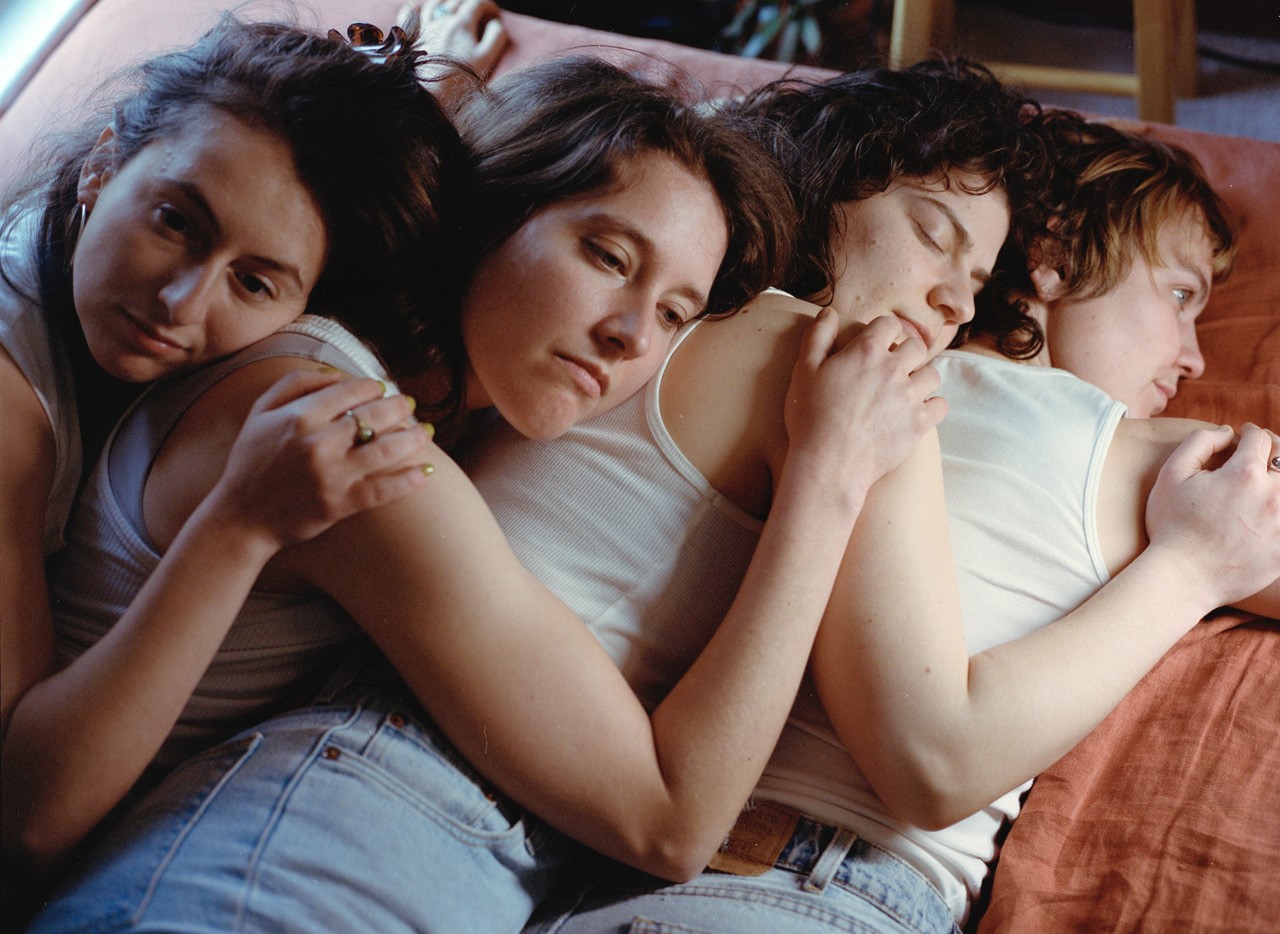 They were friends first. Three of the four bandmates—Horowitz, Schnee and Warnke—were part of Newton South High School’s Class of 2011.

In 2020, Schnee, Warnke and Horowitz formed a COVID pod around the ritual of playing music together once a week. They did so for about a year before playing a show in Giaimo’s basement; when the band needed a guitarist for a future show, Giaimo stepped in and soon joined the group.

In the year leading up to Giaimo’s addition, Schnee and Warnke learned to play the drums and the guitar, respectively. Horowitz played the guitar.

“This project was founded out of truly the deepest part of lockdown and finding a way to have fun in that moment,” Schnee said.

sidebody was experimental from its genesis; the bandmates themed their early practices as a way to switch up their quarantine sweatsuits. Their first practice, Schnee said, was wedding-themed. Other sessions were themed “cruise” and “first day of kindergarten.” That playful spirit would soon infuse their music and, later, their first record.
“There’s a part of it that is about being beyond just music {…} and being a web of friendship and healing and spell-casting and playing—not in the musical sense, but that’s often the output—and getting to spend time together,” Schnee said.

sidebody engages in a type of metaphorical gardening—tending their friendship and the art that it fruits. The bandmates are rooted deep in their Somerville community; they found their studio space by coming across a paper sign on the street. And they grow things. When the band writes songs, they start with “seeds”: germs of song ideas that a member might bring to a practice.

Most of sidebody’s songs were written within 30 minutes. Tracks emerge quickly from guitar riffs and melodies and poems and journal scraps.

There’s power in the project’s soft and loud elements: whispering, chanting, speaking and belting have equally important roles in the record.

“up/down” starts softer, building into strong choruses reminiscent of 90s punk, with the addition of striking harmonies and a strong bass line.

The slow, brooding verses in “atonement” give way to a deliciously uptempo chorus. It’s lively, headbang-y and theatrical. Each track has a distinct dynamic pattern. “blood,” recorded a cappella, evokes something ancient in its lyrics and harmonies (blood rich resolution / blood rich red rich day one”), and “show me your face” features rhythmic panting between the verse and the chorus.

“Throughout the two years we really learned to pare back—there’s strength in softness and quietness, and there’s strength in the really high energy, high octane—and I think the album does a pretty good job of capturing that range,” Horowitz said.

She said the song “pebble” was lyrically and structurally improvised.

“It changes each time, and it creates this feeling where you have to be fully present and fully listening,” Horowitz said.

The idea of presence seems integral to the band’s art.

“The pandemic made me really think about what it means to be where I am in a new way,” Warnke said. “I felt really grounded and rooted exactly where I am, and that, for me, had a big influence on the art that I want to make and the type of community I want to be in with my direct neighbors.”

The band played for an audience of 300 at Somerville’s PorchFest, an event where musicians in the community perform from their porches. In the past, sidebody has played at other local venues like The Midway Cafe, The Jungle, Cantab Lounge, and O’Brien’s Pub.

Beyond friendship and music, sidebody is a printing press. They published a zine called “ELFLAND” in 2022: “a communally made compilation of archival documents, photographs, essays and poems created by neighbors to tell the story of an empty lot used by the community as a public art space.”

During the pandemic, tiny model houses began to appear on the empty lot on the corner of School and Summer Streets that would soon become the site of a condo development. Neighbors began to add to the installation, and soon Elfland, complete with a Market Basket, a T station and a Citgo sign, looked like a tiny Somerville.

sidebody’s “ELFLAND” zine brought the community together to create an archive of the public art space, which has since been relocated.

The band named physical places as artistic and musical influences: Laurel and School Streets in Somerville and neighborhood landmarks along their walking routes.

“We’re all really invested in where we live,” Giaimo said, “so sort of finding this way to take this deep friendship and create things, whether that’s shows and albums, zines, a space that expands that friendship in order to welcome in other people who could then be a part of it in some way.”