And so we’ve made it to the end to the first annual Buffoween, the Boston Underground Film Festival’s abundantly welcome expansion into the spooky season (and again, for me, a warm respite from a weekend in solitary). Closing nights for film festivals can be as exciting as openings, and this was no exception, with two of my most anticipated genre festival favorites from the year. As I’ve noted, much of Buffoween’s selections have alternated between the winningly silly and the shockingly tense; both of Sunday’s selections effectively split the difference.

Sunday’s offerings began with the series’ only documentary, Blood and Flesh: The Reel Life and Ghastly Death of Al Adamson. A familiar name to historians of psychotronica (indeed, one of the talking heads is Psychotronic Encyclopedia of Film founder Michael Weldon), Adamson directed a string of notoriously threadbare, yet enticingly lurid, exploitation thrillers in the 1960s and ‘70s, with such colorful titles as Satan’s Sadists, Horror of the Blood Monsters, and Dracula vs. Frankenstein (absolutely no relation to Universal Studios save for a near-death Lon Chaney, Jr.). This alone would make Adamson a prime subject for documentary (particularly given the involvement of such unlikely collaborators as Russ Tamblyn and Academy Award-winning cinematographer Vilmos Szigmond), but Adamson unfortunately had a second act of sorts that propelled him to greater infamy: as the victim of a truly bizarre murder that exploded onto tabloids in the mid 1990s. 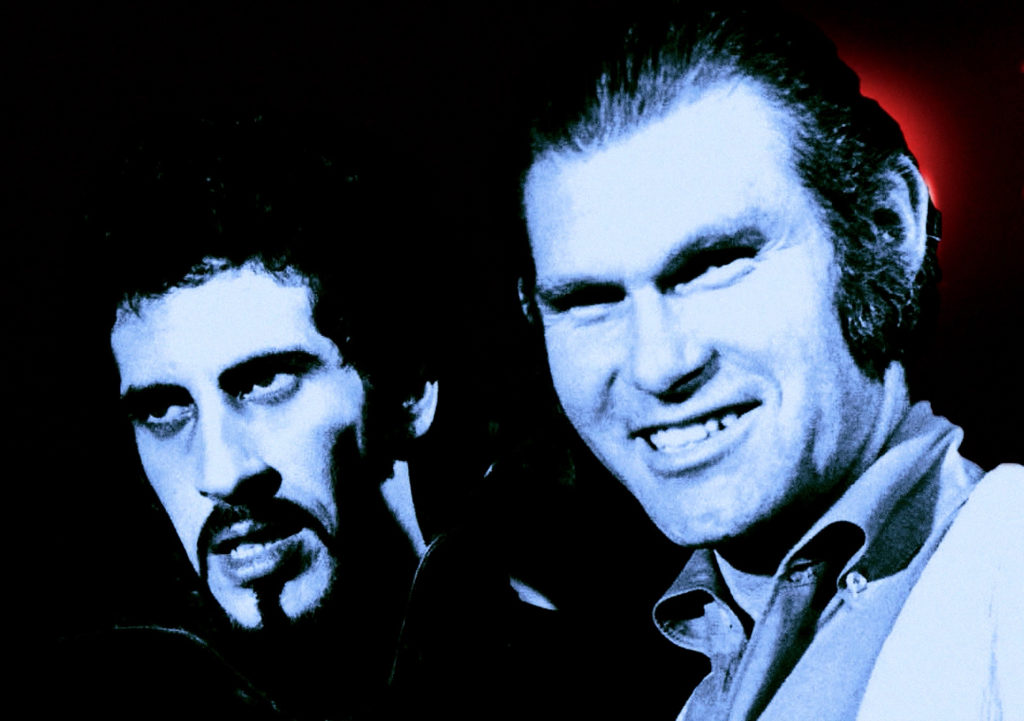 Adamson’s story is so bizarre that I’m honestly surprised it had yet to be documented on the big screen (he has been the subject of many hours of trashy TV; I can remember seeing his tale on E! True Hollywood Story while home sick from high school). By all accounts Adamson was a larger-than-life figure, marrying the infectious naivete of Ed Wood with the business savvy of Roger Corman or Herschell Gordon Lewis. One of the funniest parts of the movie (and most frustrating aspects of attempting to make one’s way through his filmography) is the way his films seemed to be in a constant state of flux, gaining and losing footage to latch onto new trends and being released and rereleased under a bevy of different titles; the domestic thriller Echo of Terror was injected with some dancing footage to become Psycho A-Go-Go, then given a sci-fi subplot and retitled The Fiend with the Electronic Brain, then further altered with additional gore footage and rereleased as Blood of Ghastly Horror. The presence of most of Adamson’s motley stock company (notably longtime producer/best friend Sam Sherman) provides invaluable insight, ensuring that even Adamson’s fans will find something new. I was fairly familiar with his work going in, but his late-in-life involvement in the UFO contactee movement was news to me; I personally could watch an entire documentary on this period in his life.

But, of course, any telling of Adamson’s life must eventually pivot to the truly bizarre circumstances surrounding his death. In some ways, I wish they delved into this area more fully; Adamson’s murderer, Fred Fulford, remains something of an enigma, and is introduced with an abruptness that seems to presume a certain familiarity with the case on the part of the viewer. But I also can’t deny this chapter’s power, particularly its interviews with Adamson’s beloved housekeeper, Guadalupe Garcia, who was the first to realize something was amiss. Adamson’s movies weren’t the best– many were barely even movies– but it’s clear from Blood and Flesh that he was loved, and left an impact on everyone he knew.

The closing selection for the inaugural Buffoween was Daniel Isn’t Real, currently the darling of the genre festival circuit and bound for an official release in December. I’m bound by embargo from getting too deep into this one until then (expect a full review closer to its proper release), but until then suffice to say: what a fucked up, intense little film.

The plot, in general parameters, will be familiar enough to anyone who grew up watching Drop Dead Fred: to cope with a traumatic childhood (and after witnessing a grisly police shootout), young Luke develops a relationship with an imaginary friend named Daniel– only to “lock him away” in a dollhouse once his influence begins to turn sinister. Years later, struggling with college life and caring for his mentally ill mother, Luke dusts off the dollhouse, only to find his imaginary friend has grown into a slick enabler played by Patrick Schwarzenegger (yes, of the T-800 Schwarzeneggers). In no time, Daniel ingratiates himself back into Luke’s life, serving as something of an invisible pick-up artist life coach for the socially awkward freshman. However, it quickly becomes apparent that Daniel’s influence extends beyond simple douchebaggery, and Luke soon finds himself struggling to maintain his sanity– if he hasn’t lost it already.

Daniel Isn’t Real is a slick, electric piece of nastiness, stylishly shot and inventively written. Nepotism aside, Schwarzenegger seems bound for stardom; lurking in the background of each shot with the smug confidence of someone convinced of their own godliness, it is as if his father’s ineffable charisma has somehow been transplanted into the reptilian frame of Withnail-era Richard E. Grant. It’s also undeniably timely, with Daniel serving as a physical manifestation of college-age toxic masculinity. That, along with occasional bouts of wincing violence, may make this a tough watch for some, but the film is so dizzyingly confident and entertaining that it never becomes too uncomfortable.

For information on future Boston Underground Film Festival screenings, visit their official website
To catch up with our coverage of the first three days of Buffoween, click here, here, and here