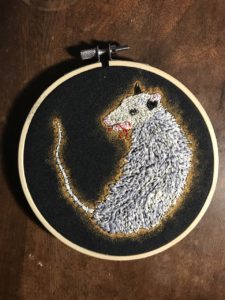 We are pumped for the Boston Hassle Flea on December 7th! It’s a great opportunity to get the community involved with local makers and to get the word out about all the incredible artists we work with. Check out the full list of vendors that will be there at this year’s flea here!

As part of our vendor highlight series, I had the incredible chance to chat with Zooey Kim (they/them). They’re an artist, a pet parent, and an amateur taxidermist from Providence, RI; always collecting ideas, always with a notebook. I found their work to be thoughtful and invigorating.

Boston Hassle: Zooey, thanks so much for taking the time to do this interview. Can you speak to your own experience as an Asian American and ways that concepts of belonging manifest themselves within diverse cultural communities?

I’m especially interested in your perspective as an Asian-American myself living and creating in New England. In what way do you see this take shape in your art?

Zooey: As a Korean-American with very little tying me directly to Korean culture, I spend a lot of time trying to define my place in America and in Asian America. There often isn’t a defined space for people like me: I’m a mixed-Korean queer kid with a majority-white family, and the Korean part of my family are adoptees who’ve been in the US their whole lives.

The experience of being marginalized is weird and complex! I think a lot about the idea of living on those margins, and how some things can actually thrive there. I think that’s why I’m so obsessed with “vermin;” we think of critters like mice and bugs as infestations, but they belong in our world just as much as we do, and often live complex and fascinating lives.

BH: What emotions or understandings do you want admirers of your art to take with them?

ZK: I think I would like my work to encourage thoughtfulness about how we think about the margins, for lack of a better term. I called my website “Rat Church,” partially because I think it’s funny, but also because I genuinely think rats are some of the coolest, kindest animals out there, and we dismiss them for being “dirty” and for going after our food & resources. But that’s just the result of them trying to survive in the world that we built, you know?

BH: That’s an intriguing interpretation – I love it. How do you think that is influenced by your personal relationship with nature? What kinds of scenes do you interact with in Rhode Island (or Boston)? What aspects of nature stimulate your art?

ZK: I think nature is cool as shit! I grew up in Providence and in Brooklyn, NY, so I’m especially interested in the way people interact with nature in urban spaces. No matter how industrialized a space is, you’ll still have whole ecosystems adapting and thriving right under your nose. But we rarely think about it! It’s part of what draws me to my work with animal remains, really — the average city-dweller will never get to interact with a mink or raccoon as closely as I will when I’m working with its bones and fur. I’m drawn to roadkill for this reason; I think it’s very telling of our relationship with nature that I’ve never seen a coyote alive in the wild, but I’ve definitely seen them dead on I-95. 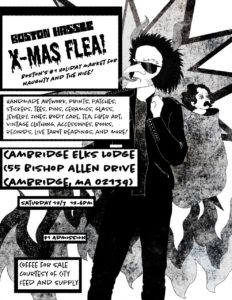 BH: What types of work can we expect at the Boston Hassle Flea? Where can we support you – follow you – love you even more?

ZK: I’ll be bringing a variety of work! I’ll have some embroidered originals and prints, some jewelry and other objects made with sustainably sourced animal remains, and a shit-ton of stickers. I’m on instagram @ratchurch.info and on the internet at ratchurch.info as well. And if you’re feeling extra nice, but don’t want to own any more physical nonsense to put in your house, i’m on ko-fi at ko-fi.com/zooeykim

BH: Is there anything else you want Hassle readers to know about you or your work?

ZK: I like to tell people about my sourcing for animal remains. Everything I use is sustainably sourced – I say “sustainable” instead of “ethical” because everyone’s ethics are different. But what that means for me is that nothing I use is killed for my purposes, and the critters I work with would otherwise be tossed or abandoned. I think of the work I do as almost a funeral practice; I try to honor each animal by giving it new life in my work.

A huge thank you, Zooey, for allowing us some insight into your world and your art. There’s nothing we love more at the Hassle than vermin supporting other vermin, so come kick it with the critter crowd on December 7th! 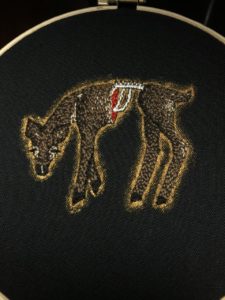