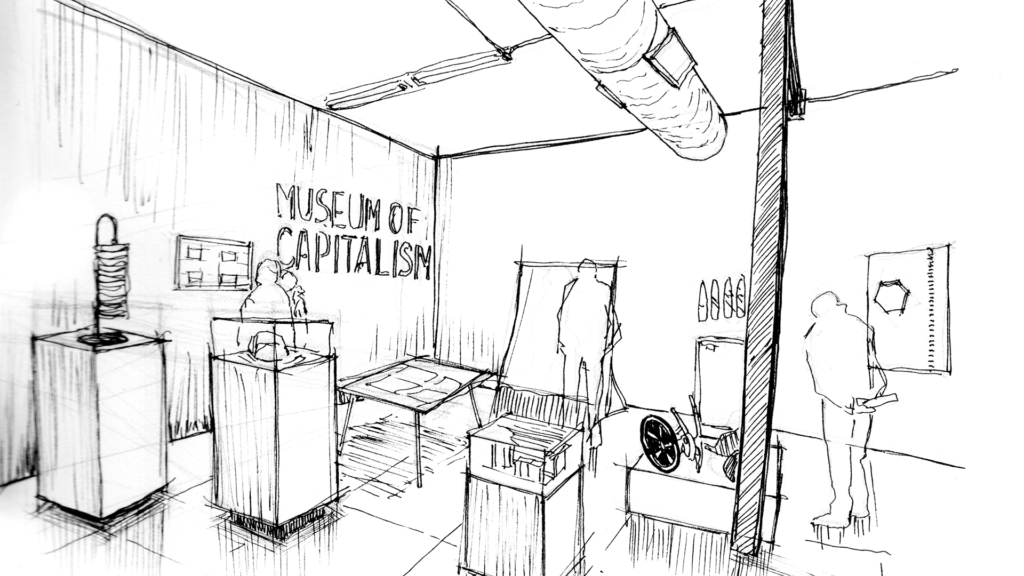 Growing up in Northern Virginia, every school trip was to Monticello or Mount Vernon where you would look at objects you had little connection to and people would unenthusiastically describe life in a different time. The cynic in many of us was sitting at these events wondering how reflective these were of actual life during those times and mostly waiting for it to be over. Eventually (as my mind would keep wandering out of boredom) I would usually find myself thinking about if the slate was wiped clean and history wasn’t kept, what would beings think of us based on what they found lying around?

The Museum of Capitalism show attempts to answer just that! A collection of contemporary art that documents our current capitalist society. The idea of a piece of art being a documentation of the time it was created instead of some sort of timeless expression of the artist is a relatively post modern thought, but it’s in it’s full glory in this exhibition. The pamphlet and introduction of the show use language to make this seem like a museum created by someone peering back at our time (in a bit of theatrical flair much like Damien Hirst’s “Treasure’s from the Wreck of the Unbelievable”) but my still cynical nature leads me to believe that technology isn’t available yet. Either way, it gives anyone viewing the show an automatic entry point on how to then start taking in these pieces. 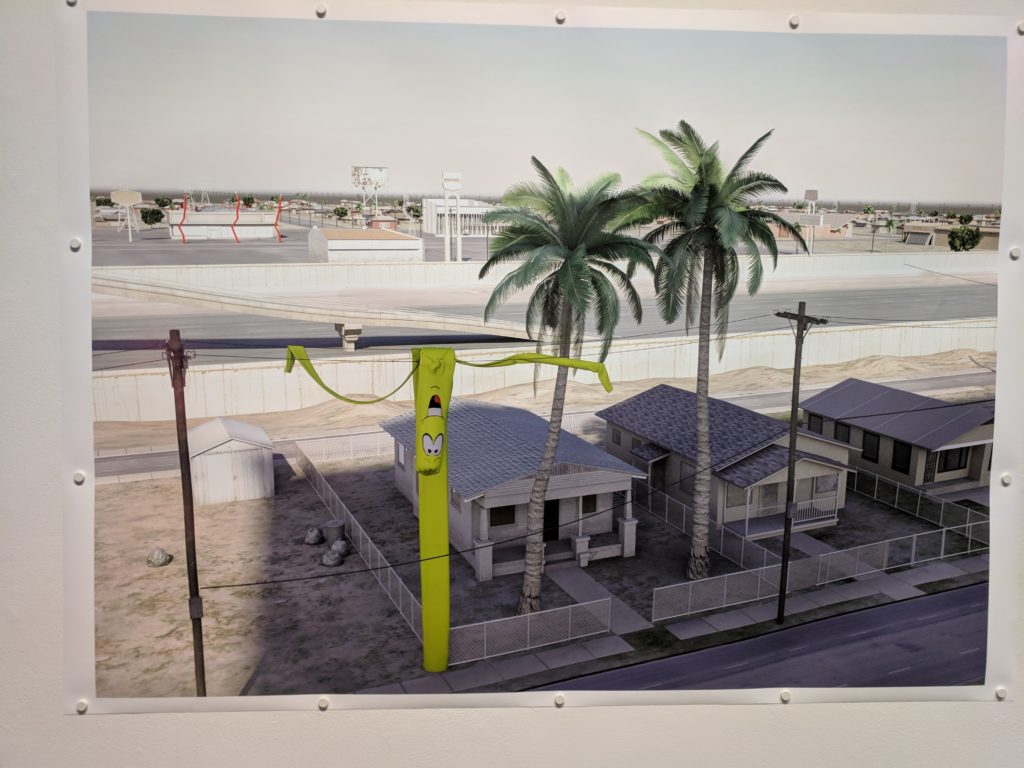 Tim Portlock created a series of prints based on computer generated images attempting to reflect the desolation and emptiness of San Bernadino, CA after the 2008 housing market collapse. It would be easy to show a large open space with an empty city-scape but he takes a more intimate approach showing houses that looked lived in but no one being around. Shades of Edward Hopper without even the one lonely person to keep you company. There are signs of humanity all around, trash overflowing, trimmed vegetation, relatively new objects but no one besides the viewer seems to be here. The picture above even includes the shadow of larger buildings from which this viewpoint appears to be originating adding to the feeling that there’s a larger world around it and that this is just a moment captured in an empty place. The smile of the dancing man (the one human-ish figure) being literally turned upside down is a nice touch. 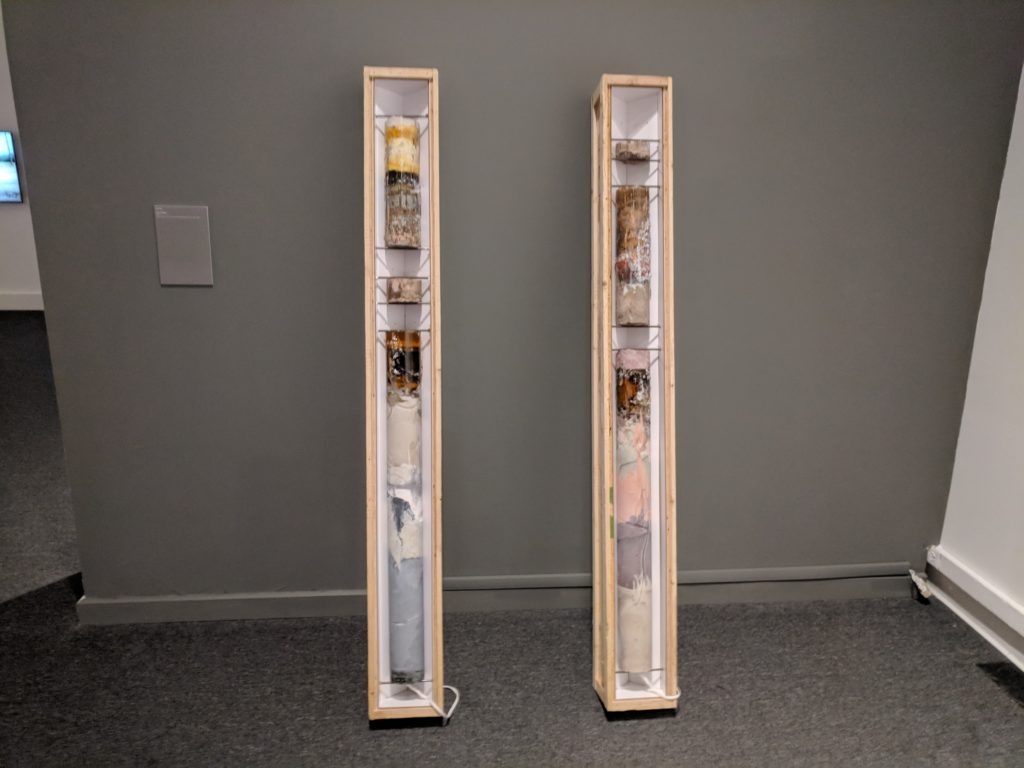 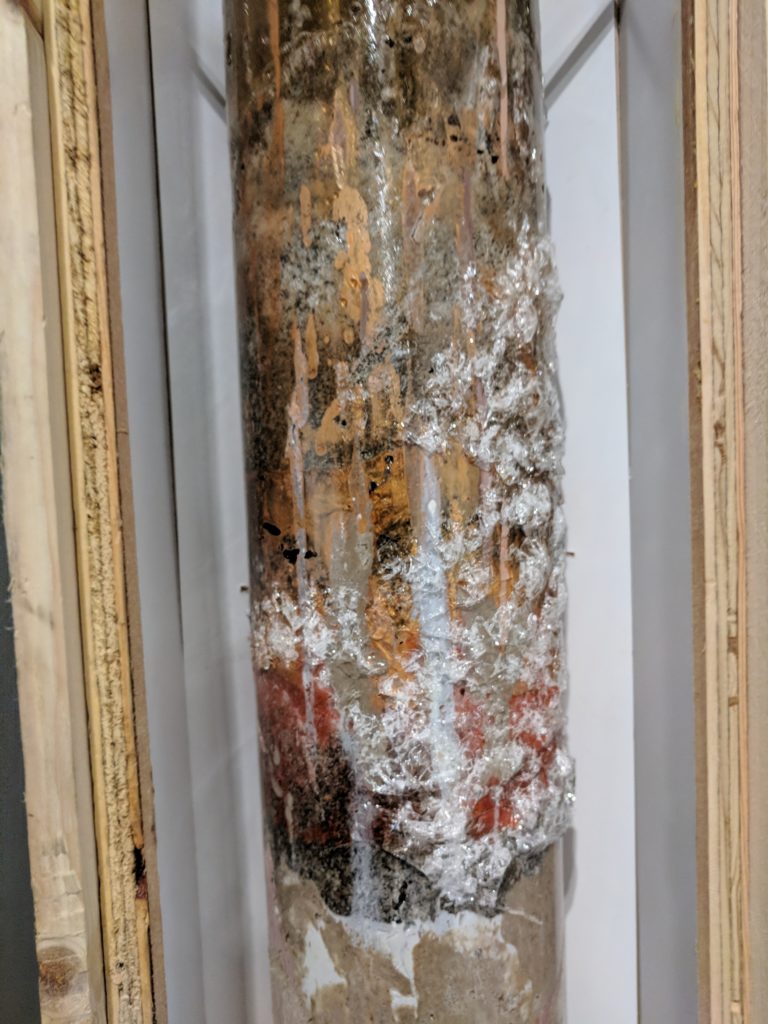 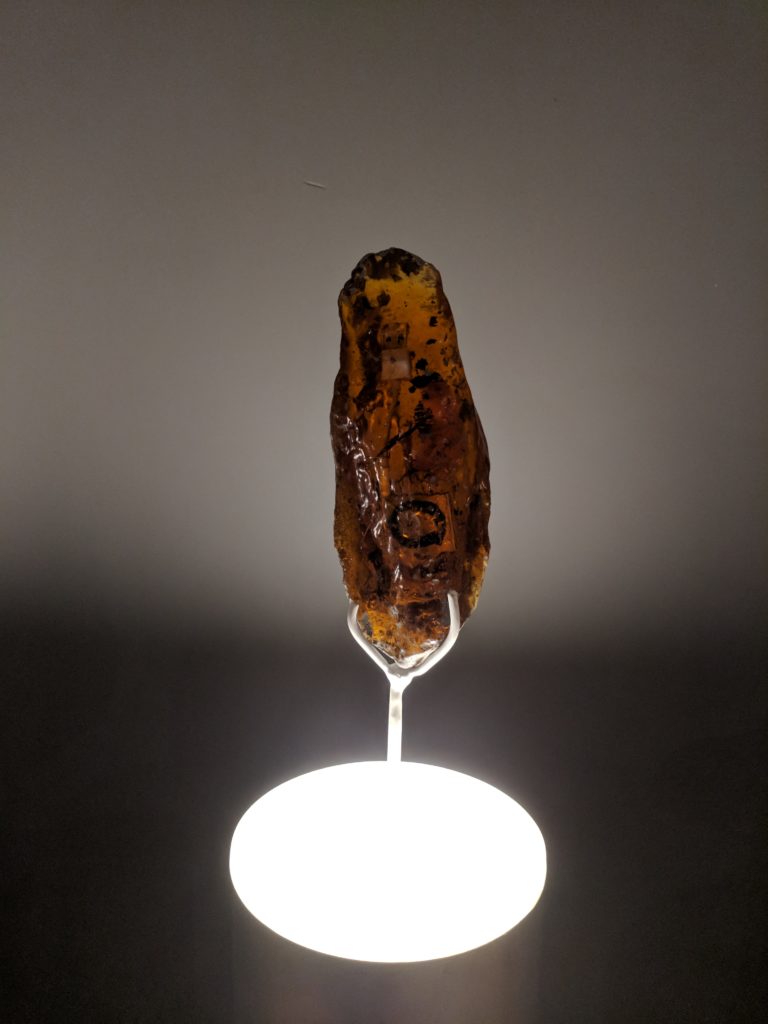 Evan Ye created these modern fossils replicating the objects that paleontologists are still uncovering but replacing the innards with the everyday objects dating them as present. As far as a piece about a potential “Museum of Capitalism” these were on point. They felt old and organically created until you saw the object which dated them. The objects seemed to be a part of every day life and there didn’t seem to be a purpose in their selection. This distance and lack of agenda made the pieces feel even more like a documentation of our times. Something chosen without a reason feels more like what would wash up on the shore or be uncovered by some alien condo project in a thousand years. 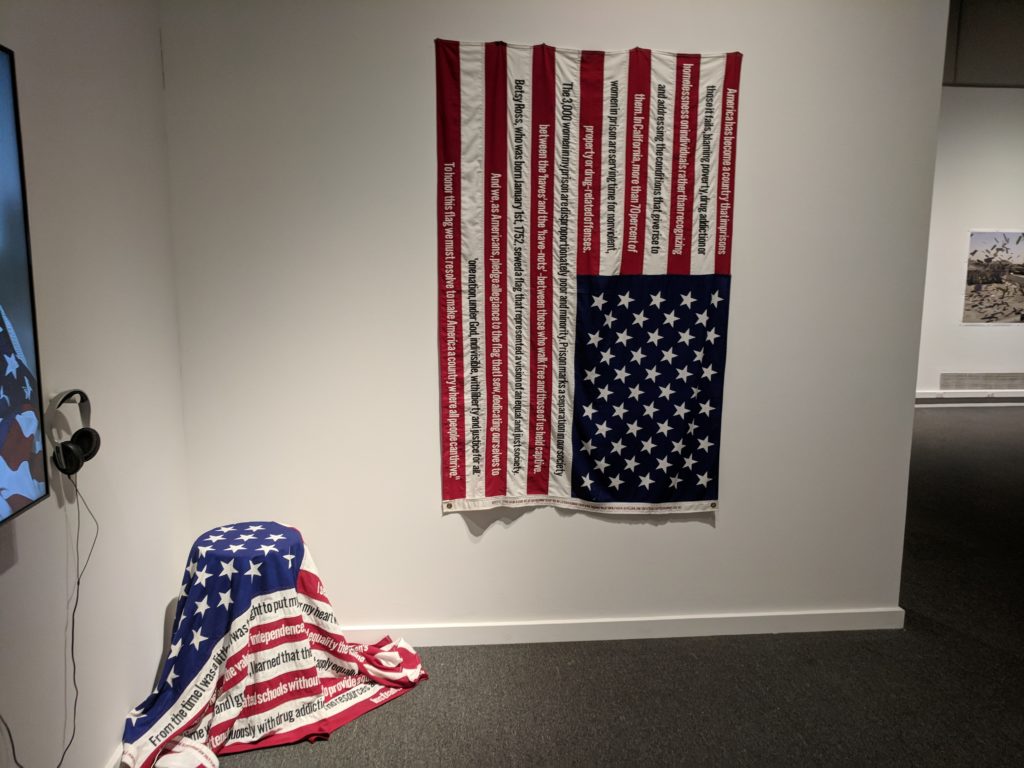 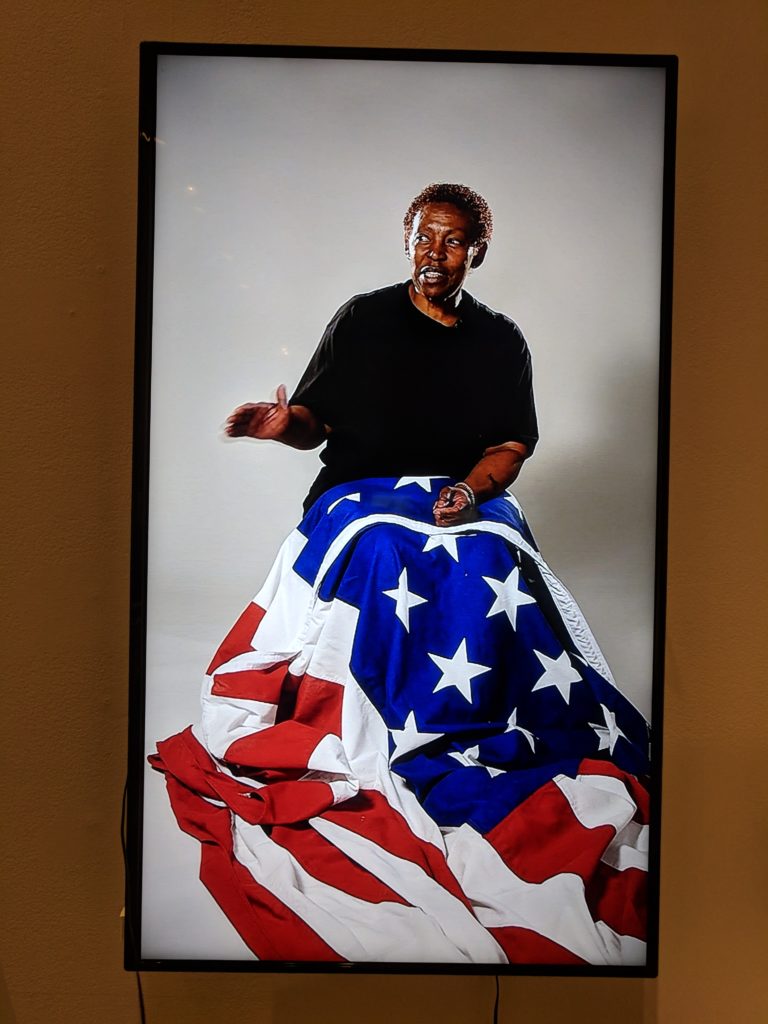 Agenda-less this piece was not! In a video loop next to the flags, Beverly Henry who worked in a prison flag factory talks about her experiences as a person of color and her search for equality while disassembling the work she was forced to do when incarcerated under the current prison industrial complex. It’s very moving. The flag is embroidered with words from her op ed which she wrote on the 254th anniversary of Betty Ross’ birthday. Unlike the Yee piece, this talks about what should be remembered, rather than what probably will. 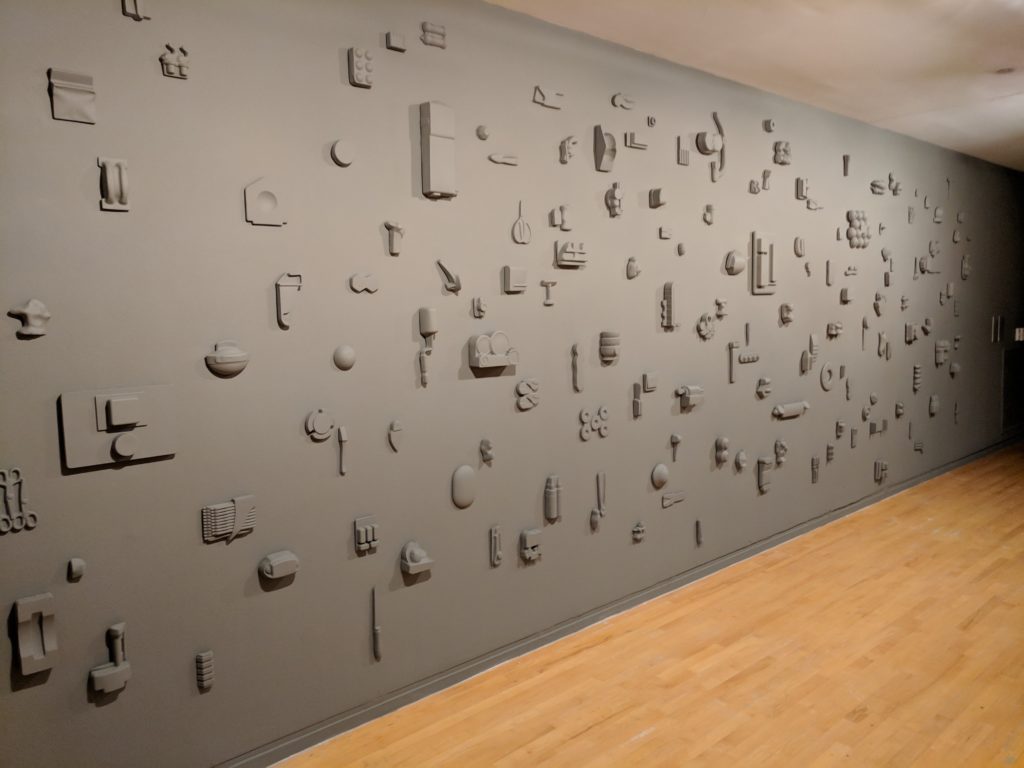 Maia Chow
In the Shell of the Old
2018, Hydrocal Casts / Paint

A wall of containers covered in paint. Simple enough idea but also completely engrossing. By removing all else, it forces you to focus on the shape of the container instead of the product it was meant to shell. Without the product, what does it say? Painting the wall the same grey tone was a great move in that it unites all of the objects into one piece to take in. Instead of 50 objects to look at, you look at the entire piece at once and that changes how you approach it. It also make it feel like a mural that was uncovered where all the markings have worn off giving it an ageless feel. 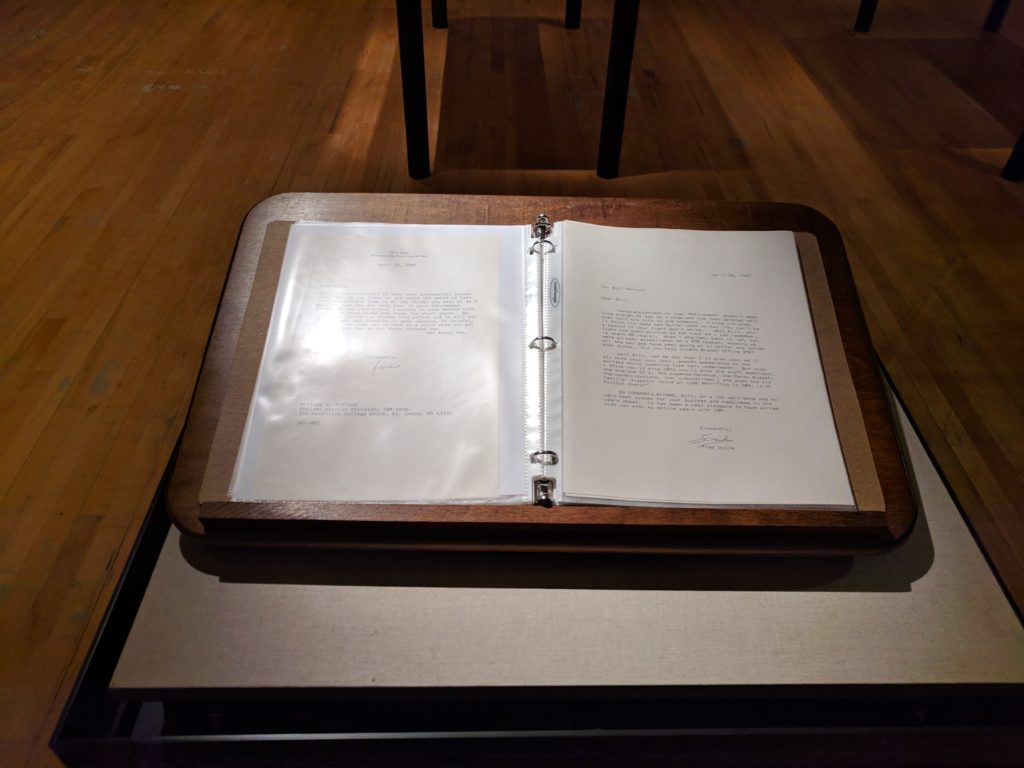 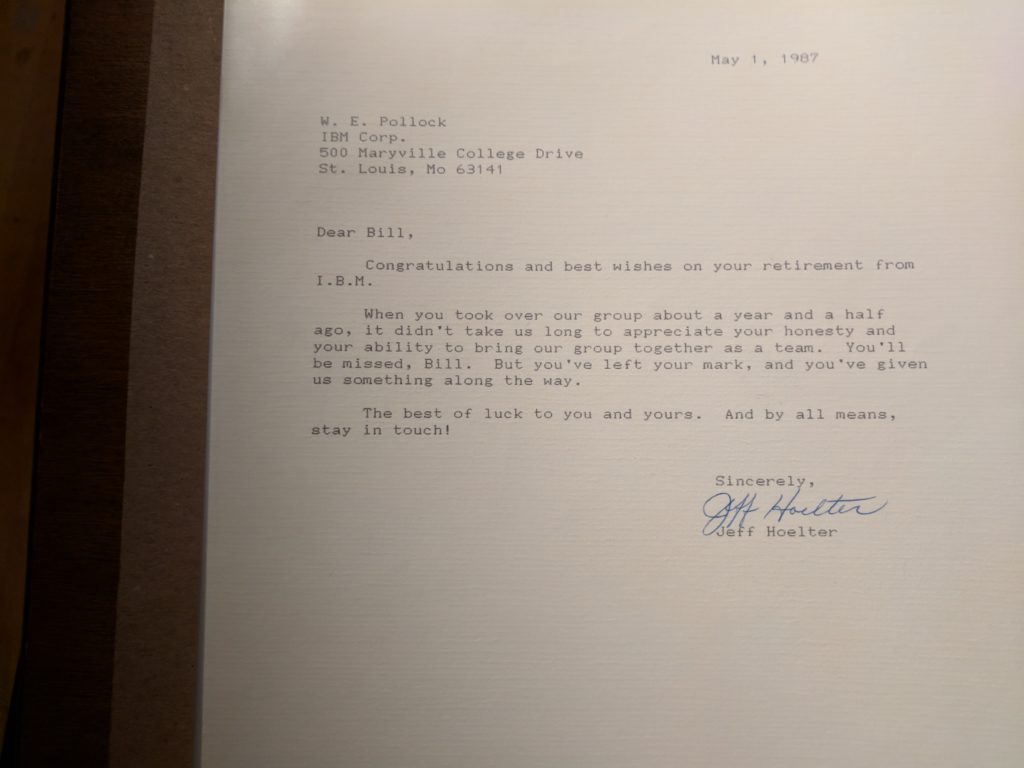 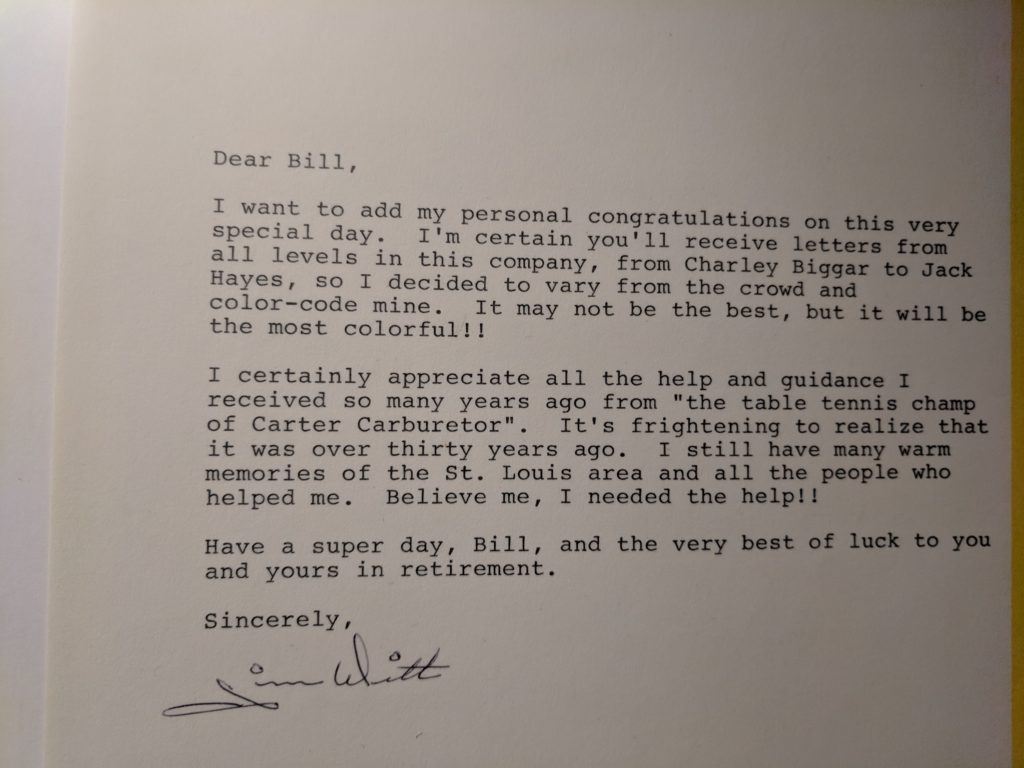 A binder is presented with a collection of letters from co-workers to a retiring IBM employee.  They paint a picture to us of a hard working and well liked employee who may have stashed these away to remember how much the people at his previous job cared about him. But what about someone who didn’t know what IBM or retirement or table tennis were? What would these be without our cultural context to tell us the story between the printed word? Are they real? Does it matter? Read it yourself to find out.

All in all, this was a fun show where many of the artists took the challenge of documenting capitalism in different directions. It feels unified and cohesive but diverse and challenging. Each piece seemed to take on a different part of our current American culture and be it critical or objective, they all worked in making you think about it. If this show survives a nuclear holocaust and time capsules it’s way into the future, I’m sure the high school kids viewing it will be much less bored than I was at Mount Vernon.

Museum of Capitalism is showing at Grossman Gallery until October 25th