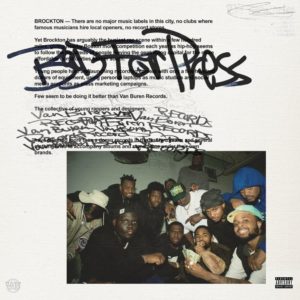 During a recent interview with DJBooth, rising Brockton coup d’tat Van Buren Records discussed their come-up, how they met, as well as their new collective album Bad For Press. When asked what they meant by the title “Bad For Press,” in-house producer Ricky Felix had this to say: “Yeah, we’re definitely abrasive with the things we be saying. I feel like with the way we talk about things, we be bad for press sometimes. It may not always be the best way, but it’s our way.”

Felix’s statement coincides with the historical disdain for hip hop from local venues, as well as certain mainstream coverage that lacks any sense of basic research (see the 2020 Boston Globe article that disregards the genre’s current local impact). Truth be told, hip hop has been “bad for press” for years in the surrounding Boston scene, or at least, underrepresented by mainstream press. Only now are we starting to see a new leaf turned, especially in Brockton, and a lot that has to do with Van Buren’s insistence on becoming the most dynamic independent rap group in recent memory.

Now consisting of 11 members-Luke Bar$, Lord Felix, Meech, Jiles, SAINT LYOR, Ricky Felix, Andrew Regis, Kiron, RLouie, Mo, and Shelby-the Brockton crew has developed organically by utilizing each of their strengths over the past five or so years without ever having to sacrifice their lively personalities. Their hard work and dedication culminated in a scorching 2019 and 2020, where each of them honed in on their respective styles through various solo EPs and albums.

In 2020, we learned of Bar$’ dichotomized lifelong journey and visual eye on GoodEvil. We heard SAINT LYOR value being yourself over artificial clout on If My Sins Could Talk. We listened to Jiles’ street wisdom and come-up on Fuck Jiles and It’s Not Much, But It’s Mine. In 2019, 2e discovered Lord Felix’s fashionable swagger and affinity for hundred-dollar socks on In Bloom, Forever and Infrared. We observed carefully as Meech meticulously offered an honest character study on Barriers to Knowing, a late year gem. And we learned that Ricky, Kiron, Regis, and Louie help tie the collective together with their respective production styles, broadly shown on their own projects in 2020.

Simply put, Van Buren creates conscientious music that carries a timeless impact felt months after initial release. This reason alone is why it has taken me a month to gather thoughts on their recent collaborative effort. Bad For Press isn’t merely a victory lap. It’s a re-introduction to those who’ve missed the message, the Mackwop co-sign, “Mo in the Benz,” “Rutland,” and the stories that have been told. Unlike many bulky collaborative albums, Bad For Press is an actual representation of what makes the longtime friends so enthralling. Felix and Kiron generate minimal, curb-stomping production courtesy of subzero 808s.

The album also benefits from a tight track-list of 13 songs, which again falls in line with their emphasis on choosing quality slice-of-life raps over algorithmic throwaways. “Medic” for example represents the perfect example of VB’s transcendent chemistry. LYOR and Felix menacingly whisper through their rhyme schemes, while Jiles, Meech, and Regis each offer ephemeral flows that sit on all sides of the rap spectrum.

Bad For Press also never lets it foot off the gas. Each artist gets straight to the point, offering knowledgable raps that pinball between anecdotal, braggadocio, and legacy-building. None of it is empty space either.

The always-thorough Meech ruminates on the fine line between lust and love while gliding over the contemplative “Girls Just Wanna Have Fun” (“I fall into lust/I live in a world where sex is enough/Became my addiction”). Lord Felix hastily anchors “It Is What It Is” with a realistic paranoia that fits snugly amongst the sandpaper-sounding beat-“Imma push the Ashton and ride it through the projects/Hopefully I crash before these n****s put a gat to me/When you young and black, they don’t ever give you options.” Saint Lyor shape shifts between conversational flows and exclamatory point-of-actions on “RELAX” while calling himself a young boy genius who rocks Brainchild. The momentous “No Interviews” allows Jiles to glide and growl his way through eating pussy on the menu while clearing out the venue. Luke Bar$ tip toes over the head banging “Lil Haiti” while trying to make a bag without feeling guilty. Regis connects space and time on “Medic.” Artistic harmony is achieved.

Although the album occasionally touches on serious topics, there is always a brief sprinkle of the collective’s sense of humor. “VB Interlude” features Bar$ as a reporter asking Ricky questions about the group as an entire spoof on the whole press conference situation. The skit falls in line with the press conference recaps they did prior to the album release. It’s just another dimensions to their already-infectious personalities.

In a broader sense, Van Buren is on the cusp of superstardom because they know how to market themselves without sacrificing their authenticity. Videos such as the Venice Beach live performance exemplify the tight-knit community found within Van Buren.  This album is a special moment for the state. As the “Outro” reminds us, the group is building a legacy that will undoubtedly pave the way for other groups in Massachusetts looking to build their own brand from the ground up. Most importantly, Van Buren is showing people what mutual support can do with one’s success in Massachusetts. The coup d’tat is upon us.