In the basement of a sprawling house in Jamaica Plain, at the end of an unpaved road right off Centre Street, is the best secret music series you didn’t know you were missing.

When they moved into their JP home during the pandemic, established Boston-area writers Bill and Shubha discovered a remarkable basement set-up – a curving bar sculpted into the wall entirely covered in varnished pennies and a number of high counters and stools: a perfect de facto performance space. It turned out they had uncovered the 2000s speakeasy Scorpio which, working through Covid and various stages of quarantine and vaccinations, they have painstakingly revived into a home for music and community.

The renewed Scorpio kicked off amidst the closure of ONCE, the displacement of Great Scott, the shuttering of Oberon, and the ongoing mourning period for Johnny D’s.

“We’re alive at a time when camaraderie and Gemütlichkeit – warm togetherness – are endangered species,” Bill wrote in an email invite for the series’ third installment. “For that reason, welcoming people we don’t know feels just as important as gathering with those we do.”

Scorpio kicked off its first semi-public, vaxxed-and-masked show roughly one year ago with a performance by Ira Klein and his band, which included percussion via too-fast-to-follow quickstep dancing on a wooden board. The space itself has since received a level of shine and polish, but not too much of either – the innards of a piano are now mounted on one wall, there’s a sound booth, and the lighting situation is very much elevated, but it’s still very much a homey basement party.

On Saturday, Oct. 15 – a pretty perfect autumn evening – Scorpio hosted its fifth installment. The series has settled into a comfortable pattern: beers, cocktails, soda, and little homemade snacks crowd the penny-topped bar, a mix of contributions from the hosts and the guests. Attendees mingle, meet, and catch up around the bar, as new arrivals file in through the basement door.

There’s a particular community flavor to Scorpio that many other small venues around Boston fail to achieve. The atmosphere was playful, dancey, and casual – a show where meeting or re-meeting strangers around the bar was the default rather than the exception. You’d be hard-pressed to find a friendlier, more intergenerational crowd of creatives coming together to enjoy an evening together, drawing from different facets of Boston’s deep literary and artistic community. It’s a place where a dull conversation is hard to find.

October’s show featured Joy on Fire, a New Jersey-based, three-piece band Bill fell in love with via their performances at Cloud Club years before. 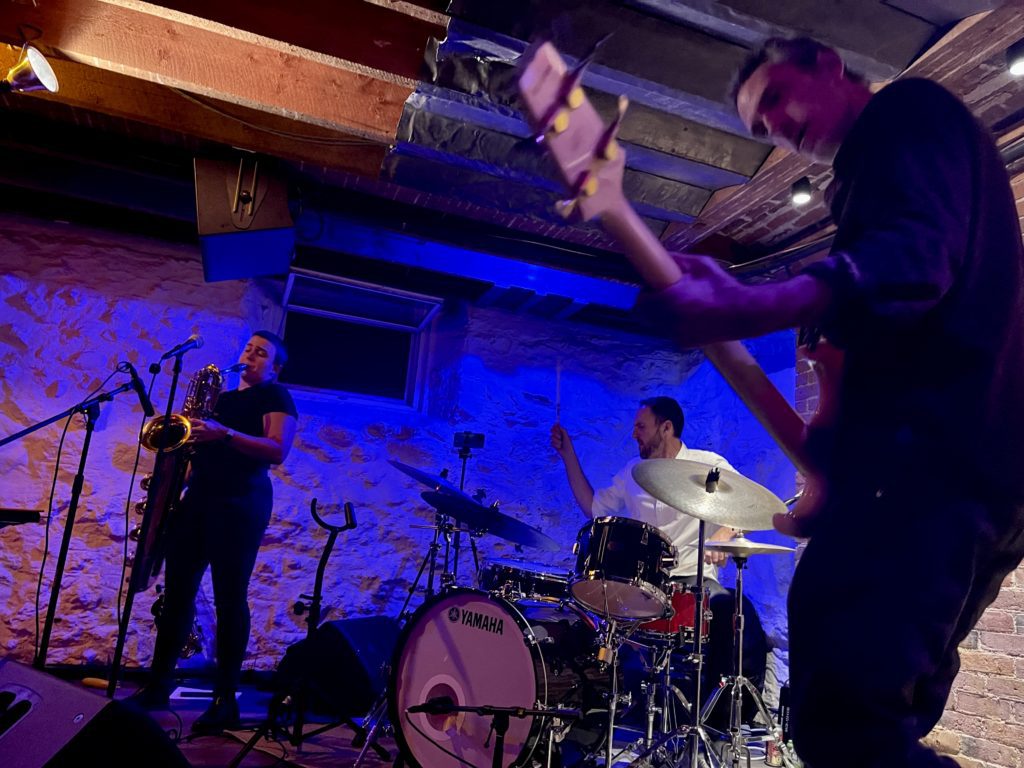 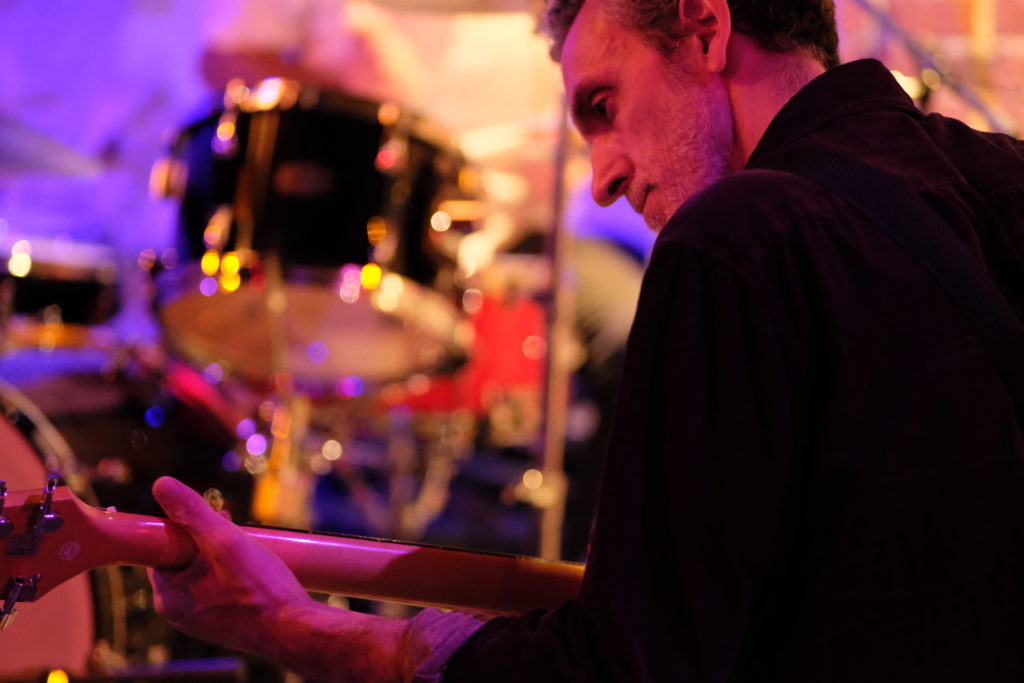 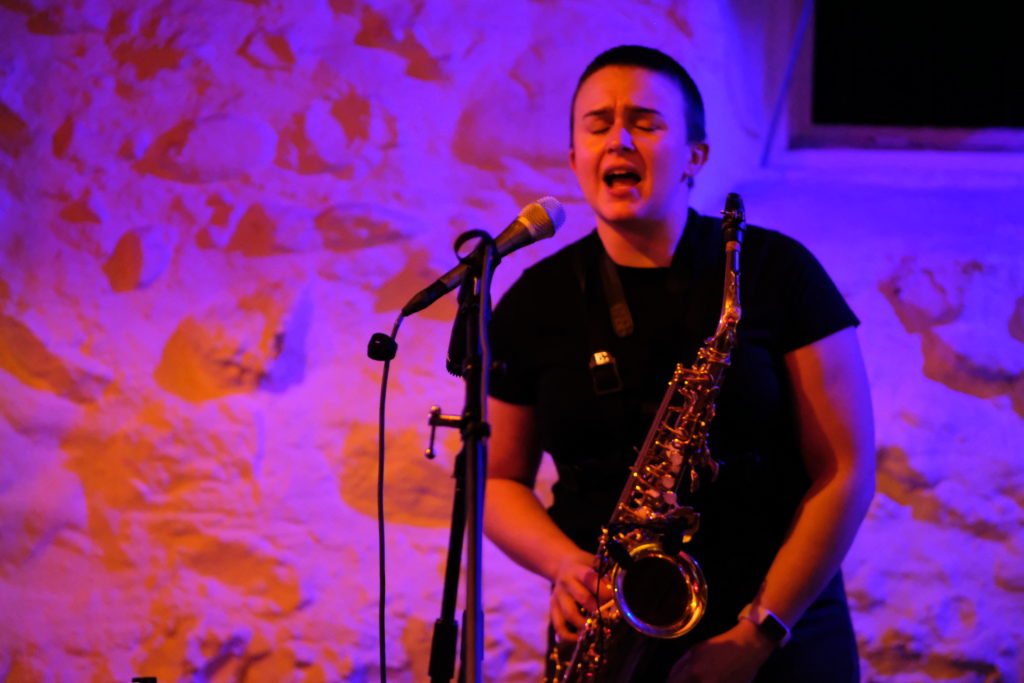 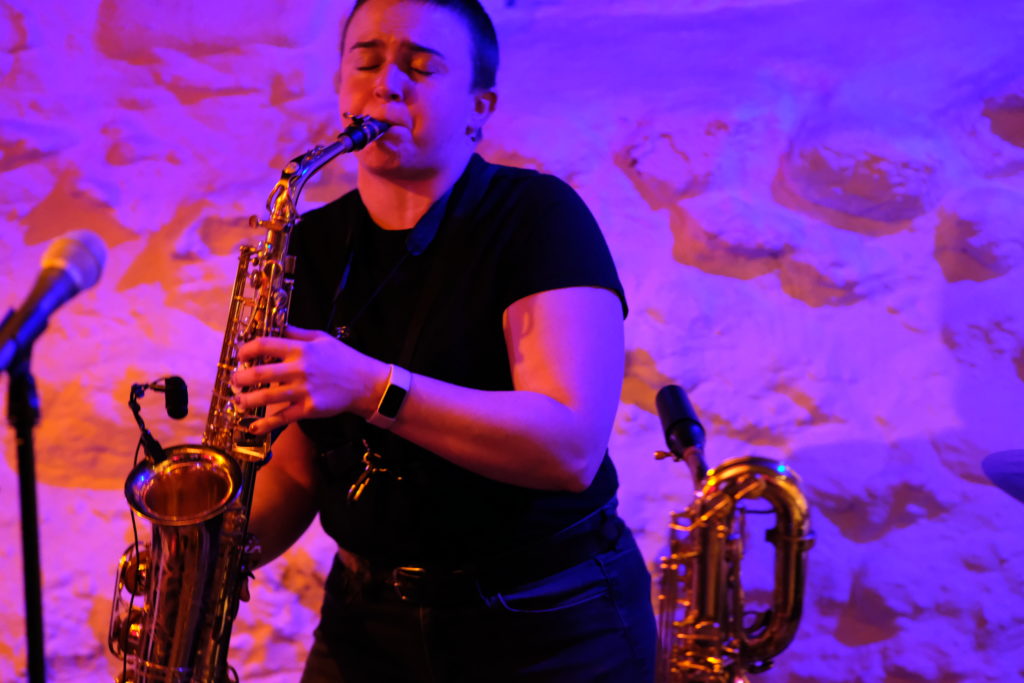 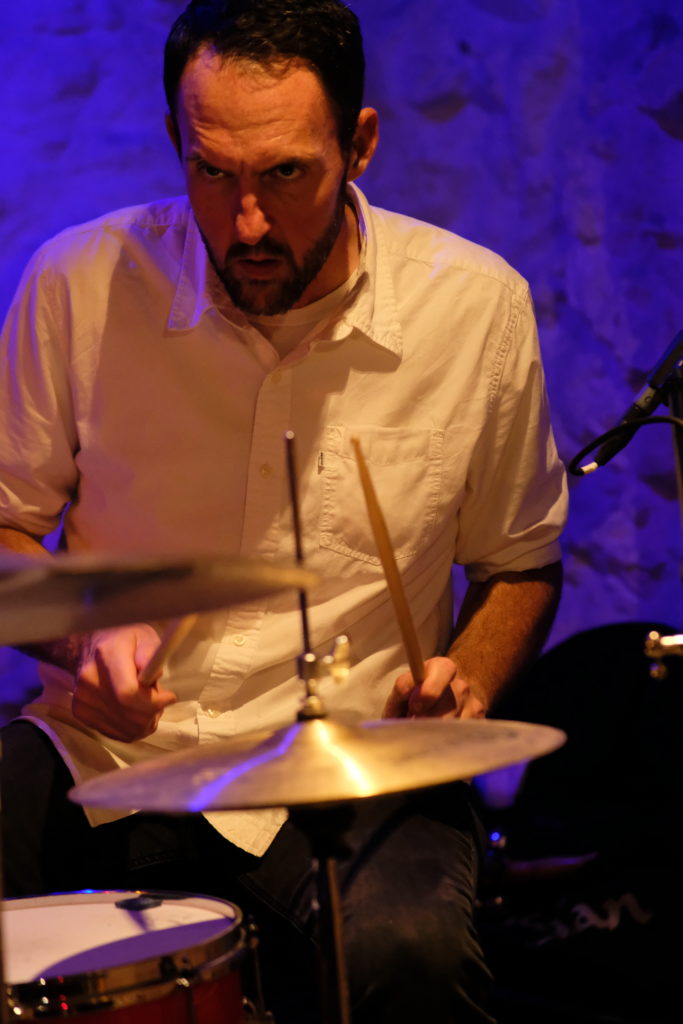 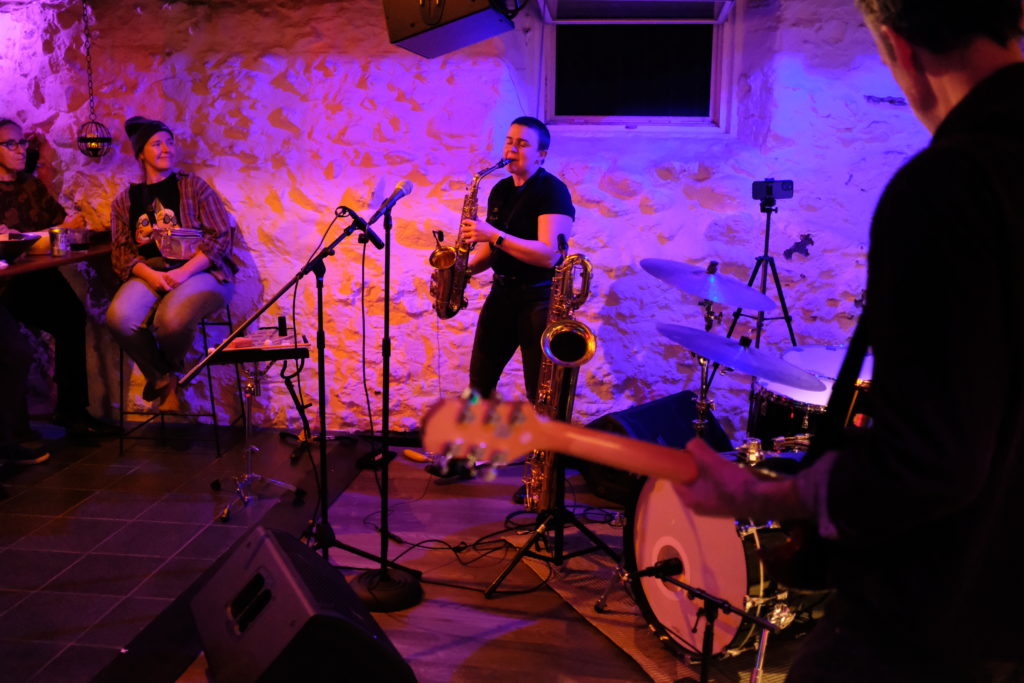 Joy on Fire brought a rolling, infectious sound, opening with the big punch of “Kung Fu Tea Party” and moving into “Hey Hey,” a mellow, open intro with a delicate xylophone riff that then bursts into the song’s explosive stride. Take your eye off lead vocalist and sax player Anna Meadors and odds are she’ll be playing a different instrument when you look back, switching out between sax, bari sax, and percussion with quick dexterity. John Paul Carillo, the band’s “fearless leader,” laid down planted, bedrock bass, swapping out with six-string guitar to lend a punkish edge. And Mark Eichenberger marathoned on the drums, with a fury and drive to emphatically remind listeners that the best drummers have the hearts of athletes.

They crashed into “Psychedelic Spider,” a thunderous, plugged-in volley that dropped from a roar to a whisper with playful elasticity, then into “Happy Holidays” – the first number of the night with vocals, which landed somewhere between spoken word and the B-52s. They wavered between established material like “Night Stick” and as-yet-unnamed tracks, maintaining the playful community atmosphere of the venue with inter-song banter and a few joking offers of instruments to audience members.

The band’s sound is typified by the title of the song that closed their first set, “Punk Jazz.” John brought a definite punky vibe that osmosized into the more jazzy sound from Anna and Mark. Joy on Fire edges toward a metal-level punch, but they keep it a bit mellower, without metal’s full-force abandon but with a controlled rush of high energy and high-level musicianship.

With lengthy tunes and patient, tidal consistency, Joy on Fire established a house-band, jam-session feel that felt well suited to the intimate setting. As they scaled up the energy with new material in the second set, the dancing really got underway. The basement acoustic gave their charging sound a strong, tucked-in feel, the kind of concentrated noise you feel in your wrists and jaw.

You can catch Joy on Fire on tour in a few more Northeastern stops this fall and winter.

Scorpio, as secret music series are wont to do, remains a bit more elusive. Bill is also one of the editors of AGNI at Boston University; if you’re interested in getting on the list, reach out to Bill through AGNI’s Contact page, using the subject line “Scorpio.”