Prequels are tricky ventures, notorious for tipping the balance more towards fan service name-drops than clever allusions and building blocks to the backdrop and conditions of the original series. There should be a point-scale questionnaire that determines if the prequel is worth your time (Was the original series’ ending already fucked up? Will any original  characters or writers return and do we like them? What even will it be about?). Luckily, White Snake shouldn’t be under any pressure from diehard fans (or, I suppose, scholars) to create something as magnificent or longstanding as the Chinese folktale itself. It’s tough on how and where the story delineates as a standalone prequel, since the original folktale is a few thousand years old and doesn’t have a canonical basis. So truly, the bare minimum to succeed here is to keep Scarlett Johansson far away.

The Legend of the White Snake isn’t as much of an Aesopian morality tale as it is an improbable standard for romantic endeavors. It’s been adapted many times over (other works can be found under Madame White Snake, The Emperor and White Snake, and My Girlfriend is a White Snake), but this White Snake, distributed under GKIDS (which is surprisingly not the name of a children-friendly subchannel of a distributor), specifically markets itself as the rewound romance between a human and a serpent-human creature before the legend begins. The practicality of the relationship is incredulous to everyone in the film with and without a forked tongue (and no! it’s not the mechanics!) and forces by way of nature and peer pressure try to keep them apart, but you know. Love. 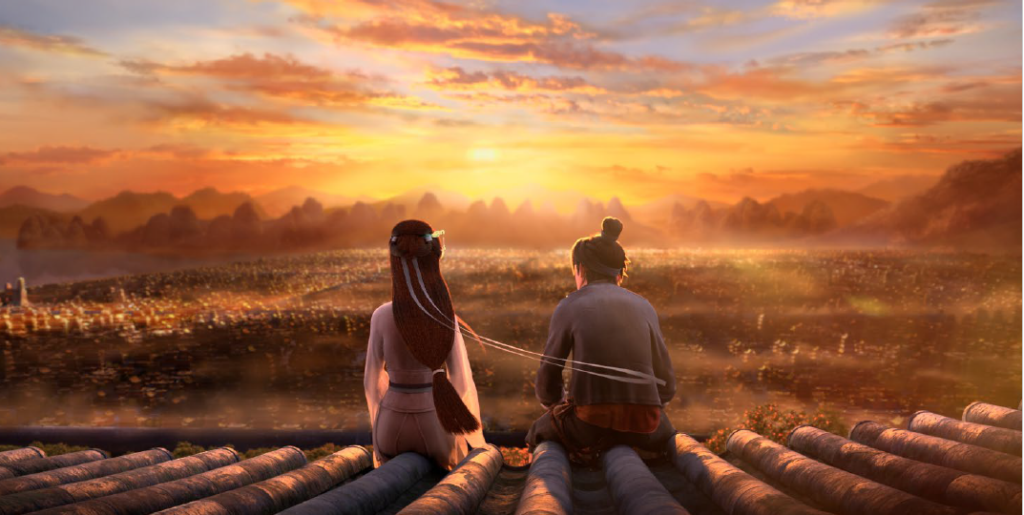 The odds broaden when we see that the human, Xuan, hails from a village that entraps snakes for the Snake Master. Take everything literally from here until the very end of this review: the Snake Master (possibly emperor of China, in an Emperor Palpatine of the galaxy kind of way?) extracts the power of the trapped snakes (who actually belong to a civilization that takes form as either a full-on snake or a snake/human mermaid situation) to fuel his own dark magic and expand his evil reign across the kingdom. Blanca, the titular White Snake, is sent by the Snake Mother (possibly empress of the snake civilization in an evil Princess Atta of the ants kind of way?) to kill the Snake Master for both safety of her people and an achieved self-immortality, but fails the mission and loses her memory in the process. Xuan saves Blanca and, unaware of her true form as a white snake assassin and the risk he carries for his village, agrees to help her find her identity.

There are several thematic vibes White Snake could have slithered towards for a solid core of a story. An adventure for the kids would be the easiest and could have fared well, especially in the dearth of Asian animation for American screens (otherwise, the peak of wuxia cinema in the past decade can be tipped off to Kung Fu Panda 3). The tween self-discovery route would have allowed adult concepts of loyalty and government overthrow to win the residual audience that are still clinging onto Avatar: The Last Airbender. Or maybe it could have been a sweet meet-cute that could have initiated a limited line of Valentine’s Day cards. Honestly, it could have been all of the above if the team chose to be daring. What it should have not done was bounce between mature content and simplistic plot devices that would have sufficed for a Nick Kids’ cartoon to create such a bewildering output. I’ve known inconsistent content in my days, and while they’ve been generally bad, White Snake had shown me things that I thought I’d never see for a movie of its genre (whatever that may be), and I’m still not sure if I saw it right.

“All around me are familiar faces”

The sex scene between Xuan and Blanca was a shocker (if it wasn’t clear before, White Snake isn’t a kids’ film), but the scenes between Blanca and her snake sister, Verta, almost threw my back out. For the record, nothing (il)legitimately happens, but there is most certainly a difference between creating queer clouds out of thin air — even between siblings! You’re seen, Elsanna fans — and the implied content that the creators are spoonfeeding us. Verta is protective of Blanca up to the point of jealousy towards Xuan, and I’d imagine that their physical closeness helps emphasize their bond, but their slowed motions and close-ups of bare spines is what fan service, prequel or not, lives for.

And Xuan! Xuan, who is constantly told by everyone that he could never be with Blanca, makes a life-altering decision to convert into a demon to cement his devotion. He goes to a terrifying fox lady storekeeper (I mean, pretty terrifying for a vanilla Tuesday night), who reveals that if he goes through with this subspecies change, he’ll be the weakest demon to exist. No strength, no increased level of intelligence, no occult power, but with the rush of love to the brain, he exclaims that it’s okay. And so he becomes…Xuan with a fox tail (and I suppose he did receive the ability to jump around in the same way that the kid in your sixth grade class Naruto-ran around the room). I know White Snake reaches beyond the impossible in a lot of aspects, but I get so choked up about the fast-lightning decision to become the modern version of a furry. This is the pinnacle of romance.

But despite the unsought sexual undertones, reckless choices, and not exactly knowing what it wants to be as a movie (the first intentional joke comes in the middle of the movie and it’s dick-related), White Snake‘s excellence nests in the design department. The animation isn’t afraid to twirl in cherry blossom petals and mold in the rotten-black underworld, all the while making for some stunning intricacy in key scenes. Even more, the action sequences, easily the film’s highlights, imitate the winding visions and ground-level offenses of a serpentine predator. Unfortunately, the gorgeousness isn’t consistent in all moving pieces, and some scenes that are outside of battles and intimacy fall as flat as a stunted 2004 MMORPG cutscene.

However this movie may turn your attention, there’s no doubt that White Snake‘s contribution to illustrated film is paramount in this dark timeline of Disney’s near-total domination. Without sacrificing the charm of detail, Beijing-based Light Chaser Animation is equipped to rival with its larger American competitors, especially in their quest of bringing a “cultural touch” to their projects. I’d hope that the next decade’s projections will push past the million-dollar self-feeding sequels and place diversity and originality at the forefront of animated storytelling, where fantasy thrives best in. But we have a month left before the new decade sets in, and White Snake sadly ain’t it.

Opens on 11/29 – catch it at Kendall Square in either English dub or subs!