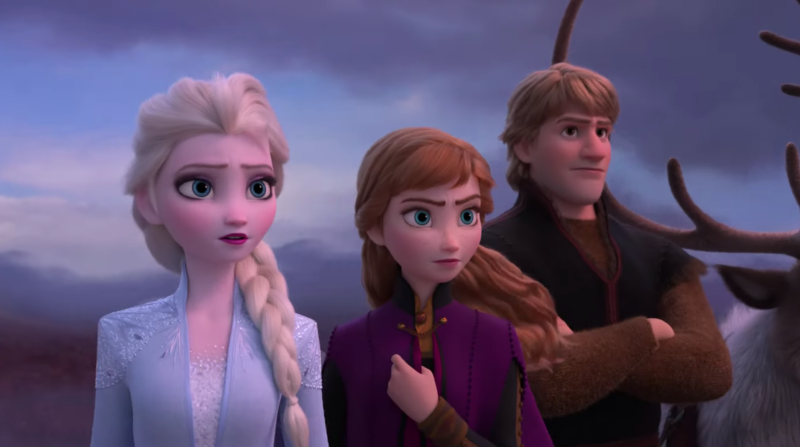 After six years, Elsa, Anna, Olaf, and Kristoff are back for another icy musical adventure in Frozen II. You may be asking, “Why?” which is fair. But if you’ve spoken to any four-year-old, you’ve probably heard them sing “Let It Go” unprompted. They might also talk about Moana, but her sequel isn’t confirmed… yet. Frozen was an inescapable phenomenon in 2013, making over a billion dollars worldwide and launching a new brand for Disney. Frozen II was an inevitability, even if no one knew what a sequel to this seemingly self-contained story would look like. The answer is better than I expected! Though Frozen II is obviously intended to make oodles of cash, the story and music rises above the pedigree of cash grabs like Peter Pan: Return to Neverland and Bambi II.

Despite being a film about a magical crisis involving out-of-control elements, Frozen II manages to ground itself in the relationship between the sisters Elsa and Anna. Queen Elsa (Idina Menzel), born with the ability to control ice, has learned to open her heart to others, especially her non-magical sister Anna (Kristen Bell). Three years after the events of Frozen, Elsa has begun to hear a strange voice calling her to an enchanted forest beyond the gates of Arendelle. Anna insists on accompanying Elsa on her journey to find the voice, scared to lose her sister to the whims of magic. Anna’s boyfriend Kristoff (Jonathan Groff), his reindeer Sven, and magical living snowman Olaf (Josh Gad) join the quest as well.

The group encounters a tribe of people living in the forest, tormented by angry elemental spirits. Elsa’s powers can calm these spirits, including a cute fiery salamander, but they aren’t the source of the voice. Elsa must go further, and she risks pushing Anna away in the process. Kristoff and Olaf are quickly sidelined after their new songs to make room for Elsa and Anna’s emotional journey. In fact, Kristoff disappears for most of the second act, but he’s hardly missed when we have a gorgeously animated battle between Elsa and a dangerous water horse on a dark sea. Elsa may have better control of her powers, but she still has trouble expressing herself to Anna, who wants her sister to see herself the way she does.

The new songs didn’t grab me as instantly as the songs from the first film, but they’re still catchy. I appreciate that they do something different instead of just reprises to original songs. Both of Elsa’s songs feature Idina Menzel pushing her voice to the limit, while Kristen Bell shows off her pipes for Anna’s big dramatic ballad. The most unexpected song goes to Kristoff, whose “Lost in the Woods” is too good to spoil here. Olaf’s song… is fine!

Frozen II justifies its existence by being extremely cool to look at and by understanding that the best part of the first film is the relationship between Elsa and Anna, and doubling down on that aspect. Here we are given a story that brings them together for most of the running time instead of keeping them apart, filled with magic and love. Don’t be shocked if Frozen III is announced immediately after what I assume will be a record-breaking weekend at the box office.