Earliest last month, I was sick and stayed at home for a week, which was the perfect time to catch up on the Marvel releases that slipped through the cracks. Initially, I was going to choose the ones important for continuity (as if that was required), but I realized that there were actually characters that I had invested my interest in over the years and would rather see what they’re up to. For example, I care so much about Wanda that I’d stick it out for WandaVision, but hesitate to watch Multiverse of Madness. I had some sort of longing for Emily Blunt as Black Widow, so I was expecting to hate-watch Johannson’s long-delayed solo endeavor (disclaimer: it’s probably my second favorite Marvel movie, which might color the way this review sees MCU levity). However, when all is said and done, Thor was my favorite from the OT6. He is one of the two Funko POP! figures I own (the other one is Majin Buu, which I remember putting down money with excitement).

The movies: eh. But I can recognize that Ragnarok was a relatively great achievement, mostly because it struck gold in renewed direction, characters, and a kind of originality that serves double-handed to the usual fanatics and skeptics. Since the original announcement for the fourth installmentm Love and Thunder, there’s no doubt that the surrounding hype was (and is) pretty huge. Director Taika Waititi returns to (New) Asgard with an Oscar in one hand, a Grammy in the other, a few guaranteed multi-season-shows under his belt, and perhaps a freer lease on life (citation needed, but behavior witnessed). The review could probably end here: Love and Thunder is going to be another good old time for a lot of people.

But if we need to get into the trenches, let’s do it. After taking some intergalactic spins at the Milano with the Guardians, Thor (Chris Hemsworth) is still working on himself. He sheds off the dad bod from Endgame, but he’s down in the dumps about his breakup with Jane (Natalie Portman, last seen in The Dark World) and his shattered Mjölnir. However, he finds that there is a looming threat in the universe: Gorr the God Butcher (Christian Bale), who wants to destroy all living gods. In the spirit of teamwork, Thor gathers the troops: Korg (a rock-type warrior voiced by Waititi), King Valkyrie (Tessa Thompson, who is better to watch when she doesn’t have to smize to convince us of her charm), his new weapon Stormbreaker, and Jane as the Mighty Thor– complete with admirable arms and a reconstructed Mjölnir. Unbeknownst to Thor, Jane has terminal cancer and sought out Mjölnir after reading about its possible healing powers. If health is indicated by hair extensions and a passion for catchphrases, then Jane outwardly might seem like she’s in good shape. Nonetheless, it’s awkward hijinks for Thor when he sees his ex-girlfriend and ex-weapon get together. 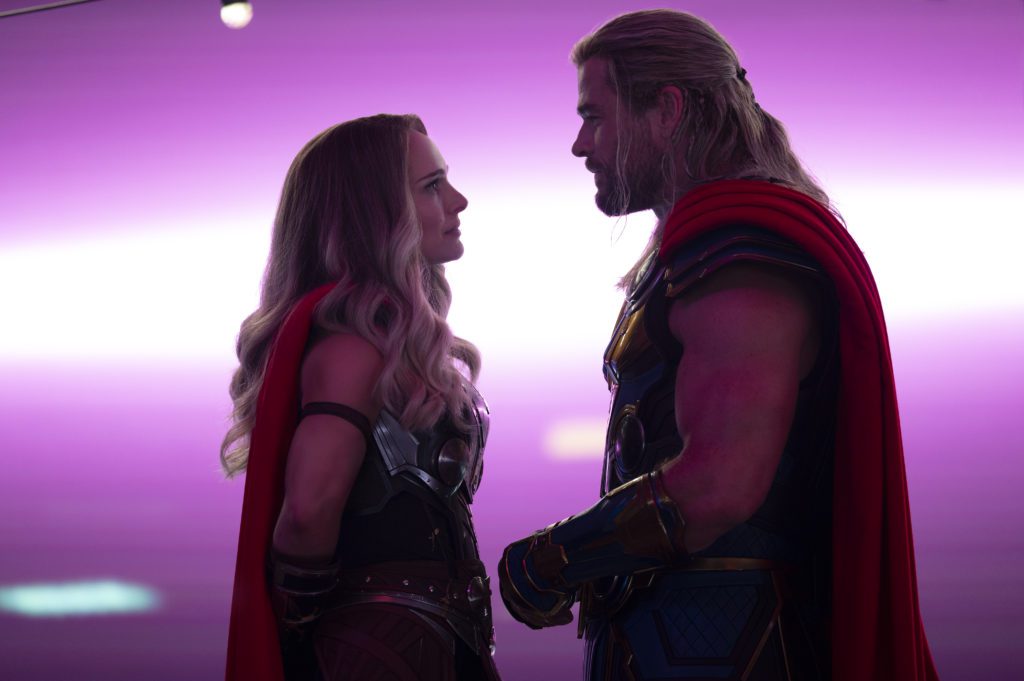 From the successes of Ragnarok and the The Suicide Squad reboot, juvenile humor seems to play best to the beat of the hit machine. Hemsworth’s himbo-infused Norse god is a strategic ingredient; though the wins are as deep as the customizable skins he owns for each movie, it works fine.  Portman is always welcome back to the jungle, but Jane’s characterization is strangely reduced to airhead material that 1) doesn’t fly well in her induction as the Mighty Thor and 2) is distractingly different, seeing as she should be the most qualified person in this movie to know what terminal cancer entails (“What comes after Stage 4, really?”). Perhaps the trade-off is almost worth it, as it means that we get to have the screaming goats (war gifts given to Thor following a hasty civilization-save) that punctuate transitional scenes. For reasons beyond maturity, I guffaw every time.

The laughs might not be at high-brow punch-ups, but it doesn’t mean that the fun isn’t real. Now, I promised myself that I wouldn’t complain about Marvel in that Critics’ Voice. However, I believe that if Waititi was able to direct Love and Thunder outside of the family-friendly bubble, we could have a banger of a superhero flick. As it is, the pacing is fairly standard, every frame looks like a photo still, and the good guys win. But if there is anything to take away from the movie, it’s seeing just how fucking good Christian Bale is. As Gorr, Bale delivers with such an intensity that the ’80s aesthetic (which is not as prominent as the trailer will have you believe) and all breathing cast members pale in comparison. Some of his lines (“Your sisterhood was led to slaughter,” he baits Valkyrie when the Thor team is ensnared in Gorr’s hangout, the Shadow Realm) are committed with a viciousness that comes so unexpected that I don’t even think Kevin Feige has a baseball cap for the occasion. I come as a fan of Blanchett, who commendably gave Hela a face and sensual villain energy. Here, Bale gives Gorr not only the body and soul of a character — especially one that is relatively new in the comics — but the rightful place as the villain to watch out for. I say this knowing next to very little about the scare thrills of the MCU (and maybe not seeing Raimi’s influences in Multiverse could make this comment less substantial), but this guy is terrifyingly phenomenal.

While Gorr is surely the moment, Love and Thunder is essentially composed of a lot of cherished moments. Maybe it’s corny to have the fight scenes play out to a Guns N’ Roses music video, but when “November Rain” hits, it looks exactly what I’d imagine Slash’s guitar dreams about (and almost edges out “Immigrant Song” in Ragnarok). What I’d like to think is that, at the end, everyone is having fun — I know Russell Crowe, who plays a showboating Zeus, certainly had a spring in his gladiator-clad step. While I don’t feel like I’d be compelled to buy another, Funko-Thor can rest easy with me.

Opens Friday, 7/8 pretty much everywhere (though, as always, the Hassle recommends the Capitol or the locally-owned multiplex of your choice).