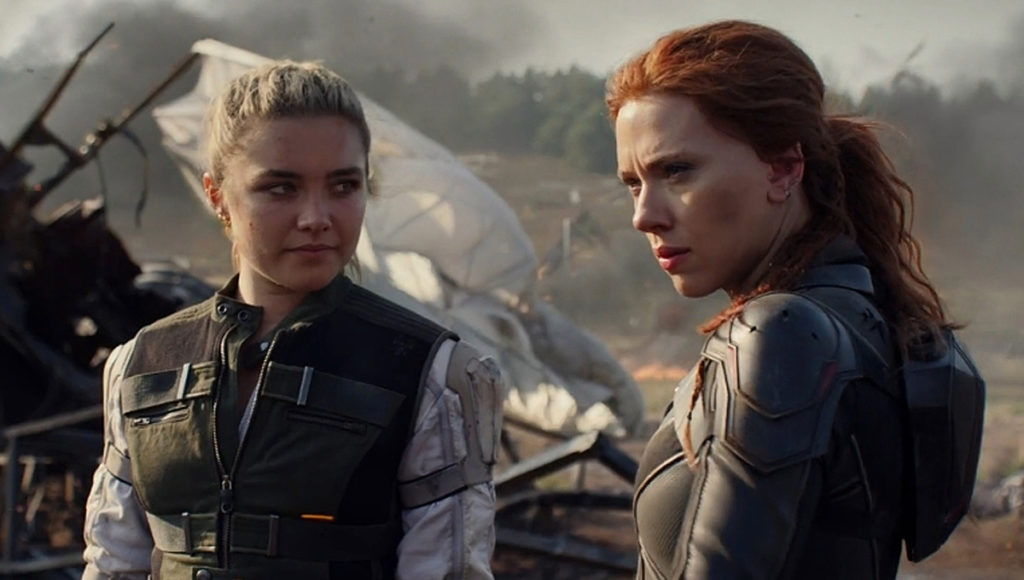 How strange is it that Marvel’s “Phase Four” begins with a prequel about one of the only characters to die during the events of Avengers: Endgame? Not that I actually care, but it’s representative of the disrespect shown to Black Widow/Natasha Romanoff and Scarlett Johansson throughout this cinematic saga. First introduced as a sexy secret agent in Iron Man 2, Black Widow has constantly been forced to play the role of “girl” among the many beefy boys of the Avengers. Joss Whedon put his refried Buffy spin on things, giving her quips but making her consider herself “a monster” for having had her uterus forcefully removed. While Iron Man, Thor, and Captain America each have a solo trilogy, Natasha’s solo film was always “coming soon.” And then she died!

So now we’re in a position where Black Widow is a farewell to both character and actor, a rare solo film that can’t have a sequel because she is dead, a film that exists to retcon her ending from “falls off a cliff” to “literally saves all girls.” Quite the overcorrection, but not entirely unwelcome. The movie is fun enough, and I’m sure the fans will love it. Still not sure that Black Widow is anyone’s favorite, but I’m not against that.

After an extended flashback to Natasha’s teen years with a spy family in Ohio, we catch up with her after the events of Captain America: Civil War, which find her on the run from General Ross (William Hurt with some crazy eyebrows). Natasha is a bit adrift, but after an attack from the mysterious Taskmaster, she decides it’s time to tie up some loose ends from her past. With the help of her deprogrammed spy sister Yelena (Florence Pugh), Natasha brings the rest of her Russian family, Red Guardian (David Harbour, having a lot of fun) and Melina (Rachel Weisz), together to take down the man behind the Red Room (Ray Winstone) once and for all.

“Standalone” does not really mean anything anymore in the web that is the Marvel Cinematic Universe, but this is as close as we can get. There are jokes about other Avengers, but this mercifully centers on this small broken “family” without bringing in a cameo from Tony Stark. The MCU needs to diversify its storytelling if it’s going to continue to expand, yet they keep falling into the same CGI explosion third acts. Even WandaVision couldn’t escape! We still have three movies and two shows remaining this calendar year. Will people finally get sick of these things? It’s starting to feel like the answer is “no.” But that can’t be true. Right?

Black Widow is a Marvel movie like many others, with fun action setpieces more interesting on a meta level than a regular one. It doesn’t feel like it exists for anyone beyond Scarlett Johansson herself, which I suppose is alright. After everything this cinematic universe has put her through, she’s earned a win. Well, as much as a multimillionaire movie star has earned anything.

Opens in theaters everywhere Friday, 7/9 (though, as always, the Hassle recommends the Capitol or your local independently owned multiplex). Also available for $30 “premium access” on Disney+.