It occurs to me, as I pour my tea and crank the volume on my MeTV reruns, that a not-insignificant portion of the Hassle readership is likely too young to remember what it was like to live in America in the immediate aftermath of 9/11. So gather round, kids, and I’ll tell you: it was fucking nuts. This wasn’t like Trump’s election, which was only the most obvious manifestation of trends which had been building for years beforehand. When those planes hit, it was like someone flicked a switch that made large swaths of the country lose their goddamn minds overnight. People who had previously seemed mostly normal suddenly became raving, outspoken warmongers and Islamophobes. Cheapjack merchslingers made a fortune selling American flag bumper stickers that read “THESE COLORS DON’T RUN” (these stickers were all cheaply made, and began to run all at once sometime around February). Radio stations decided en masse that they would no longer play “Walk Like an Egyptian,” because Egypt was too close to Afghanistan. The Capitol Steps released an excruciating NPR special which forewent the troupe’s usual brand of snippy satire to fawn over George W. Bush and Rudy Guiliani. I personally recall eating at two different restaurants with “Freedom Fries” on the menu– and this was in Massachusetts. In the words of a classic Onion headline from the time, America was looking for something to hit, and for (at least) a few years, that seemed to be the only thing anyone talked about.

It’s worth keeping this in mind while watching The Mauritanian, the latest in what I’m assuming will be a long cycle of films attempting to reckon with the unfathomable cruelty inflicted by our government in the name of “anti-terror” justice, which started under the Bush administration and has never, to any meaningful degree, truly ended. If the conduct on display seems cartoonishly cruel and evil, remember that not only did it really happen, but there were plenty of seemingly rational people on TV every day explaining that this abominable conduct was necessary, but reasonable. Like 2019’s The Report, The Mauritanian follows a dogged seeker of truth, looking to cut through the red tape (and the black redacted marks) to figure out what, exactly, the US government is doing to its prisoners of war in Guantanamo Bay, and what its endgame is. Unlike other recent similar films, however, The Mauritanian also puts an actual prisoner at its center.

That prisoner is Mohamedou Ould Slahi (played charismatically by Tahar Rahim), a soft-spoken young man languishing deep in the bowels of Gitmo. Like most prisoners in the facility, he is being held without formal charges, but the main accusation seems to be that he was a recruiter for Al Qaeda and one of the principal architects of 9/11. Mohamedou denies this up and down, but, due to the tenor of the times, few American attorneys are willing to represent him (by the time the story begins in earnest, Mohamedou has been locked up for nearly five years). Potential salvation comes in the form of Nancy Hollander (Jodie Foster), a venerable activist lawyer who’s been fighting the good fight since Vietnam, and her plucky paralegal, Teri Duncan (Shailene Woodley). Representing the prosecution is Lieutenant Colonel Stuart Couch (Benedict Cumberbatch), a soft-spoken southerner who lost a friend in the attacks. Naturally, Hollander is hindered in her quest for the truth by both the secrecy of Bush-era anti-terror policy and her client, who is hesitant to divulge too much under the watchful eye of Uncle Sam. Gradually, however, both Hollander and Couch begin to get a sense of the truth, and what, exactly, they’re contending with.

For much of its running time, The Mauritanian has a curious lack of urgency. This can, perhaps, be chalked up to the slow-moving nature of Guantanamo Time. Once a prisoner was moved to the facility, there was no set timetable. The thinking was that, if a suspect was there, they deserved to be, and many, like Mohamedou, were (and still are) held for years without so much as charges being filed. This presents something of a conundrum for filmmakers; like The Report and Zero Dark Thirty, this undeniably gripping story takes a while to tell, with periodic two-years-later time jumps as the protagonists continue to be stymied by bureaucratic dead ends. After a while, it’s hard not to share the characters’ weariness.

Like those films, The Mauritanian gains ballast from its formidable leads. Foster is a canny pick to play Hollander; she is, of course, no stranger to walking through cavernous prison halls and verbally sparring with potential monsters, but this film finds her closer to Jack Crawford than Clarice Starling. Foster’s Hollander walks a tightrope, a crusader for empathy and justice who nonetheless finds herself sizing up her client to determine whether he’s a hapless victim or a manipulative terrorist kingpin. Foster has aged into this sort of role well, speaking volumes through her tight-lipped smile and crafty eyes. The other side of the narrative is less assured, awkwardly trying to position Couch as both a crusader for vengeance and a voice of conscience to the military industrial complex (I’m never quite sure how to judge Cumberbatch’s “American” performances; his accent work is honestly not bad, but his visage is so ethereally and unmistakably British that it feels like watching an alien walk around in an ill-fitting human suit). Anchoring it all is Rahim, whose wry, soulful performance gives the first two acts a much-needed spark. Mohamedou is not a “movie terrorist,” but rather a man whose wit and intelligence have somehow not been ground down by his circumstances. For much of the first two acts, the film plays coy with just how much Mohamedou knows (he did train with Al Qaeda in the ‘90s, though he insists his aim was to fight alongside American forces against the Soviets), but he has such spark that you can’t help but side with him. Even when the film drags, it lights up when Mohamedou is in the room. And it does drag, right up to the point where it very dramatically does not. 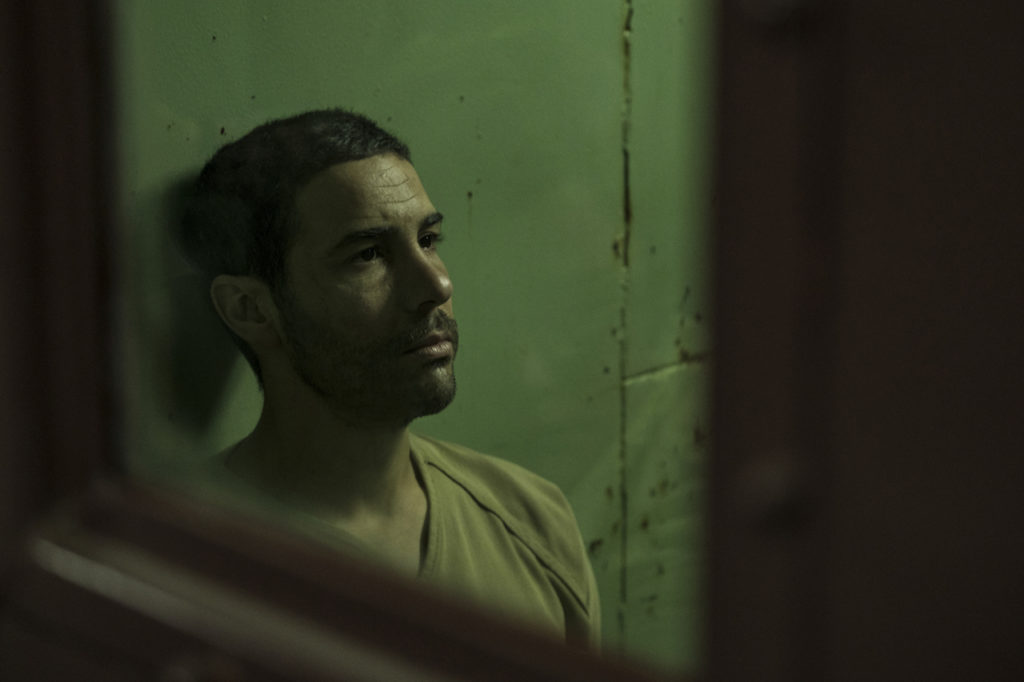 I’m not sure I have the words to adequately prepare you for the turn this film takes in the third act, when Hollander finally persuades Mohamedou to open up about his treatment at the hands of the Guantanamo guards. At this point, the film drops its staid courtroom drama aesthetic and careens into something very close to full-on psychedelia. Within the claustrophobic confines of the academy ratio, we are delved into the full-on psychological assault perpetrated upon terror subjects by the US government. Some of this we’ve seen in movies before; the waterboarding, the blaring heavy metal, the shackles forcing prisoners to stand on their feet for days at a time. Then there are the rubber Shrek and kitty-cat masks worn by his tormentors, turning them from earthly authority figures into bizarre nightmare demons. These masked guards speak nonsense to him, give him forcible lap dances, show him convincing-looking paperwork that his mother is being raped in another cell. As Mohamedou’s faculties are worn down, the film itself becomes something of an extended dream sequence, with characters from different parts of the narrative wandering in and out and swapping faces. Perhaps in homage to the film’s mid-’00s setting, these sequences would not be out of place in a Slipknot video, or perhaps a horror film from the Bush-era “torture porn” cycle. It is a genuinely shocking sequence, all the more so for how unexpected it is.

Which, again, speaks to the nightmare quality of those dark years in American history. The 2000s were characterized by ugliness, not only on the world political stage, but in the pop culture we consumed: Fox News and Girls Gone Wild, the objectification of Britney Spears and the ostracization of the Dixie Chicks, popped collars and frosted tips and “We’ll Put a Boot In Your Ass” t-shirts. The Mauritanian isn’t a perfect film, and I don’t know if we’ll be able to fully process this story for maybe another decade or more, but it does as good a job as any I’ve seen in conveying the pure madness of the era. In perhaps the film’s most telling sequence, Hollander and Couch have a head-to-head meeting in the Guantanamo Bay gift shop, complete with horrifyingly racist snow-globes and semi-ironic “Surf Gitmo” mugs. If you’re wondering what America was like in the days following 9/11, that’s pretty much it in a nutshell.

Opens in theaters Friday, 2/12 (but, again, please be careful). Coming to VOD in March.