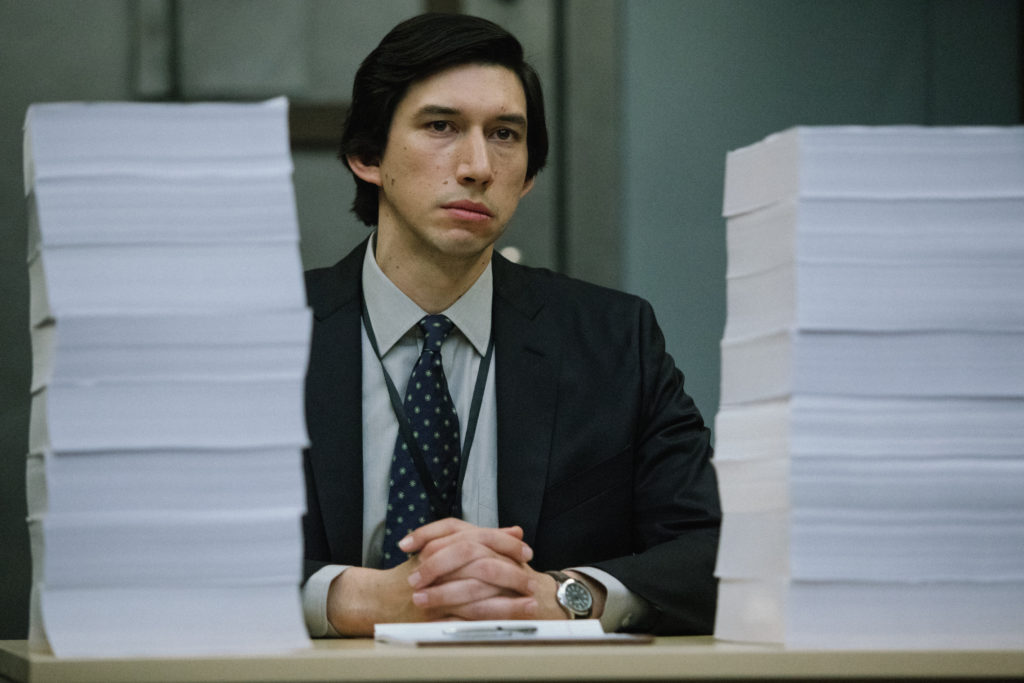 Washington, DC scares the hell out of me. Every time I go down there– which, admittedly, is not often– I can’t shake the creeping dread that the sea of interchangeable white guys brushing past me on the sidewalk are privy to terrible secrets my insulated mind can’t begin to fathom. Some years ago I was eating lunch at a DC Chinese restaurant with a friend I was helping move, and I found myself slowly realizing that each and every one of my fellow diners was the Cigarette Smoking Man from The X-Files. The effect was positively bone-chilling– and this was on the same day I saw Ted Bundy’s Volkswagen.

This existential horror touches every aspect of the life of Daniel Jones, the senate staffer tasked with heading the committee to investigate the CIA’s use of “enhanced interrogation techniques” (read: torture) in the War on Terror and beyond. As played by Adam Driver in Scott Z. Burns’ ripped-from-the-headlines The Report, Jones is not a fanatic, at least at the outset; he’s simply driven by a straightforward need for justice. That he winds up alone, sleepless, and isolated in a windowless office, raving at a wall of documents, photos, and string, says far more about America in the twenty-first century than it does about him.

The structure of The Report (which, as we see in the opening credits, is redacted from “The Torture Report”; this is a clever touch, but you have no idea how grateful I am as a writer that it’s not officially stylized as The _______ Report) is largely bifurcated between “the present” (beginning in 2009, when Jones begins his investigation) and “the past,” which follows a team of frantic CIA operatives from the morning of September 11, 2001 through the bulk of the Bush administration. As we learn along with Jones, the Enhanced Interrogation Techniques program (or EIT, a shorthand I find grimly amusing) was, quite frankly, a mess, built upon pseudoscience and psychobabble and producing dubious results at best (and, at worst, dead bodies). But Washington being Washington, few if any of those responsible were held accountable, and the more voluminous Jones’ report becomes, the more hopeless it seems that it will ever see the light of day. 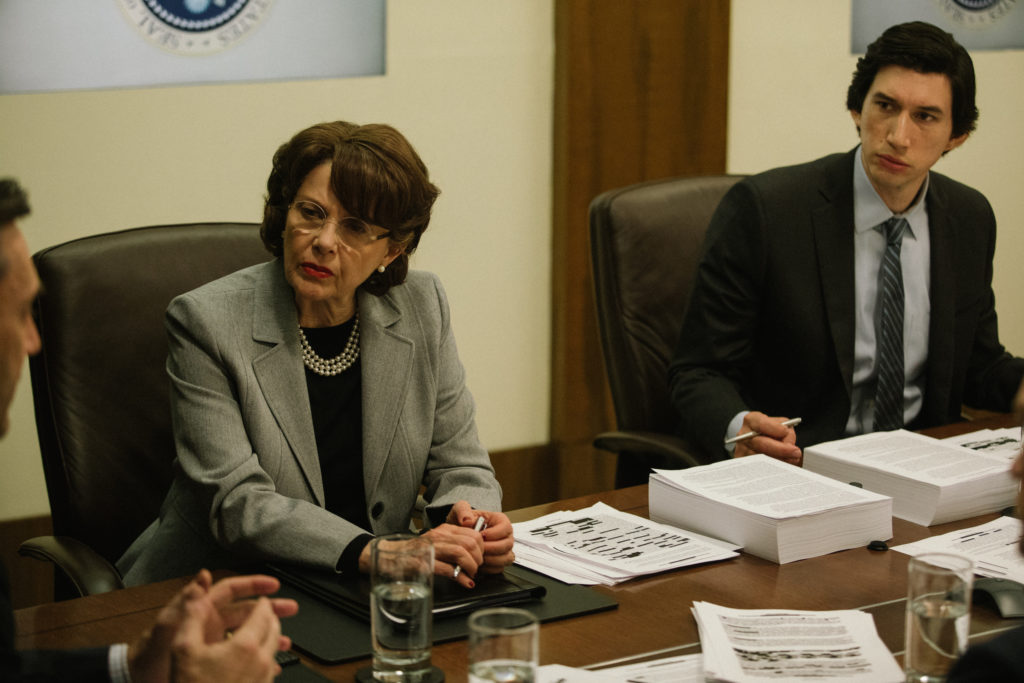 The great success of The Report is that it makes torture look fucking awful. This is perhaps more challenging than it might sound; because we’re conditioned to root for action heroes, and because the detainees are, at least allegedly, partly responsible for some truly heinous acts, depictions of this era in American intelligence walk a tightrope between glorifying torture and apologizing for terrorists (a point hammered home when Jones bemoans America’s love affair with Jack Bauer; later, in a bit of meta-shade, he catches a TV spot for Kathryn Bigelow’s Zero Dark Thirty). Burns gets around this by portraying torture not as glamorous, or even particularly cinematic, but simply gross. Prisoners are chained and forced to stand naked while agents yell incoherently, Reign in Blood blaring from a cheap boombox. The squalid aesthetic, combined with the yellowish tint used to connote flashbacks, gives these scenes the feel of one of the cheaper Saw sequels. There are voices of concern (notably from Maura Tierney and Tim Blake Nelson), but the entire agency seems to be in a sort of folie à mille, rabid with post-9/11 fear and under the thrall of quackish psychologist James Elmer Mitchell (Douglas Hodge), a fascinatingly awful figure of whom I’m surprised I was not aware.

Yet I don’t want to give the impression that The Report is sensationalistic. On the contrary, like Jones himself, it is clear-eyed and methodical in its presentation of facts. Wisely, Burns opts against “humanizing” the film with fictionalized relationships or subplots (Jones confesses at one point that he was in a relationship at the beginning of his investigation, but that he “wasn’t a very good partner”; once your life is devoted to ferreting out torturers and executioners, romance presumably falls by the wayside). Instead, the story becomes the story. On the one hand, you have Jones, his boss, Sen. Dianne Feinstein (Annette Bening, in a quietly powerful performance), and whoever is willing to embark with them down the rabbit hole. On the other hand, there are various stand-ins for the CIA– including future director John Brennan (Ted Levine, no stranger to doing terrible things to people in basements)– who are all clearly convinced they’re doing the right thing, even in the face of all evidence that what they’re doing is, in fact, utterly insane.

As you might expect from the subject matter, The Report does get a bit talky, which means those with a short attention span for political intrigue and due process may find their patience tested (microfiche may have been an imperfect technology, but at least it was a bit more cinematic than typing a name into a search engine). But The Report is a vital retelling of a chapter in history which remains murky, despite its place in recent memory. It’s also smartly written, cracklingly paced, and presented by a cast of immensely watchable talent. America may not be in a particularly better place now than when Dan Jones first checked into that basement office, but as long as crusaders like him are digging for the truth, we’ve at least got a shot.