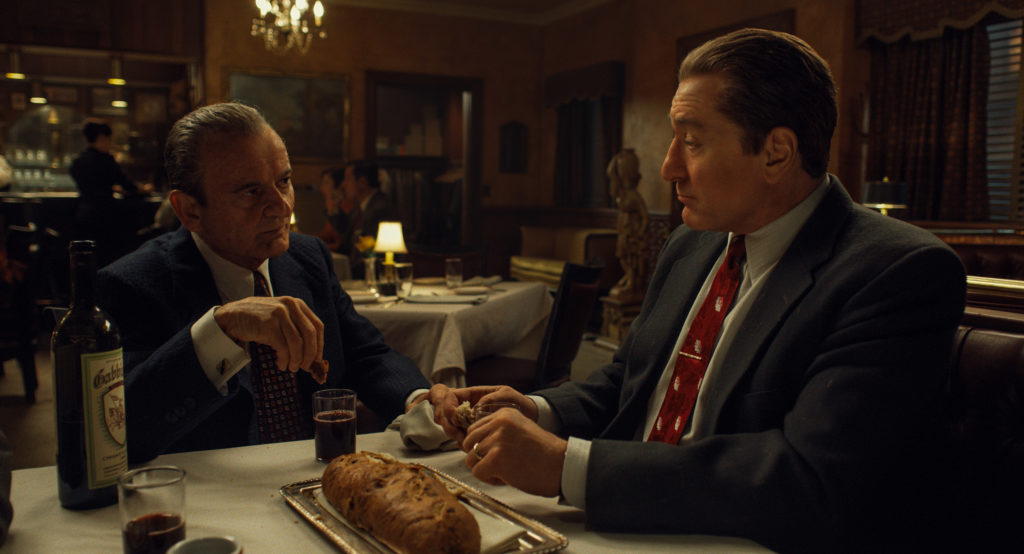 Martin Scorsese is our greatest working filmmaker. At this point, this is scarcely up for debate; no director has given us so many films which have so indelibly woven themselves into the critical pantheon, the cultural consciousness, and the box office (the only filmmaker I can think of who comes close in this regard is Spielberg, though his aims are different enough from Scorsese’s that they might as well be different mediums). What’s more, where many of his peers in the Easy Riders, Raging Bulls generation have receded in their influence (though some have, on occasion, come roaring back), Scorsese has continued to make films that feel vital, alive, and relevant; whether you love or hate The Wolf of Wall Street, it’s the sort of zeitgeist-capturing moment that would be the envy of any filmmaker, let alone a 70-year-old industry veteran. This is to say nothing of the tremendous work Scorsese has done as an advocate for film preservation and education, from his work at the World Cinema Project to directing a massive 3D spectacle to teach children about Georges Méliès. There’s a reason why his casual mention that he doesn’t care for superhero movies has spun into the dumbest “controversy” of the year; when it comes to film appreciation, it may not be an exaggeration to say that no single person’s opinion carries more weight.

In other words, whenever Martin Scorsese makes a movie, it’s cause to sit up and take notice. Yet even taking this into account, The Irishman* carries with it the aura of something special. For one thing, it finds Scorsese returning to the gangster genre, which, while far from his only wheelhouse, has seen him produce uniformly spectacular results. It also reunites him with frequent muses Robert De Niro (with whom he has not made a feature film in 25 years) and Joe Pesci (who has been functionally retired for more than 20), as well as Al Pacino (who, astonishingly, has never worked with Scorsese before). This is all in addition to the fact that The Irishman is among the most ambitious projects of Scorsese’s career: a sprawling, three-and-a-half hour labor of love, as well as a massively expensive showcase for cutting-edge visual effects, despite primarily being a movie about old men sitting down and talking to each other.

In the hands of any other director, a film like The Irishman would be an extraordinary gamble, potentially a historic folly. If you’ve read this far, it should come as no surprise to you that it’s easily one of the best films of the year.

Said Irishman is one Frank Sheeran (De Niro), a truck driver who makes the (seemingly lateral) move to becoming a mafia hitman under the guidance of Russell Bufalino (Pesci) and Angelo Bruno (fellow Scorsese all-star Harvey Keitel). This being the late 1950s, the boundaries between organized crime and organized labor are porous, and Frank soon finds himself in service of flamboyant Teamsters leader Jimmy Hoffa (Pacino), eventually rising to the top ranks of the unions. However, as the years go by and political fortunes shift, tensions rise between Frank’s two masters, and eventually Frank needs to make a choice. Far be it from me to indulge in spoilers, but if you’re familiar with the source material, or the general arc of Hoffa’s life, you probably have a sense of where things are headed. 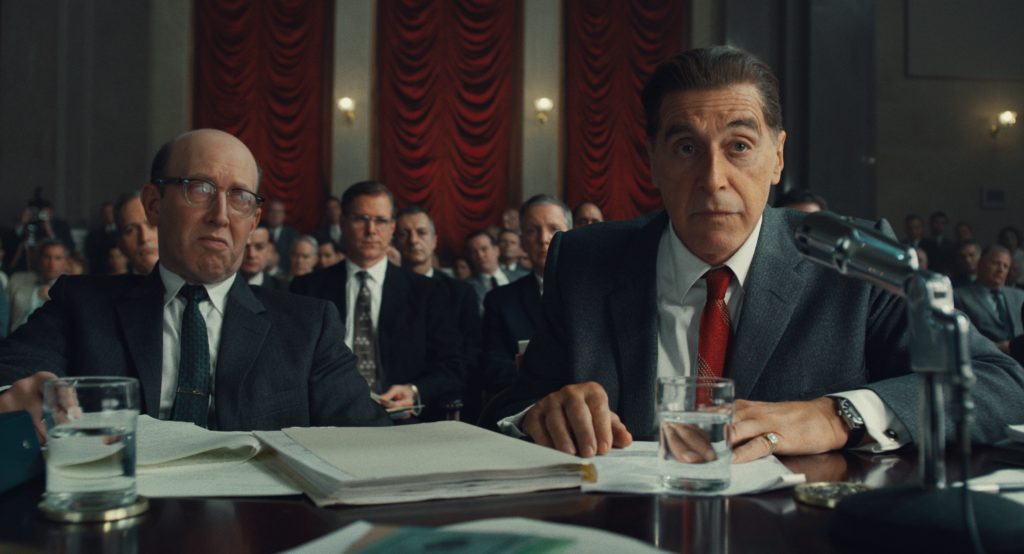 The fact that everybody knows what happened to Jimmy Hoffa (or, rather, knows what they don’t know) is a feature of The Irishman, not a bug. The first we see of Frank is not the fresh-faced delivery man looking to get made, but a wheezing, elderly shell, hunched over in a wheelchair in the common area of his nursing home (in addition to being digitally de-aged, several of the leads are eventually aged up via seemingly practical effects). Likewise, the introduction of each supporting character is accompanied by a caption revealing the year and circumstances of their death (the phrase “shot several times in the head” tends to come up a lot). Scorsese’s films, particularly his crime films, have occasionally been criticized for glamorizing the lifestyle of their subjects. I don’t see this issue being raised in the wake of The Irishman; even the characters who don’t become “house paint,” in hitman parlance, tend to end their lives fairly ignominiously, frail and bitter and frequently incarcerated.

This melancholy is only amplified by the performances. In the lead-up to The Irishman, much was made of the fact that its leads were digitally de-aged for the majority of the film (likely leading to its astronomical $160 million price tag). As in other recent films to use this device, the effect is a little waxy and uncanny to begin with, but it’s used so seamlessly and consistently that your eye gets used to it. What’s interesting, though, is the way that it plays with your familiarity with the actors as young men. This isn’t so much an issue with Pacino (who gets to disappear into the embodiment of a well-known public figure) or Pesci (who’s always kind of carried himself as a cranky little old man), but it’s fascinating in the case of De Niro. No amount of digital trickery can turn the Robert De Niro of 2019 into the nervy livewire of Mean Streets, or the sleek mafioso of Goodfellas. Instead, we effectively see an alternate universe De Niro, who, only in his late thirties, already walks with decades of gravitas under his belt.

Yet it would be a mistake to describe these as “old man” performances. Whether through the strength of the material or the thrill of working with Scorsese, just about everyone involved gives their best performance in years. Pacino, in particular, is a delight, relishing his role as the tough-talking, ice cream-loving labor boss, pitching him somewhere between General Patton, a professional wrestler, and Joe Flaherty as Guy Caballero. Pesci essentially plays a wry, slightly wizened version of The Joe Pesci Character, and it made me realize how much I’ve missed him as a presence. Other actors, like Ray Romano as Bufalino’s mob-lawyer cousin and Jesse Plemons as Hoffa’s shifty stepson, only get a few scenes to flex their chops, but each manages to walk away with a few stolen moments**. The crux of the film, however, rests on De Niro’s slumped shoulders. This is a tale of mob intrigue, but from Frank’s perspective, it plays something close to a love triangle. As things barrel toward the inevitable, Frank tries his best to maintain balance between these two men who he not only respects as mentors, but genuinely loves as friends. Speaking to Hoffa over the phone, his voice cracks with helplessness; later, while receiving orders from Bufalino, De Niro seemingly glances into the camera more than once, as if to grimly acknowledge to the audience that he doesn’t like this any more than they do. 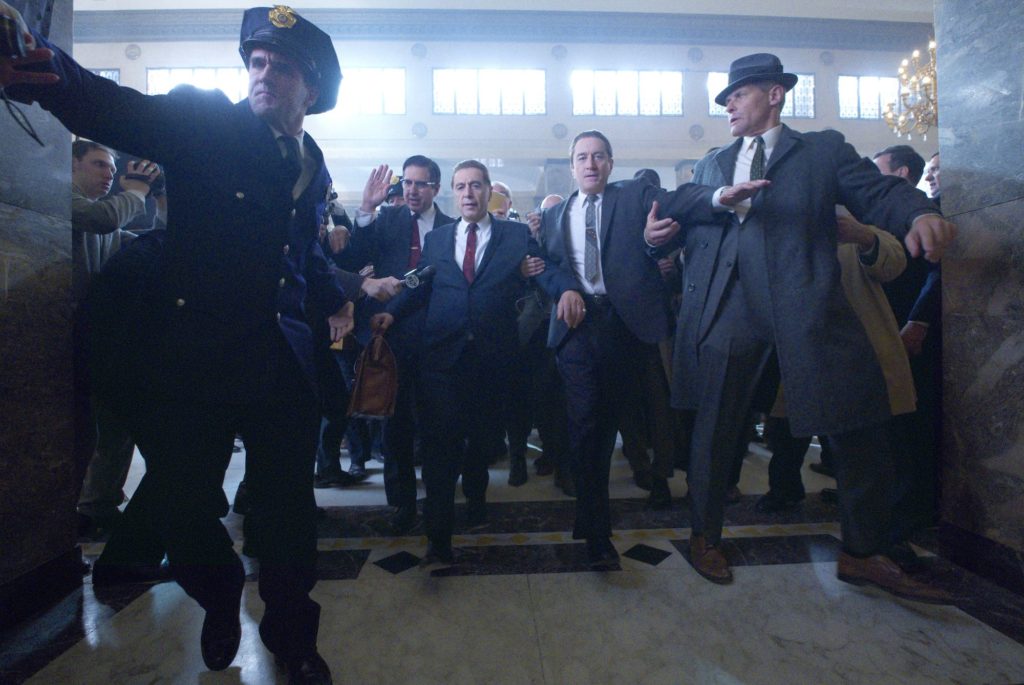 The Irishman will inevitably be compared to Goodfellas, Scorsese’s other decades-spanning mob opus, but the differences are as illuminating as the similarities. Goodfellas crackles with a Time-Life compilation’s worth of golden oldies, and while The Irishman has its share of needle drops– a “Sleepwalk” here, an “In the Still of the Night” there– it’s a much quieter affair. When Frank is behind the wheel for his last fateful round of errands, there’s no jittery narration or swirling Nilsson/Who medleys buzzing through his head; it’s simply an aging man sadly driving through a quiet residential neighborhood before doing something horrible. Unlike Henry Hill, Frank Sheeran never takes any particular joy in his work, apart from the companionship of his friends and mentors. He simply takes it as his job, no different than if he kept driving the truck. It’s just more lucrative.

Yet despite its heavy themes of duty and mortality, The Irishman is never a slog. I’ll admit to having apprehensions about its gargantuan running time, but I never once found myself getting antsy or checking my watch. The Irishman is simply a pleasure to watch, handsomely shot and wonderfully alive. It’s also surprisingly funny in parts, as these characters, who we’ve already seen planning and committing monstrous acts, bicker like old married couples about the most unimportant minutiae (so much mobspeak is coded as innocuous patter that one senses they no longer see a distinction). When a filmmaker at the height of his powers is given free rein to pursue his passions, the result can scarcely help but be a treat. The height of Scorsese’s powers has thus far lasted nearly half a century; I see no reason to doubt he still has some masterpieces up his sleeve.

* – Peculiarly, while the title of this film is, by all official accounts, The Irishman, the opening titles identify it only as I Heard You Paint Houses (the title of the book on which it’s based); the closing credits include both on separate title cards. I have not read any official explanation as to why this is, but I can’t help but wonder if Netflix’s algorithmic masters favor a punchier title. If Orson Welles were alive to be negotiated with in 2018, would The Other Side of the Wind have been retitled The Last Party, or something similarly banal?

** – There have been complaints that Anna Paquin, as Frank’s eldest daughter, only gets two lines of dialogue. As with similar questions raised about Margot Robbie’s role in Once Upon a Time in Hollywood, this does a fairly glib disservice to Paquin’s work. Peggy Sheeran’s disapproval and silence haunts Frank like a ghost through the entire film, and requires a nuanced performance. Peggy is not a central character, but the way Paquin brings her to life is quietly devastating, and the film would be less without her.