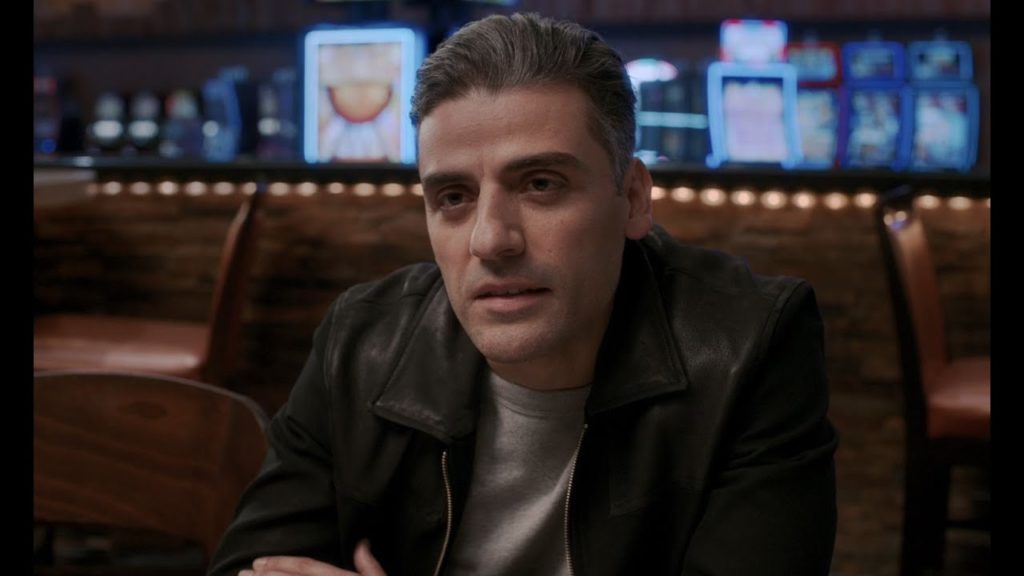 A man who calls himself William Tell (Oscar Isaac), recently out of prison, is putting his card counting skills to the test in casinos across the eastern United States. One night he is approached by a woman named La Linda (Tiffany Haddish) offering to back his entry fees and get him into higher and higher stakes games. Though he turns her down at first, his mind changes after meeting a young man named Cirk (Tye Sheridan) who seems a kindred spirit, though more impulsive than Bill. The trio hit the road, learning things about each other while Bill racks up the wins at the poker tables. Of course, Bill’s military past can’t stay buried forever, and his former commanding officer seems to be haunting his waking life as well as his dreams…

Directed by Paul Schrader, an innocent man who has never posted anything completely demented on Facebook, The Card Counter is a phenomenal story of a man tormented by his most gruesome demons, anchored by a sublime performance from Oscar Isaac. This is the role we’ve been waiting for Isaac to get since Inside Llewyn Davis, a role nearly as good as Ethan Hawke in First Reformed. It’s not fair to compare the two, though inevitable, as this is Schrader’s first feature since the story of a priest driven mad by climate despair. Nothing can compare to First Reformed, which is simply one of the best things to ever happen. But The Card Counter is a tight story starring great actors doing good work without a ton of CGI or fake backdrops cluttering the visual space. Who knew we were still capable of such a thing?

Schrader has built a career on films that are actually about something. From Taxi Driver to Blue Collar to Patty Hearst to… I guess Cat People (I haven’t watched it, seems like a whole thing), Schrader likes to climb into the minds of maladjusted men and the societal problems that cause them. The Card Counter is no different, though it trades climate anxiety for Bush-era PTSD and Abu Ghraib. Bill is of course haunted by the torture in which he participated, feeling that nothing he does can redeem him. The Abu Ghraib scenes are shot with some kind of fish eye lens, making the whole experience even more nauseating and disorienting. Nothing on screen is gratuitous, but it still leaves you with a sickly feeling. Schrader doesn’t want you to turn away.

The chemistry between Oscar Isaac and Tiffany Haddish is electric, even when they’re just sitting beside each other at the bar. While he can’t match Isaac or Haddish, Sheridan does well in the role of “aimless shitbag young adult.” It’s just enjoyable watching these three work, especially when the drama escapes the poker tables and has dire consequences. There’s something about the way Schrader shoots conversations that just keeps you a bit on edge. Many of his visual cues from First Reformed are repurposed here to stunning effect. I can’t stop thinking about the final shot.

After this summer where I just kind of saw every big movie just to be in the air conditioning, it was nice to see an actual film. The Card Counter is worthy of the big screen experience, definitely amplified by your undivided attention. And let’s go easy on Oscar. He couldn’t have known Star Wars would flame out like that.