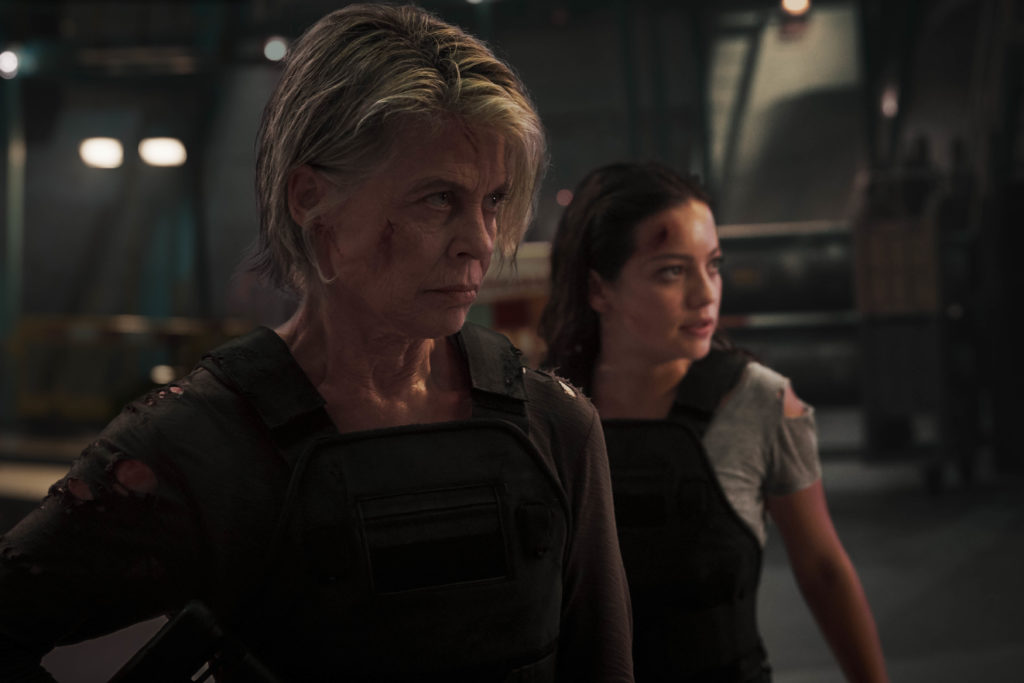 The fact that this film exists at all is depressing, but at least it’s not a disaster. Terminator 2: Judgment Day provided a perfect ending to the saga of Sarah Connor back in 1991. Then, for some reason, someone made Terminator: Rise of the Machines. It wasn’t great. Then, for some reason, someone made Terminator Salvation, which was terrible, but the arcade game remains a permanent fixture in most American movie theaters. Then, for SOME REASON, someone tried to reboot the franchise with Terminator: Genisys, which I’m told is an abomination because I refuse to watch it. The Terminator franchise has more bad films than good ones. So what does James Cameron do? In the style of last year’s Halloween, Cameron has decreed that the sequels after Judgment Day are no longer canon. So, after all of this, Terminator: Dark Fate, directed by Tim Miller (Deadpool) and written by Cameron, is the new and improved Terminator 3. But is it worth it?

Terminator: Dark Fate still negates the happy ending of Judgment Day, but at least Linda Hamilton returns as Sarah Connor after sitting out the bad films. Hamilton fully commits to the role, guns ablazing. However, she is not the Terminator’s target. That dubious honor belongs to Dani Ramos (Natalia Reyes), a Mexican factory worker who has no idea what the future holds. The new Terminator, Model Rev-9 (Gabriel Luna), is stopped only by augmented human Grace (a ripped Mackenzie Davis), who has also come from the future to protect Dani. You know the drill.

My audience rightfully cheered when Hamilton arrived on the scene with an enormous rifle, knocking the Terminator off a bridge. Sarah Connor is still a haunted woman, tortured by the future she changed and everything she has lost anyway. She cracks a lot of jokes, but she doesn’t smile. The film keeps her at arm’s length, mostly to its benefit. She is the old master now, ready to train Dani and Grace in the art of Terminator hunting.

Schwarzenegger, the franchise’s poster child, obviously returns, though the explanation for his inclusion is sweaty at best. It’s not worth thinking too hard about! Arnie remains adept at fight sequences, though much of the second half of the film is obscured in darkness. He provides a lot of the humor as well, which was welcome after long truck chases and a stressful attempt at crossing the US-Mexico border. (The film is alllllmost political in this set piece, but doesn’t get too far before just going back to robot fights.)

Overall, Terminator: Dark Fate is the best Terminator film since Judgment Day, but that’s not saying a ton. It was coherent, most of the action felt like it had real weight, and it didn’t lose itself in weird time paradoxes or future scenes. Maybe it’s just nice to have Linda Hamilton back on the big screen, doing what she does best. Out of the movies I’ve seen this year that don’t need to exist, it is certainly better than Maleficent: Mistress of Evil.