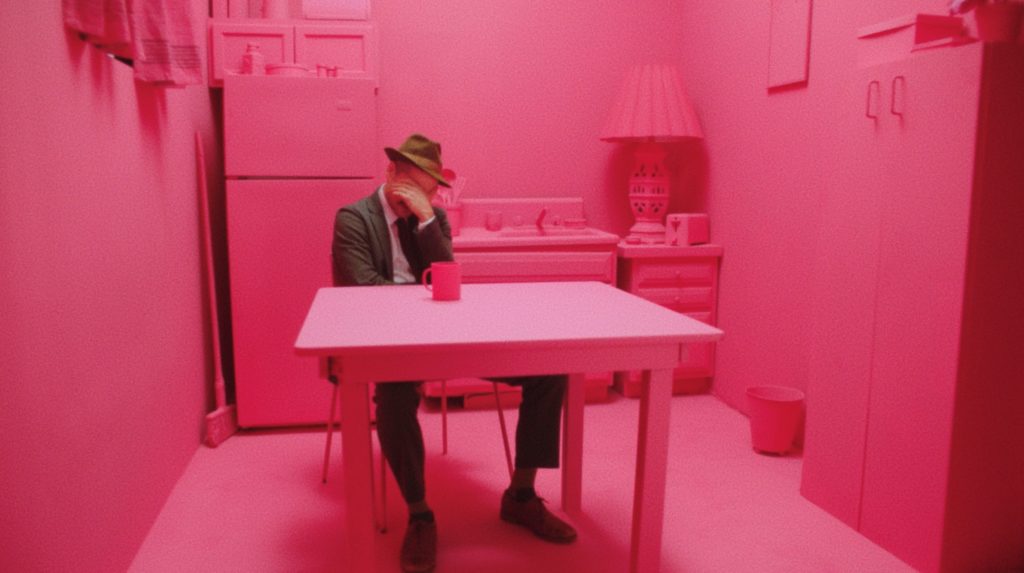 When one is asked to think of a science fiction film, they will generally picture a special effects bonanza: mile-long spaceships and CGI aliens and world-famous movie stars running around in front of greenscreens. But the beauty of the genre is that a nifty enough idea can be just as successfully pulled off on a college student’s budget. For every Star Wars or Avatar, there are any number of dazzling low-budget sci-fi gems, from Jean-Luc Godard’s Alphaville and George Lucas’s THX 1138 to last year’s delightful time-loop comedy Beyond the Infinite Two Minutes. Strawberry Mansion, the new film from mumblecore vets Kentucker Audley and Albert Birney, doesn’t look like it was made for more than a couple hundred dollars and a few trips to the hardware store and the thrift shop, but it presents a world as immersive and fully realized as anything you’re likely to see at the multiplex.

Set in the not-too-distant future of 2035, Audley plays James Preble, an IRS agent with an unusual beat: he’s a dream-auditor. In this world, you see, dreams are automatically recorded, and taxed based on their relative production value (a dandelion, valued at $1, is taxed a few pennies; more expensive items, such as a violin or a live buffalo, run at a higher rate). Worn down by the grind of his numbing job (and plagued by unsettling dreams of his own), Preble’s life becomes more interesting when he is dispatched to the home of one Arabella Isadora (Penny Fuller), an eccentric, elderly artist with an enormous backlog of dreams on VHS (she resisted the transition to flash drives some years back). As Preble scans his way through the tapes, he becomes infatuated with Bella’s younger self (beguilingly played by Grace Glowicki), and slowly becomes aware of the intrusive advertisements seemingly being inserted into his own dreams. Realizing he’s learned too much to go back, Preble decides he needs to find a way to save the girl of his dreams– and his own life. 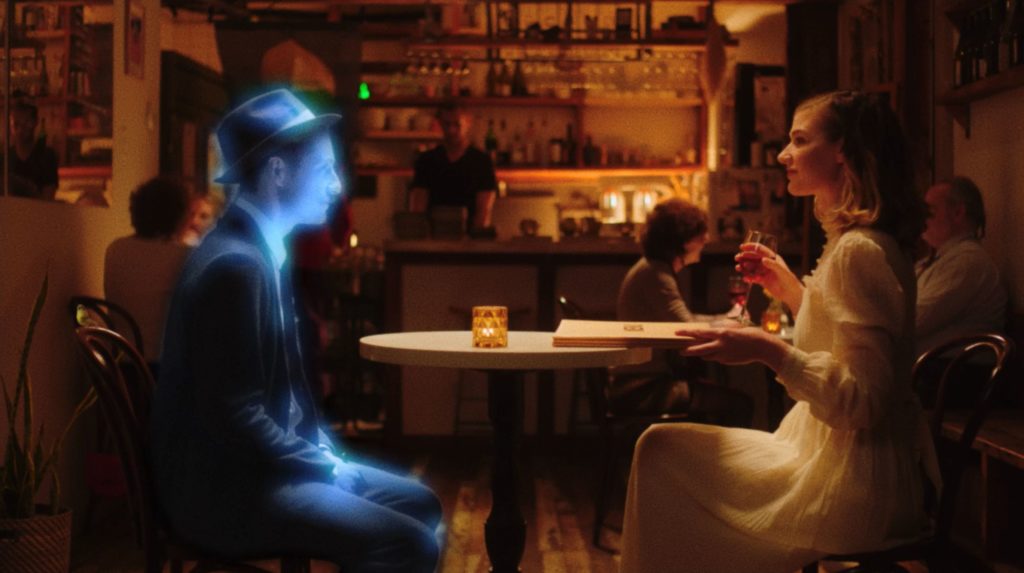 In broad strokes, Strawberry Mansion somewhat resembles such achingly metaphorical sci-fi indies as She Dies Tomorrow (in which Audler has a supporting role) or Starfish, films which I generally respect, but ultimately find too precious by half. Strawberry Mansion, however, earns its quirkiness by being boundlessly inventive and unflaggingly, unapologetically weird. In nearly every scene, Audler and Birney seem to find a new idea to throw at the screen– some conceptual, some visual, some seemingly the result of a bizarre inside joke– and they rarely slow down long enough for the viewer to question any of it. At any given moment, you might see a talking fly caught in a spider’s web warning our hero of danger, or a touching soliloquy about the transience of love, or a waiter with the head of a giant frog and a soothing baritone voice. The whole thing is anchored by Audler’s performance, which takes in the madness around him with a delicate mix of earnestness and Keatonesque stoicism. Like him, we navigate this world with simultaneous bemusement and awe.

One of the most distinctive aspects of Strawberry Mansion is its commitment to the tactile. While there are flashes of rudimentary CGI (and a few well-deployed moments of stop-motion animation), the vast majority of the props and special effects are practical, and clearly made by hand. Even objects which are ostensibly the product of the characters’ imaginations take on a physical heft; when Preble dreams of a kitchen in which every utensil and food product is painted Pepto Bismol pink, you can see the brush strokes. At this point, we have become so used to fantastical imagery being rendered via computer that there is a strange sort of wonder in seeing effects constructed from duct tape and scrap. The result is something of an uncanny valley– but not an unpleasant one.

Curiously, this handcrafted feel seems to extend to the film itself. As Audler and Birney revealed in an interview with the Hassle’s own Kyle Amato at last year’s Sundance, Strawberry Mansion was shot digitally with vintage lenses, then transferred onto 16mm film once it was complete (and then, of course, transferred back to digital for streaming and DCP prints). The resulting sense of unease is amplified by Dan Deacon’s immersive score, which bathes the film in a wash of kitschy retro synths (think John Carpenter filtered through latter-day Williamsburg). The result is a film which feels out of time– too retro to be futuristic, too strange to be dated to any recognizable past, and certainly not something that looks like anything made in 2022. 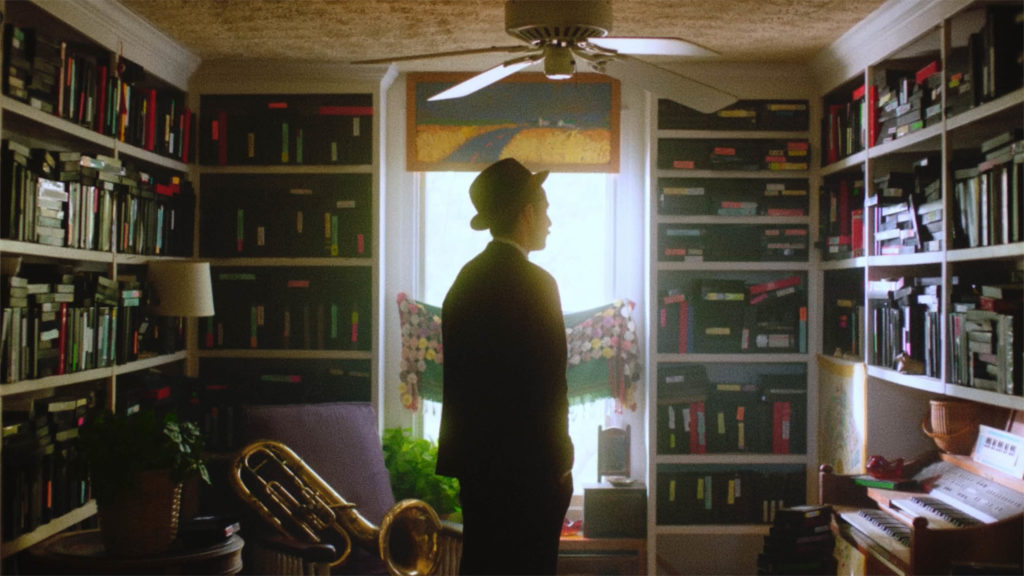 Of course, all of this would amount to little more than weird for weird’s sake if it weren’t grounded in a core level of humanity. Like the best science fiction, Strawberry Mansion seizes upon an anxiety of our times and carries it to its logical (if fantastical) conclusion. Anyone who’s scrolled on a smartphone, after all, is familiar with that nagging sense of unease as their various feeds are interrupted by increasingly tailored ads, forged by algorithms harvesting their personal data and unconscious patterns. In a world where one of our dumbest “geniuses” is hyping up digital brain implants as we speak, it’s no stretch to envision a scenario in which our most intimate dreams are invaded by federal agents and corporate pitchmen. Bella’s way of life suggests an alternative: a life not necessarily “off the grid” in the sense that we commonly use the term, but surrounded by analog media and art– real art, made by her own hands, as opposed to some crude JPEG of a cartoon monkey. As we plunge further into our own stupid future, the simplest pleasures are becoming the most radical.

Strawberry Mansion is a small-scale film, and does occasionally fall victim to its limitations; the metaphysical love story does occasionally stray into the twee territory of the films listed above, and the visuals of the climax finally see the filmmakers’ ambitions rub up against the bounds of their technical capabilities. But this is still a very special film, bursting at the seams with originality, good humor, and sheer aesthetic pleasure. Like the VHS tapes of Arabella’s dreams, it feels both out of time and not quite of this plane of reality– and, like Agent Preble, you might just fall in love watching it.